New (old) Comic Weekend Round Up

My work takes me out of town quite a bit and in each city I have a few places that I like to visit and look for good deals. While in Greensboro, NC late last week I went to the local McKay's Bookstore specifically to check out their comic selection. Last time I was there I noticed long boxes of comics as I was leaving so I didn't have a chance to go through them. I'm glad I went back on my next visit to the area because I found some good stuff in their long boxes marked "Discount". 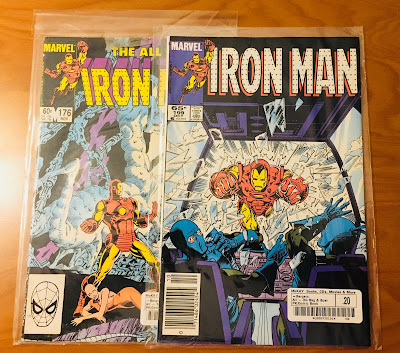 I'm a sucker for the classic Marvel characters and Iron Man has always been a flawed character I enjoy reading. To say the least I was surprised to see some earlier issues of his original title in the box. And yes, you are seeing correctly...the price tag for these books were just $.20 each. 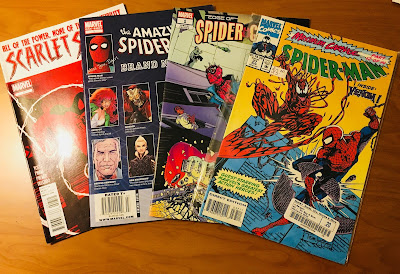 I'm always on the lookout for Spider-Man books and I found a few I didn't have. I was surprised to find the Maximum Carnage issue of Spider-Man, let alone for $.20. For some reason there were even new comics in the discount box so I grabbed the Spider-Punk variant of Edge of Spider-Geddon #2. The Amazing Spider-Man Brand New Day Yearbook was new to me and featured bios and more for many of the key players in the controversial Brand New Day storyline. Lastly was one more issue off my want list of the Scarlet Spider (Kaine) solo series. 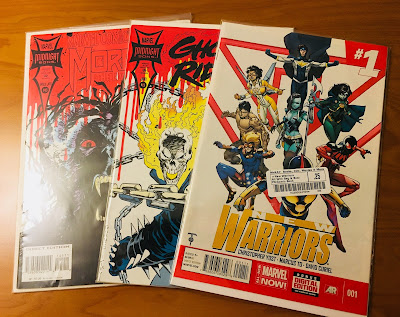 There are a few storylines I'm piecing together featuring the some of Marvel's supernatural characters. I was thrilled to pick up these two issues of the Midnight Sons story. The New Warriors #1 set me back a quarter, and even though I have this entire run I couldn't leave the first issue behind. 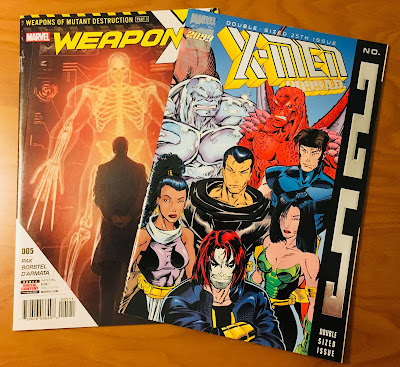 The first book I found in the discount boxes was X-Men 2099 #25, one of 3 issues I lacked. I was so excited to find it though I failed to give the book a good look over. Once I got back to my hotel I noticed that the book had a big crease along the back of the cardstock cover. Bummer, but it was only $.20 so who am I kidding? I've also been buying the current Weapon H book, but I missed out on his introduction in Weapon X. Found issue #5 and I figured why not for $.20?

I arrived home late Thursday night, only to have to hit the road again Saturday morning. this time I  had to make the short trip down to Greenville, SC to take care of some business on Saturday afternoon. I decided to take my family with me and make the trip a little family outing. The time turned out to be pretty perfect for me as one of the local comic shops there, Borderlands Comics & Games was having a Halloween sale where pretty much everything in the shop was discounted. The real draw for me however were all of the long boxes out on the covered sidewalk that were $.50 a piece.

Right off the bat I found a nice run of John Byrne's run of Amazing Spider-Man, issues that I rarely see even in dollar boxes. Very happy to find these to say the least. 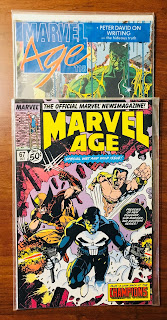 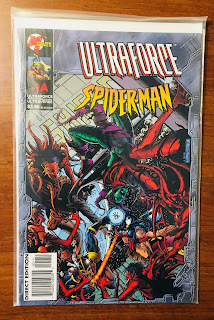 I don't always buy Marvel Age books, but for some reason I had issue #67 on my want list. I grabbed the other because I thought it was still sealed in it's polybag, which it wasn't, but still came with a cool Fleer Marvel Masterworks promo card of the Hulk. I'm slowing piecing together the Malibu Comics tie-in issues with the Marvel Universe and this UltraForce/Spider-Man was one I've yet to find. 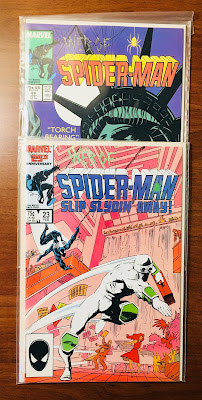 Of course I'm going to pick up any Spider-Man book I don't already have, especially at $.50 and these earlier issues of Web of Spider-Man I didn't have. Volume 2 of Strange Tales I've owned before, but I must've purged them at some point. Initially I skipped over these until I saw nearly the whole run.

Before I hit the cheap boxes by myself, the family started off inside, taking a quick look at the new comics. I wanted to show my wife the new Rainbow Brite comic by Dynamite, but she wasn't interested. In fact, she was turned off at how the art from the cover and the inside varied! I love her innocence! We then moved over the displays of Pop! figures as my daughters have both started to take a liking to those. 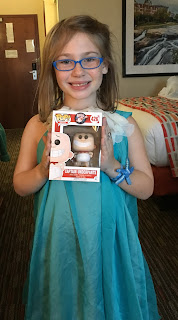 Let's just say my youngest daughter, Winnie, was thrilled to find a Captain Underpants Pop! figure. I didn't even know that one existed. I like how my daughters are starting to like things similar to me, but branching out on their own. They like what they like for their own reasons, but just because daddy likes comics and such.

After our trip to Borderlands, we proceeded to get checked in at our hotel and took a little rest before venturing off for dinner and to head to one last store, Mr. K's Used Books, Music and More. I had been to this bookstore once before and I knew they had a section of comics, but last time I looked I didn't find too much. On this visit I noticed a sign on the front door as we walked in that all their $1 comics were half price. Yes!! More digging through boxes I got to do. This time my digging was more eventful. 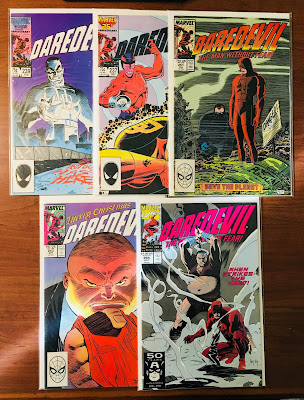 I don't own a lot of Daredevil and it's a title I only pick up if I can find for the right price (i.e. cheap). I was never a huge fan until the Netflix series came along. I'm slowing piecing together a small run of his. 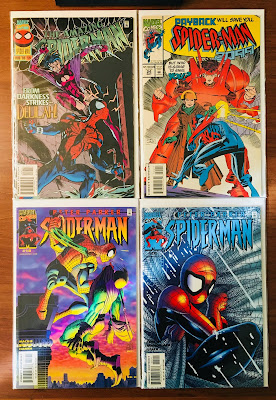 Four more Spidey books I needed. Especially happy to find Spider-Man 2099 #24. All I ever find of that title are the really early issues. 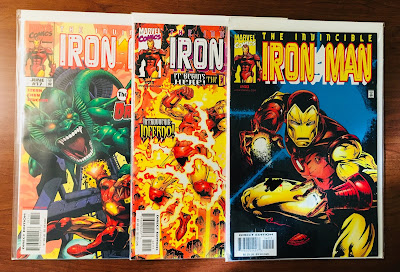 Slowly getting close to finishing vol. 3 of Invincible Iron Man. Isn't the cover to issue #40 beautiful? 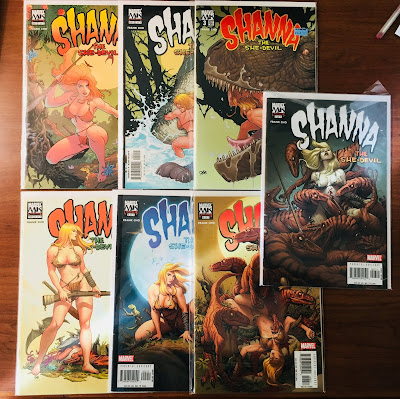 Last but certainly not least I found the entire 7 issue mini-series of Shanna the She-Devil by Frank Cho. As I was flipping through my stack of books getting them organized my wife came over and made a comment about how scantily clad she was. That's when I had to point out to her that she lived in the Savage Land and that was the normal attire. Not sure if she understood or bought it (doubt it), but alas to the register I went to check out.

All in all it was a great week for comics. I told my wife as we were loading the car Sunday morning to come home that I felt as if I had been to a comic convention because it sure felt like it with all the new old books I acquired. Well that's it for now. Let me get back to editing photos for items I'm adding to my eBay store and get to work on typing up my next toy post for this blog. Until then...
at 7:40 PM