Halloween is almost here and I have only managed to watch a few new horror movies this month. Shameful, right? The other night I made the decision to watch a movie, but what movie? Would I re-watch something I've seen before? Grab a DVD off my shelf? Or search out something new. I opted for the latter and began to browse the offerings on Netflix.

I've said before in the past that I've been disappointed in modern horror for the most part as most new movies seem to fall into the supernatural sub-genre, a genre that I just usually don't care for. I was having a hard time finding a movie until I ran across Cargo and instantly stopped. Why did that name sound so familiar? Then I remembered a 7 minute short film from years ago my older brother told me about that shared the same name. I was a fan of the story, though short, and had no idea it had been turned into a feature length film.

Before I jumped into the new movie, I had to re-watch the original short from 2013. If you haven't seen it before, you need to watch as it's a clever film and take on the zombie genre.

The 2017 version of the film was produced by the same people that brought us The Babadook, another recommended film I'm told. This new full length movie takes the core of the 7 minute short and expands on it, giving more of the backstory and continuing the story in a sense. 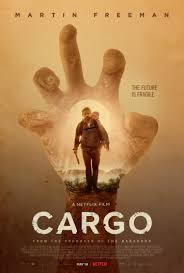 Cargo stars Martin Freeman as Andy and Susie Porter as his wife Kay and a pair of twin babies that play the role of their infant daughter Rosie. The movie opens with them on a house boat floating down the river in the Australian outback. You know they are trying to escape to safety, a military base, but you really don't know what's going on or why. You just know that they "acquired" the house boat and while trying to get to the military base their food supplies are running low.

You get more of an idea of what's going on after his wife is attacked, Andy looking through a pamphlet of what appears to be a part of a government supplied safety kit of sorts. Apparently there is a virus going around effecting people and turning them into zombie like creatures. I will point out the zombie description/word is never used and most of the attacks are implied and not shown. In fact, the "zombies" are actually called "diggers" once or twice, thanks to their desire to dig holes and stick their heads in the ground. Something about being attracted to darkness that leads them to do this.

Andy's main mission is to get his family to safety, but after his wife is infected he knows that mission has just become a lot tougher. Fast forward the story a bit and Andy becomes infected himself...which is partly his fault. In the kit he went through earlier was a large needle like device that an infected person could use to end their life, thus not spreading the infection further. The infection by the way may have seemed to be airborne at one time, though the cause of the outbreak is never mentioned, but hinted at in a few scenes. The infection spreads through biting a non-infected person.

If you're like me then you wonder "what if?" a lot of times during movies. Andy's wife was set to accept her fate and be left behind, yet Andy thought he still had time to get her to a hospital and save her before the 48 hour time frame for the infection to spread had elapsed. Because he dragged her back into the car she wound up dying and turning, biting Andy in the chaos.

If Andy thought his mission to protect his family was tough before, well he just jumped out of the frying pan and into the fire. He has 48 hours before he is completely infected to find a safe haven for his daughter in this post apocalyptic world.

I really don't want to give away any more of the movie than I already have (even though I really haven't spoiled much, especially if you watched the original short film), but let me just say that there is a reason Netflix categories this film more of a thriller than horror. There isn't much gore, again with a lot of things happening off camera. The language isn't too harsh and there isn't any sex or nudity. At the core of the story is human survival and how fragile life can be. Martin Freeman does an excellent job in this film and you quickly find your heart going out to his character of Andy and their daughter Rosie. It's a slow burn at times, but the pacing I thought helped the overall story. There are some incredibly sad moments and even I felt I would become emotional at times, however if you'll stick with it you'll see that it's not all doom and gloom.

I really enjoyed this re-visioning of the Cargo short flick and had wished my wife had stayed up to watch it. She doesn't always care for horror, but since this is movie doesn't follow the traditional horror tropes I believe she'll like it. If you have a current Netflix subscription and enjoy zombie movies or just horror/thriller movies in general, I suggest you check this one out while you can.
at 8:54 AM