This past Sunday I had the pleasure to once again hang out with my older brother for a few hours as we talked comics and searched boxes for comics. The Charlotte Comic-Con was held in Concord, NC at the Embassy Suites Convention Center. We headed up after church so I don't know what the crowd was like in the AM when the doors opened, but it was crowded. The crowd seemed to dissipate shortly after we got there due to the nasty storms that were coming through the area. At one point, the whole sales floor was flooded with weather alarms as the storms got closer. We decided to stay there through the storms and I'm glad I did because I found a few books right before we left that I really hadn't been searching for, but wanted. 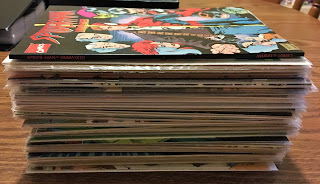 For the most part I stick to the cheap boxes, especially when my funds are limited (like they were Sunday). We generally search the room for the cheapest boxes and then start there. Occasionally I work my way up to the dollar boxes, however this trip there were plenty of books to be found in the $.50 boxes...just take a look at my stack! 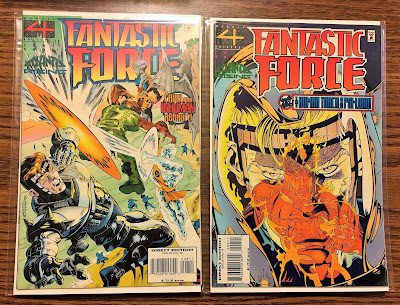 I didn't realize the old Atlantis Rising story ran through the short lived Fantastic Force series, but I found the two issues from the story. I believe these were the first books of the day that I found. 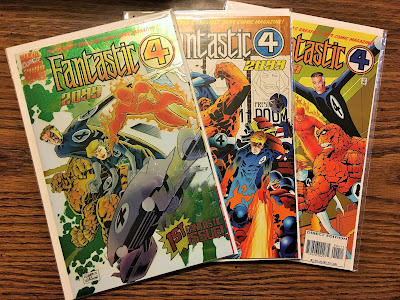 I started with X-Men 2099, then Spider-Man 2099 and slowly branching out to some of the other 2099 titles. Apparently I already had a few issues of Fantastic Four 2099 so it made sense for me to pick up these. Issue one has a nice chromium cover. 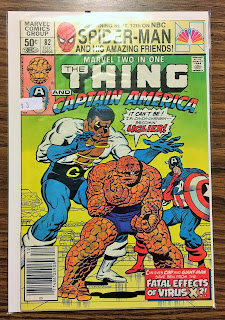 Moving across the aisle I found a dealer who had a lot of $.50 boxes...all on the floor. I knew immediately this was going to be a long and painful day for my back!! One of the first books I pulled out was this Marvel Two-In-One featuring the Thing and Captain America. Anything Cap that I don't own I usually buy...and hey, I got it for cover price! 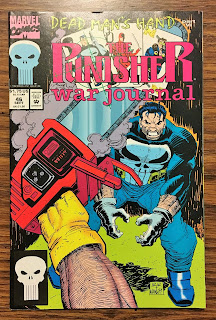 I haven't decided if I'm going to actively search out Punisher books, but I came across this one with part of the Dead Man's Hand story line that also ran through Daredevil and Nomad. 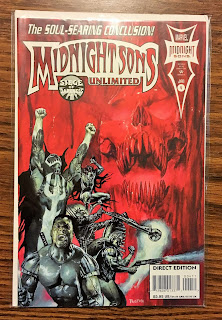 I don't believe I've ever seen this Midnight Sons Unlimited title, but this one has the final part of the Siege of Darkness story. Love the cover. 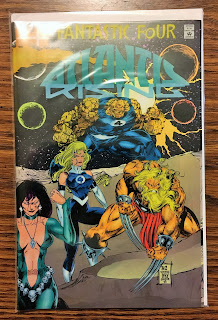 Speaking of the Atlantis Rising story, found issue #2 of the limited series. Love gimmicky covers like this clear acetate cover. 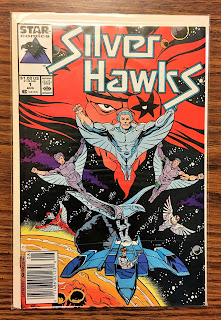 I actually already have Silverhawks #1, but I couldn't pass it up at $.50. I figured someone reading this blog may need/want this comic... 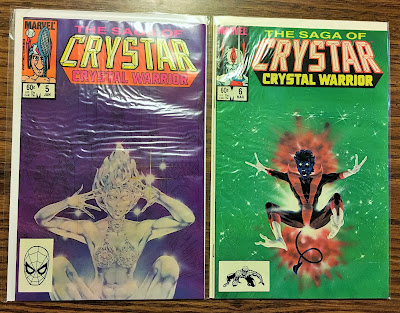 I'll buy comics of just about any series based on 80's properties/toys. These are my first Saga of Crystar, but I seem to recall seeing these issues in the cheap-o boxes in the past. 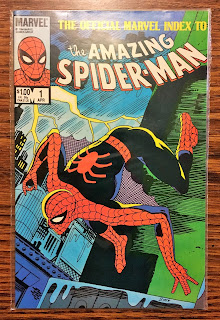 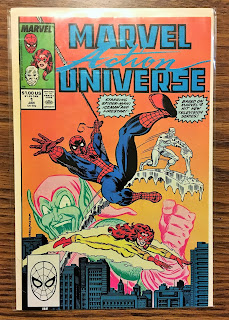 I could have sworn I already had this Marvel Action Universe, but according to my CLZ app I didn't. This contains the first appearance of Firestar in non-continuity. 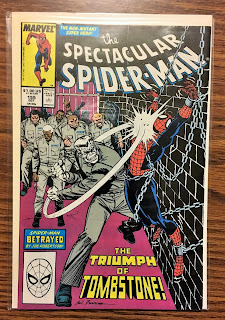 Nothing special, but this issue of Spectacular Spider-Man fills a hole in a nice little run I have. 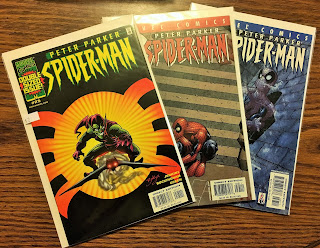 Three more books down in this series of Spider-Man. Oh so close to finishing this run. I believe issue #25 there w/ the Green Goblin in the cover is the alternate or variant cover. 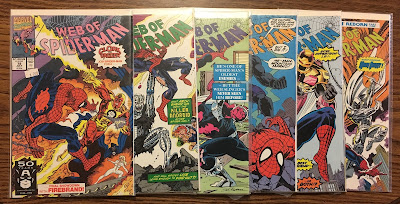 Web of Spider-Man is the one Spidey title I haven't paid a lot of attention to, however with these 6 books my Web collection is getting fuller and fuller. Still on the look out for a nice deal on a #1 direct edition. 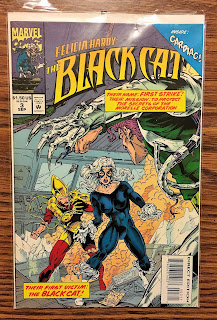 I've already completed several titles of Spider-Man related characters, but this is my first issue of Black Cat. Andrew Wildman of Transformers fame supplied the art for the cover and the interior. Looking forward to finding more of these. 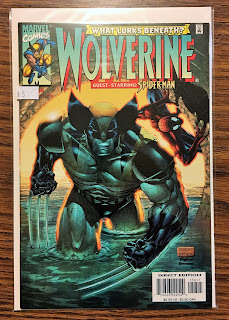 My brother who was helping me comb through all the boxes actually found this one. I grabbed it thanks to the Spider-Man appearance, but know nothing else about the issue. 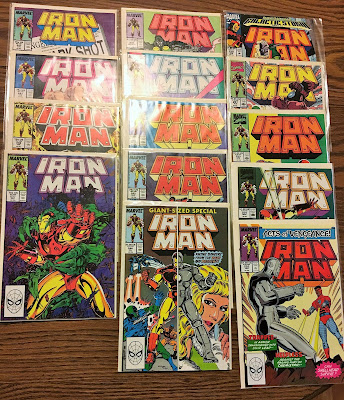 I've only recently begun to go back and pick up 80s/90s issues of Iron Man and I've already found several issues. I found 14 that I needed...actually more but some of them were too dogged for me to buy, even at $.50. I'm not the biggest Iron Man fan today, but I liked the his title and the character more 20 years ago. 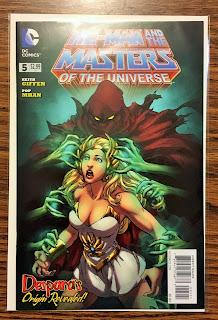 I originally bought the Image and later the MVC series of Masters of the Universe, but I never bought the DC title. Found this one lone issue so I grabbed it. Not sure what the likelihood of finding more will be at future shows. 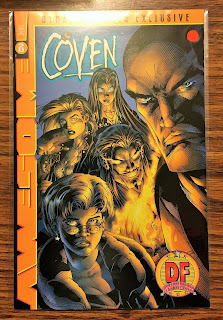 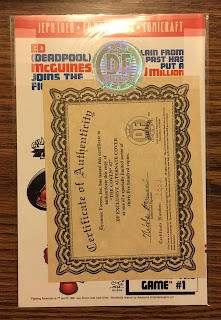 I skipped over this book, but my brother saw it and asked me if I needed it. The Coven is one of the few non-Marvel titles I collect. I'm going for a full set of covers since it didn't last that long and surprisingly this Dynamic Forces variant of issue #2 is one that I didn't have. Not bad for a $1. 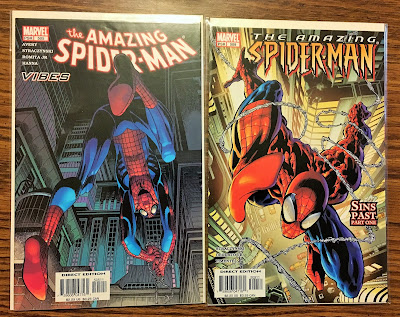 The last set of tables we stopped at before leaving had most of their books in alphabetical order. This was nice as it was late in the day and it helped me find what I was looking for a lot quicker. They had several issues of Amazing Spider-Man that I needed, but I settled with these two as I was down to using the quarters in my pocket. 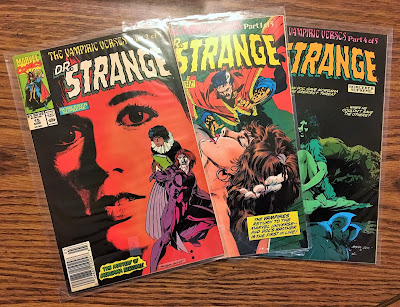 Most of you may know who that red image is on the cover of Doctor Strange, but just in case you don't it's Amy Grant. Yes, the Christian music recording artist Amy Grant. This image was lifted from her "The Collection" without her knowledge or permission. Amy sued Marvel Comics not for copyright infringement, but for the association of her image with the occult. She argued that it would negatively effect her music career. At this point in time she hadn't yet "crossed over" to the mainstream market. Amy and Marvel eventually settled out of court for an undisclosed amount of money. Today this book isn't hard to find, but this is the first time I've come across it in the cheaper back issue boxes. 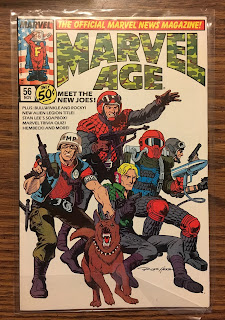 About the only comics my older brother buys these days (he's moved on to digital comics) he likes stuff like Marvel Age because it contains info, stories and art from the pre-internet days. I'll grab issues of Marvel Age for myself if there is a story that relates to my interests...such as #56 with a feature on G.I. Joe! 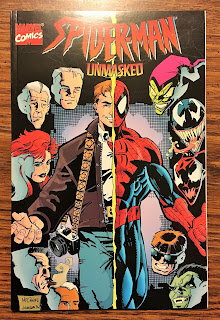 The final purchase of the day was this Spider-Man Unmasked book. It's square bound, not a normal issue. It retailed for $5.95 back when it was new and it contains small write ups on Spider-Man's abilities, along with his supporting cast of characters and villains. I flipped through it the other night and it's pretty cool. I've never seen this book before and nor had my brother.

Over all it was a great couple of hours spent at the show. This particular Comic-Con happens 3 times a year so I like to try and make it when I can. It's one of the best one day shows I've ever been too and always look forward to them. David Hinson and Rick Fortenberry do a great job putting on the show. Up next, HeroesCon this June!