Transformers have come in varied size assortments pretty much since the line originated in 1984, but starting with Beast Wars circa 1995 the different size classes weren't really named. While the names for the different sizes changes every so often, the toys remain for the most part, the same. I believe it was during the Cybertron toy line that Hasbro introduced yet another size assortment, then called Legends.

I immediately loved this new, more simplified scale. While I'm not against multi-step, complex transformations, sometimes it's just fun to have a small Transformer you can carry around with you and transform in a matter of seconds. The Legends scale is now being called 'Legion' in the new Robots in Disguise series. 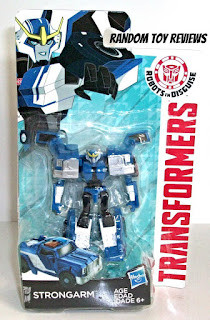 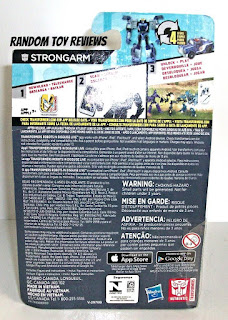 When I learned of this new RID series I was on the fence. I think it's a continuation of the Prime series, which is a good thing in my book. However the cast of characters has changed a bit. Carry over characters (Bumblebee, Optimus Prime) have been given a face lift while the series also introduces new characters. Strongarm is one of the new characters. Little did I know until later that Strongarm isn't a he but a she! Looking at the art on the packaging and by looking at her animation model, I can see the fembot aspects. Neither the Warrior class (aka deluxe) or this Legion toy do a very good job though at highlighting the fact that she is a she.

As with the Optimus Prime Legion toy I review previously, Strongarm is part of the new Transformers mobile app whereas you can scan the Autobot badge to unlock new abilities and weapons in the game. 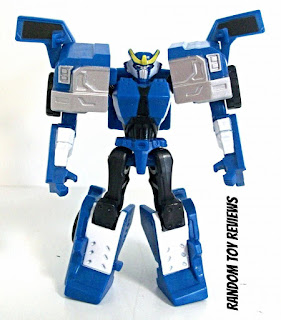 As a Legion class toy, I think Strongarm looks pretty cool. I don't know if I like the doors handing out there like wings, but you can find them in if you'd like. For a Legion class toy you get all the same points of articulation that you'd expect to find in this size. Ball jointed shoulders and hips with hinge jointed elbows and knees. Paint apps seem to be pretty good, although a bit limited. What I don't get is the face sculpt. Compared to the packaging art, this almost looks like a different head. Gone is the feminine looking face, replaced by a face shield. It isn't a deal breaker to me, but to some I know that will be a low point in the figure. 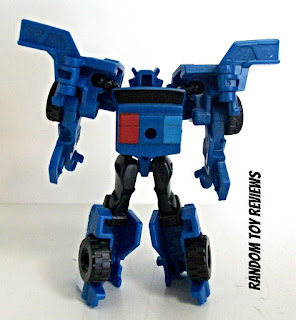 I've watched a few video reviews of the Strongarm Warrior class figure and I have to say this is one of those rare instances where I actually prefer the simplified version. At least the Legion class figure resembles a fembot. Yeah she has the bulky shoulders and all, but it works. Besides, up until now all the fembots in the Transformers mythos have been skinny. Who says a fembot can't have a little junk? 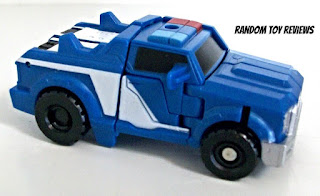 Usually the fembots get some super sleek and sexy sports car or motorcycle. Strongarm appropriately gets a truck alt mode. Small, compact and holds together white well. The wheels don't roll as freely as I'd like. I prefer the robot over the alt mode, but that doesn't mean the alt mode suffers from any real draw backs.

Strongarm is nice addition to the female cast of Transformers. It remains to be seen how she'll be protrayed in the new animated series, but from her looks alone I suspect she'll be one tough girl the Decepticons won't want to mess with. 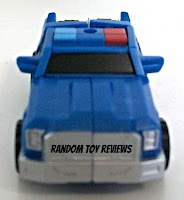 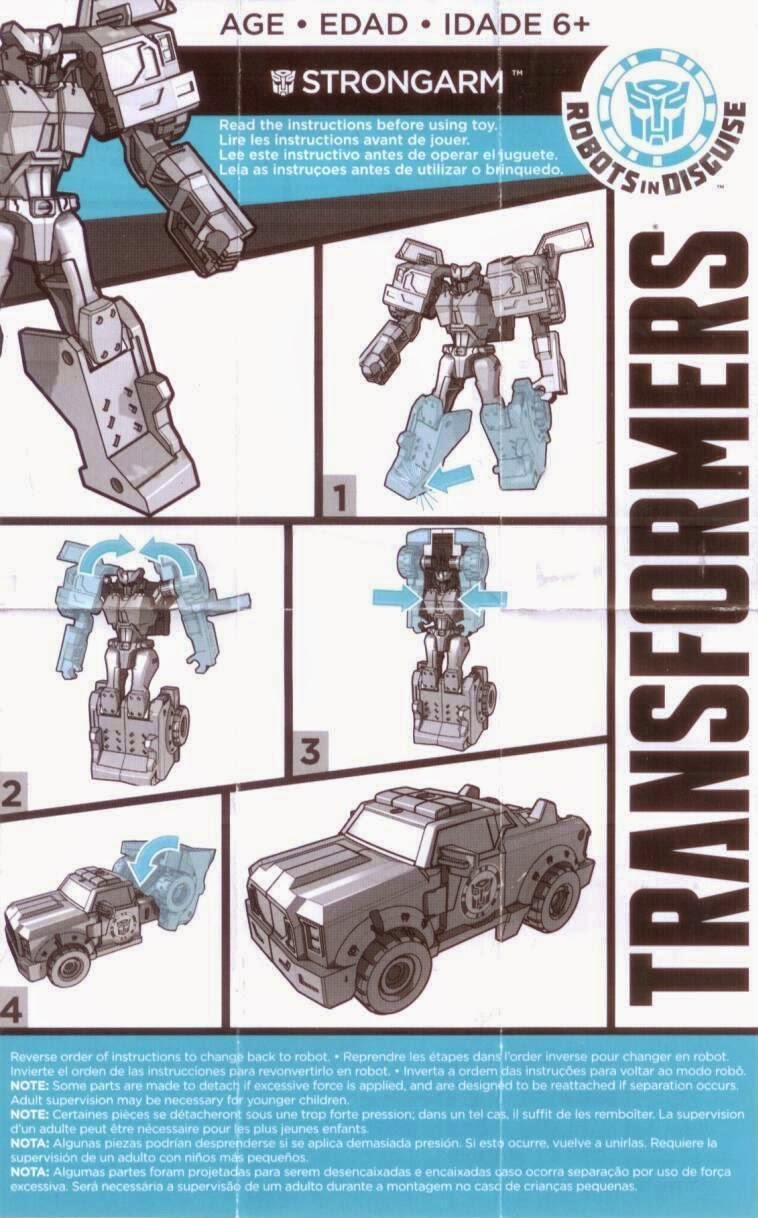 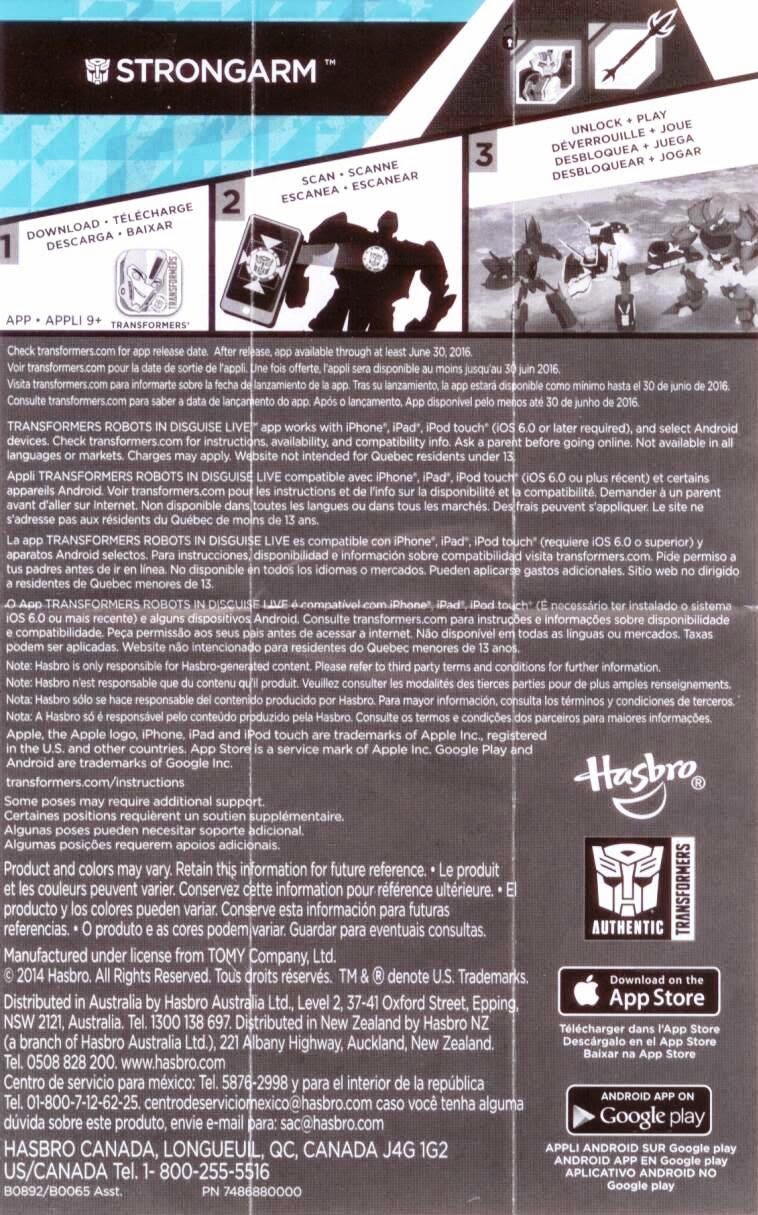