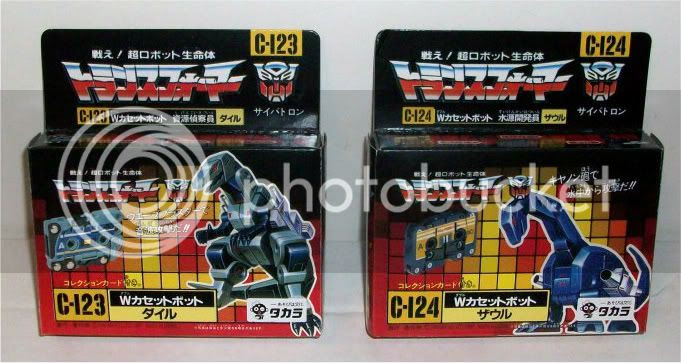 Why is it that in this day and age we still get excited about transforming micro cassettes?  The popularity of these Transformer cassettes has been undeniably popular over the years so it just seems fitting that Takara continued to produce for Japan.  While the U.S. got their own cassette combiners Japan was given two different sets of dinosaur combiners.  For many many reasons these cassettes would prove popular with many fans worldwide.  Why is this?  Was it because the toys were that cool?  Was it because they were dinosaurs?  Or that they were combiners?  Are these toys worth the stack of $100 dollar bills you'll have to drop on the secondary market?

This review will focus on the molds more so anything else.  Even though I have the reissue version I still wanted to take a moment and focus the spotlight on these cassettes.  I'll do my best to point out any differences between the originals and reissues, but my main point of this post is to give you the reader an up close look...especially if you are contemplating buying either the real deal or these reissues.

Bio:
Fleet of foot, can run at up to 200 km/h in dinosaur mode.  Both thumbs contain sensors that can rapidly detect energy.  Cheerful and brimming over with curiosity, Dial sometimes gets too carried away in his duties, leading to major system failures.  Carries Wave Blasters.  Combines with Zaur to form Legout. 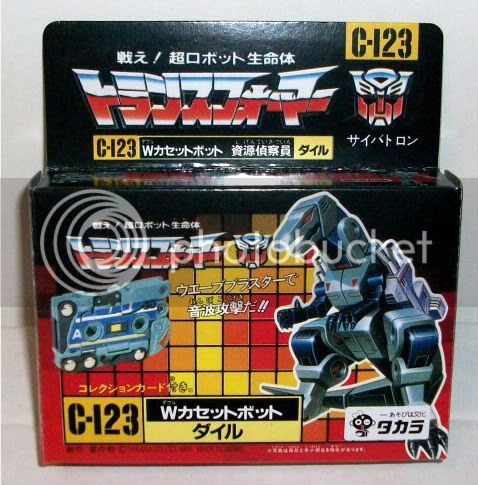 Let's start off by looking at Dial.  Originally released in 1987 as part of the Headmasters line in Japan.  I'm not an expert on dinosaurs so if I've labeled these the wrong species then please forgive me.  Dial appears to be some sort of t-rex.  First of the box art is a thing of beauty.  However like with many of the cassette artwork it gives you a false sense of what the toy will look like. The back of the box shows some small artwork of the combined mode, Legout.  Unfortunately since I don't read Japanese I have no idea what else is said on the back.  The quality of the box is rather nice.  These aren't printed out on photo paper.  These are small cardboard boxes that have been assembled.  I believe they are of the same size as the original boxes. 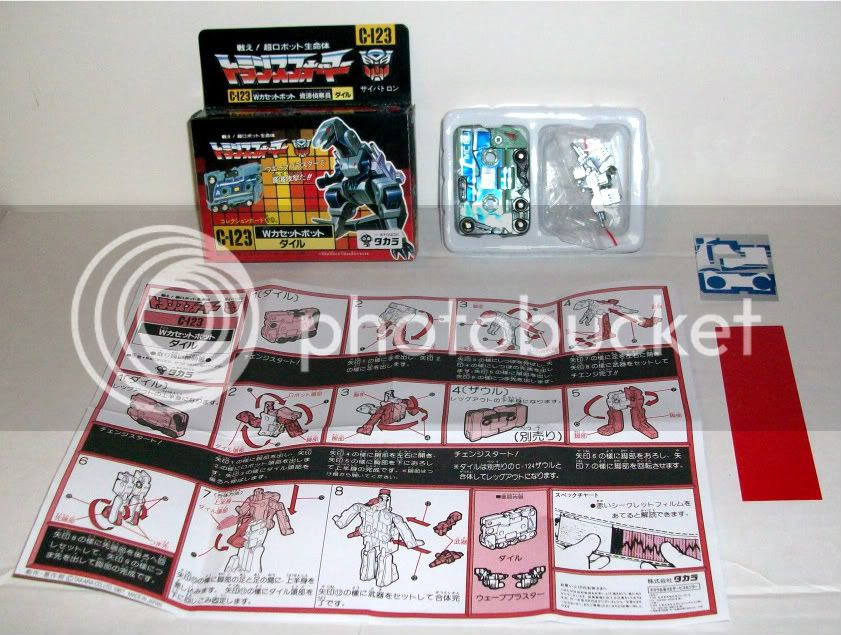 Inside the reissue version the cassette and weapons are presented in a plastic tray.  I'm guessing styrofoam was used in the original.  The decals are really nice and printed on a think paper (?) and adhere to the toy quite easily.  They do come pre-cut, but I still had to take a knife to some of them for some minor trimming.  The instructions appear to be well made as well.  I wasn't really expecting much from them - maybe even a photocopy so I was pleased to see the color sheet.  They also come with small tech spec style trading cards, but I had already filed them with my other Transformer cards and didn't feel like digging them out. 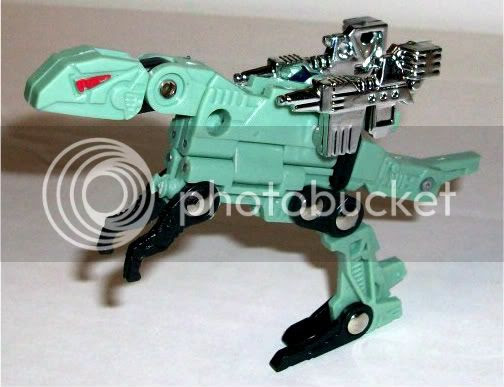 Going back to what I said about the box art earlier you can see how Dial looks almost anorexic.  Now I didn't expect him to have the heft that his box showed since I am at least familiar with the dino cassettes I do own (Overkill & Slugfest).  I had a little trouble getting Dial to balance on his own for the photograph, but after I got the legs positioned right he seemed to do OK.  Being a G1 toy there isn't a lot of articulation to speak of.  You can position his head, arms, legs and tail to some degree, but at the cost of his stability.  His chromed weapons are nice looking and fit snugly in the rear cassette holes.

Overall the dino mode is pretty good looking, but G1 Overkill is a much nicer figure.  I'd say part of the reason is his design didn't have to be compromised for the combining robot aspect.

Bio:
Strong in deep ocean waters, he can dive to depths of 1,500m.  His powerful tail can shatter tall buildings in a single blow.  Normally docile, despite having the greatest physical strength of the Cybertron cassette dinosaurs.  He has an unexpected affection for squirrels and little birds.  Makes use of standard cannons. 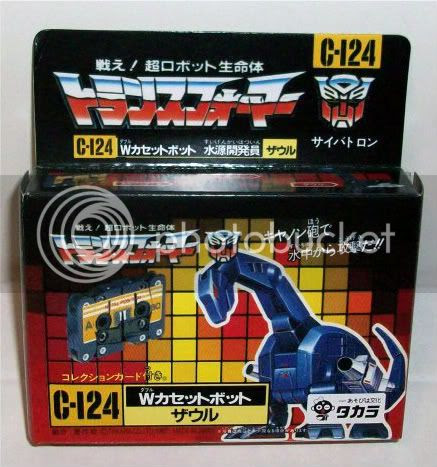 Zaur was also a part of the Headmasters line in Japan.  He transforms into some brontasaurus...or whatever the scientific community is calling them these days.  Again the box features some really nice artwork. The back of the box features an almost identical look to that of Dial's.  The quality of the box is very good overall.

Tech specs on the bottom of the box. 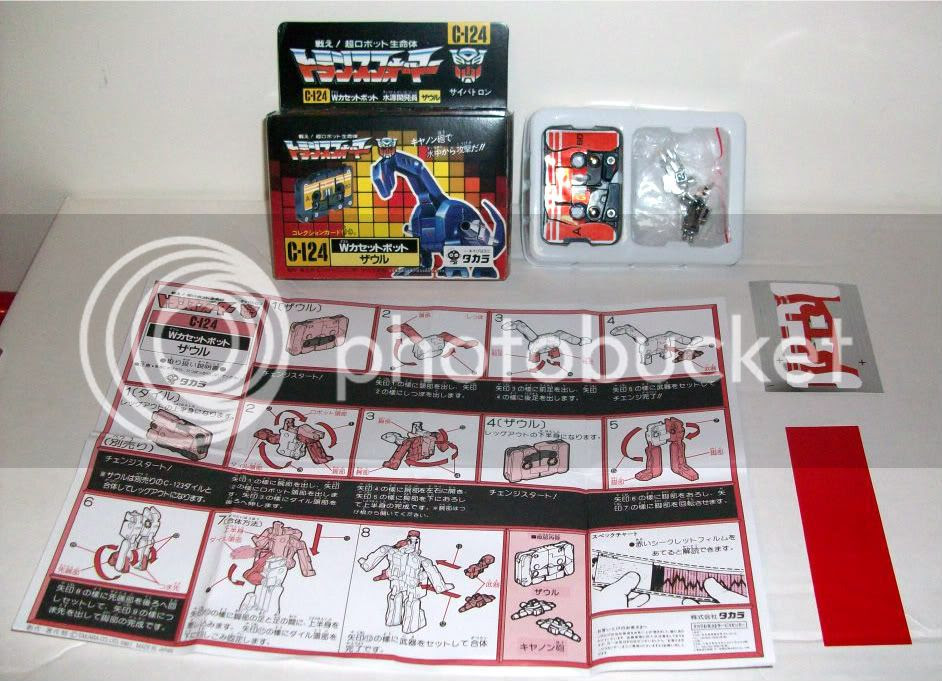 Zaur's stickers gave me a little more problems removing from the sheet and applying to the cassette.  I was able to get them off and applied where they looked rather good, but one sticker was slightly too large creating a small piece to overlay.  This small piece would protrude ever so slightly in dino mode.  It wasn't that noticeable so it doesn't bother me.  Being that this isn't the vintage toy I expected some discrepancies. Zaur's dinosaur mode is rather long which I like.  The midnight blue looks great with the black limbs.  Like Dial the chrome weapons are nicely done and fit in the rear cassette holes just fine.  The let down I had with this mode were hard to overlook.  First of all one of the legs falls off way to easily during transformation.  It pops on easy enough, but I shouldn't have to worry about this sort of thing.  The tail section was also extremely loose so it just sort of hangs there.  I couldn't get any sort of pose of the tail for the camera.  Zaur still has the better looking dinosaur form between the two despite these shortcomings.

When I say that the U.S. ended up with the better cassette combiners I don't think that I'm exaggerating.  Slamdance and Squawkbox are superior in every way.  You don't follow me?  Then just take a look at Dial and Zaur's combined mode, Legout. 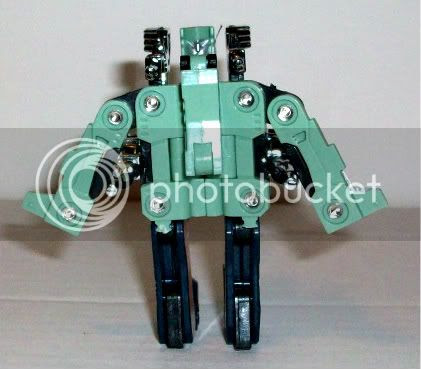 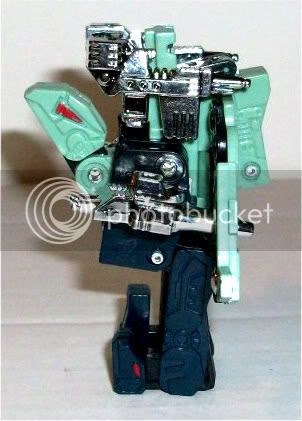 Where do I begin?  Legout's head is just odd.  While the face features a nice sculpt the head sits back too far on the upper body.  I do like how the guns are mounted on the shoulders and ride up on either side of the head.  If I positioned the other set of guns correctly on the sides then you'll see that it hinders the arms a little.  That isn't saying much as the arms just kind of hang there.  There is no real articulation to speak of in his mode.  My copy also had a hard time staying together.  I'm not sure of the vintage toys had the same problem or not, but Dial didn't want to fit snugly onto Zaur.

In closing these guys are a mixed bag.  On one hand I like them for what they are, but when I stop and think about the combined mode I just can't get excited.  As unofficial reissues they aren't bad.  They do suffer from some minor problems, but overall you're getting what you paid for - a pretty good toy.  I've often wondered though if these guys would be as popular as they are if more people had them.  Perhaps then they'll see that despite their rarity in the collector's market these toys just aren't all that fun.

I am planning on adding these two cassettes to my Toy Store in the side bar.  The reissue supply seems to have dried up as well so if you have been thinking about adding these two toys to your Transformers collection you better act sooner than later.  If you are a diehard G1 fan and want these toys without having to take out a 2nd mortgage on your house then these are suitable stand ins.  I'm not sure if these have driven the prices down of the originals, but that does seem to be the trend with a lot of these reissues.  Whatever you decide I hope you found this post informative or at least entertaining.
at 10:49 PM