The the popularity of all things Transformers one should not be surprised that everyone wants a piece of the pie.  Let's face it - both Takara/Tomy (of Japan) as well as Hasbro have a cash cow in the Transformers brand.  It's hard to believe the Transformers brand has been around for 25 years now and there is no denying it's growing popularity, especially with the 3rd live action movie coming this summer.

The whole third party companies slowly penetrated the Transformers scene over the years with small add-on sets for official licensed toys.  One of the first (and best companies IMO) that entered the third party market is FansProject.  Now they are known for their awesome City Commander, Protector armor add-on sets as well as the equally impressive Crossfire sets.  I'm not sure how I missed the release of their G3 trailer for Classics Optimus Prime / Henkei! Convoy, but now that I've held it in my hands I can say this is another fine addition to the FansProject line-up.  Lets just say there is definitely more to this trailer than meets the eye!

I would be doing this set a disfavor if I didn't take a few moments to talk about the packaging so we'll start there before opening up the box and taking a closer look at the trailer itself.

The front of the box is beautiful and made from a nice white card stock.  The colors are primarily a metallic silver and blue - the same colors of G1 Prime's trailer.  Just like the City Commander box this release too shares the Parallax name.  More on that later.  The name of the set, G3 Trailer is very prominent on the box.  Above the name is a nice large window showing off the majority of the trailer.  What I didn't first notice upon receiving this toy is the area to the left of the window.  This section is actually perforated allowing you to remove it if you wish.  Underneath this cardboard expands the window and allows you to show off Optimus Prime in truck mode attached to the trailer.  This is a very nice touch for collectors who like to display their items in the packaging.

As if the trailer itself wasn't cool enough FansProject also included several nice shiny chrome weapons that are all viewable on the top of the box.  There are 4 different guns in different sizes and one sword.  You can also see the new and improved Roller.  We'll look at these closer once the box is opened.

The bottom of the box has the story that FansProject has built around many of their releases.  I apologize that I didn't make this photo larger so you could read the paragraph.

On the back of the box you get a better idea of what is inside.  It shows off the various features of the trailer - repair bay (vertical position), stealth mode, repair bay 'bot, launching Roller and included weapons.

Slide the inner plastic tray out of the box and you'll see the area where you can insert your Optimus Prime figure.  The tray that houses Roller and the weapons is a separate tray that fits on top of the trailer's tray.

The cardstock insert also acts as a portfolio for the trailer's instruction & sticker sheets.  This is another nice touch as the pocket firmly holds these papers in place so they don't slide around inside the box. 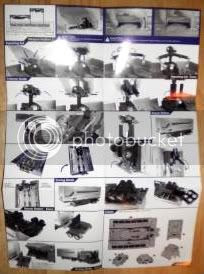 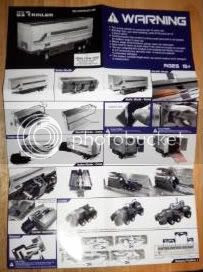 In past FansProject releases the instructions have been printed in the form of a comic book.  This time around it is a simple black and white sheet.  The instructions do a good job pointing out the various features. 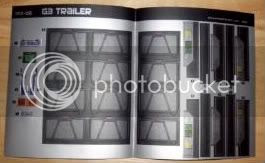 The sticker sheet seems fairly simple.  I didn't take a long look at the sticker placement map on the instructions, but I do plan on applying these at some point in the near future.  After all this toy will be proudly displayed on my Classics / Henkei! shelf.

The trailer is beautiful and an excellent upgraded homage to the original Generation One version.  The colors are spot on as is the over design.  Notice the small blank square on each side in the blue stripe?  Get yourself a set of reproduction Autobot symbols and you'll be all set! 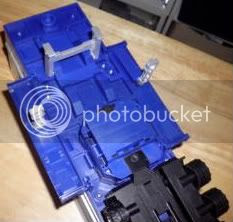 The original G1 trailer did have some support to hold the trailer up when Prime wasn't attached.  This version does as well, but better resembles a real world trailer's support.  The silver legs at the trailer's nose fold down as do the small silver support braces on each side. 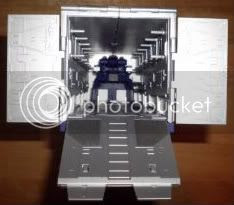 Open the back doors and fold down the ramp and a peak inside reveals the repair bot 'bot in the back.  This is where you can also insert and store Roller if you so wish. 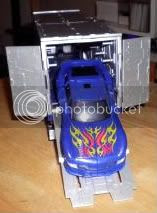 One of my favorite parts about the trailer is the ability to store one deluxe sized Transformer inside!  Here you can see the new Reveal the Shield version of Tracks fitting inside just fine.  I love how the doors open and the extending ramp.  I also tried Classics Sunstreaker, Prowl and Reveal the Shield Jazz and they too fit inside the trailer without any problems.

Owning several different versions of this Optimus mold I grabbed the first one I put my hands on...being the Hasbro version.  Whether you attach this version of Prime or Takara Tomy's Henkei! version you can't go wrong as both versions mesh very well with the trailer.  The trailer's wheels even share the same design as Prime's which again is a very nice small touch. 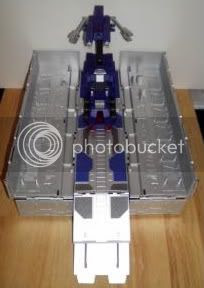 To transform the trailer into base mode / repair bay is very similar to before.  Separate the halves and fold down.  Open the rear doors and fold down the ramp.  The repair bay 'bot is basically the same as the original G1 version.  This one however replaces the fold up radar with another articulated claw arm.  The sides of the trailer before had small command consoles that were signed for the original Diaclone figures.  This time around there are rows of pegs molded into the trailer along with various mechanical details.  These pegs can be used to store the included weapons. 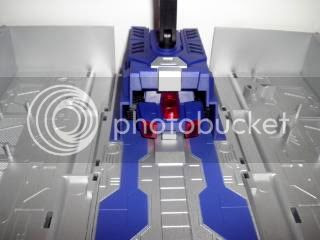 The upgraded Roller can fit into the base of the repair bot.  If you push Roller into the base far enough you'll hear a click.  Pull on the trailer hit underneath will cause Roller to be launched out.  I was surprised at the strength of the springs as I was able to launch Roller completely out of the trailer and down the ramp!

Roller is simple and yet I love the new look.  Both the head lights and cockpit are cast in the same red translucent plastic as the trailer's tail lights.  All 12 wheels are free rolling.  There is a hole on the back that allows you to insert a weapon of some sort.  I didn't try but I believe one of Prime's guns will fit in this peg hole. 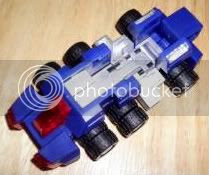 Roller himself also transforms...kind of.  Apparently there was a piece that was included with the repainted City Commander armor that fits down inside Roller allowing you to attach additional weapons.  To transform Roller simply extend the back end portion, fold back the blue block that has the peg hole and fold down the silver pieces on the side.  You now have a rectangular area to fit this module from the other armor set. 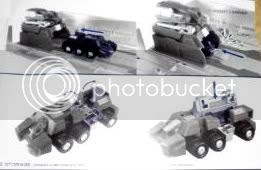 Here is a close up from the instructions regarding Roller's transformation. 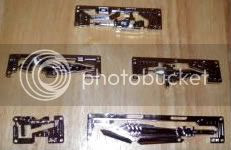 The included shiny chrome weapons come attached to little frames.  It is extremely difficult to remove these weapons as the material used is thick and hard to cut with scissors.  I basically had to saw them with my pocket knife until I had cut in enough to twist them off. 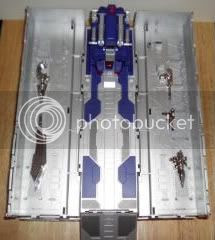 Each weapon has a hole somewhere on it that allows it to be attached to one of those pegs inside the trailer. 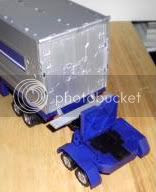 Another nice feature about this trailer is the additional set of wheels that are used to attach the City Commander armor or it's repainted version.  This assembly simply folds down from underneath the trailer and then rotates to the back.  Flip out the wheels and flip up the panel to reveal the trailer hitch.  You do have to lift up the rear bumper to deploy this rear trailer hitch assembly.  I only own the City Commander armor and it's attached to my Classics Ultra Magnus so I apologize for not being able to supply pictures of this armor attached to the trailer.

There is one other feature that I should mention - stealth mode.  I'm not sure I completely understand how this is supposed to work however.  I noticed the side and top panels of the trailed seemed a little thick.  You can flip down the top and sides to expose a mirror like covering that completely covers the whole trailer. 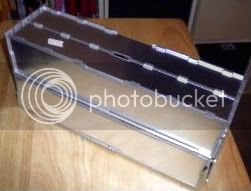 The mirror surface does have a protectant covering that you must peel off.  I'm leaving it intact as I just don't see the purpose of this mode.  How is a large rectangular mirror constitute as stealth?

I figured that this trailer would be a worthy purchase since it was released by FansProject, but I'll admit my expectations were rather low.  After all its only a simple trailer.  Doing this review however has blown me away.  I can't wait to finish reorganizing my Classics / Henkei! shelf so I can display this awesome trailer attached to one of my Prime figures.  This trailer was released a year or so ago and I'm not sure what the going price is anymore, but do yourself a favor and hunt down this toy.  Your Optimus Prime figure is naked without it!  Try TFSource for price & availability.
at 3:15 PM