Bio:
It's been a long time since Luke Cage went by the name Power Man, and a lot has changed. He's gone from being an independent operator, making money with his powers, to a leadership role in the Avengers. There was a time when his bulletproof skin and super strength made him impulsive and short-tempered, but his recent responsibilities force him to think of others first before he acts.

Ah yes, a new Marvel Universe figure to add to the collection FINALLY! I'm not sure what is wrong with Hasbro's distribution of this line, but finding new figures is harder than finding a virgin in college. Today we'll take a look at the new leader of Marvel's Thunderbolts, Luke Cage. 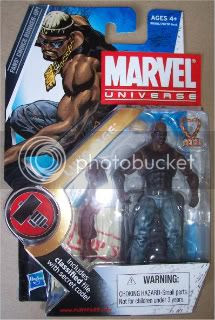 I gotta hand it to Marvel's graphic design team as they have hit a home run with the packaging of this line. As much as I enjoyed Frank Cho's art on Series 1's packaging Mike Deodato's artwork is just fantastic. The switch over from S.H.I.E.L.D. to H.A.M.M.E.R. is a nice touch as well...even though in comics this switch is outdated. You may notice Luke's packaging has been tweaked a little as he was the runner up in the Fan's Choice contest Marvel held online. 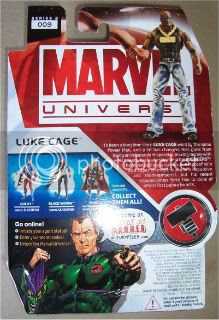 On the back of the blister card you can immediately tell the other transition from Series 1 to Series 2. Replacing Frank Cho's Nick Fury is now Deodato's Tommy Lee Jones look alike Norman Osborn! The bio does a good job giving you a quick summarized history of the character. It is still prompting the buyer to go to Furyfiles.com to enter the code that is included inside the packaging, but upon entering my code it doesn't appear to unlock any new content. Not sure if Hasbro is planning on updating the website to reflect these new changes in Series 2 or not. 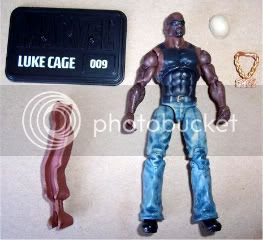 Here you have a good look at what is included inside the packaging. With Series 2 the figures now come with figure stands. This I like very much. In addition to Luke Cage himself you get a knit hat and his gold chain necklace I believe was made famous in his Marvel Comics MAX series. You also get a bent up girder he can wield. It's lame, but more on that later. The construction of the figure is really no different than with previous male characters in this line. My figure does seem really solid though with the joints holding most poses really well. There is a lot of articulation - head, shoulders, arms, elbows, wrists, waist, hips, knees and the feet to some degree. I like the washed look on the jeans, but the washed look was extended to the arms & head and it looks really odd. The brown plastic that is exposed in the center of the figure (neck area around the straps of his shirt) don't have this washed look and look so much better. There were only 2 figures in the store when I purchased mine and both had this same look. His shirt is simply painted onto the body which at first I thought looked somewhat odd, but after having the figure out of the packaging for a bit now it doesn't bother me at all. My only gripe with this figure is the stupid girder he comes with. I had a hard time fitting it into his hand so I can snap a few pictures first off. After I got the weapon in place it seemed to weaken the wrist joint since it's fairly long and somewhat heavy. Luke's other hand is a closed fist (which normally I hate), but seeing how Luke is a man from the streets of Harlem I guess it makes sense. 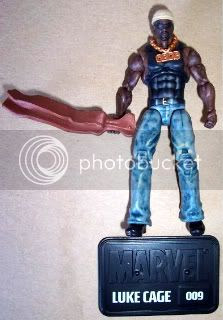 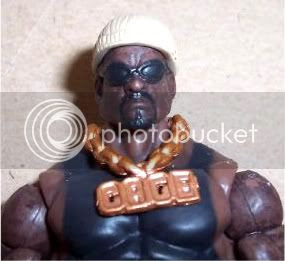 I like the overall look of the figure, especially the head. The black sunglasses and the gotee are perfect. I remember in the first several issues of the comic New Avengers David Finch drew Cage wearing the knitted styled hat. I could personally do with both the hat and the necklace, but they are nice additions for those who may enjoy them. 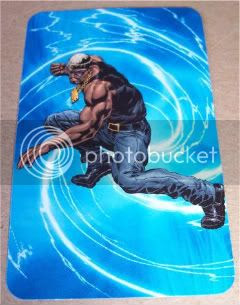 I'm a sucker for trading cards so I love how Series 2 continued the inclusion of the Superhuman Registration Act cards. On the front side we get a full body shot of Deodato's artwork used on the front of the packaging. The back side of the cards is very nicely laid out. You see his real name is Luke Cage, legally changed from Carl Lucas. In the bottom right corner you have a classification for each character, with Luke being a Enhanced Human. 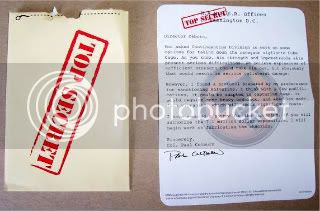 As with Series 1 you still get a Top Secret case file only this time the "letters" are addressed to Norman Osborne.

You asked Contingencies Division to work on some options for taking down the renegade vigilante Luke Cage. As you know, his strength and impenetrable skin present serious difficulties. We believe explosives of sufficient strength could take him out, but obviously that would result in serious collateral damage.

However, I found a protocol prepared by my predecessor for sanctioning Wolverine. I think with a few modifications, it could be adapted to capturing Cage. It would require some heavy ordnance, and shackles made from Vibranium, which will incur significant costs.

I have secured a source for the Vibranium. If you will authorize the 7.1 million dollar expenditure, I will begin work on fabricating the shackles.

This is one of my favorite Marvel Universe figures to date. I was thrilled to find it at the local Heroes Convention a few weeks back, but I'm glad I resisted paying the inflated price and waited to find him at retail. The other figure in this wave I'm really looking forward to getting my hands on is Thor as he is massive - even when compared to the bulked up Cage. If you are a fan on this line of action figures or just a fan of Luke Cage then do yourself a favor and pick him up the first time you run across him. I don't believe you'll have any regrets.