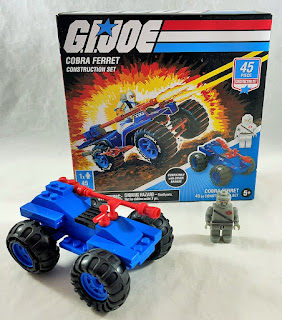 Oh boy, here we go again. Today we take a look at another GI Joe building set by Forever Clever. When I first saw things showing up at various bargain stores around me I was excited. I like building sets (LEGO, Mega Blox, etc.) and I'm a fan of GI Joe so what could go wrong? Well, everything. I should have learned my lesson with the first set I reviewed, but I didn't.

This set contains 45 pieces and comes packaged with a Storm Shadow mini figure...however is it really Storm Shadow? I thought it was Firefly as the figure is gray, but it's labeled as Storm Shadow and he's also on the box art. The cardboard used for the box is very thin and cheap, I've seen plenty of these sets in stores that had their packaging trashed or punctured. 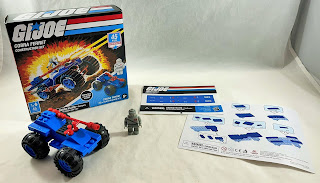 In addition to the Storm Shadow mini figure, the package contains a instruction sheet and sticker sheet. The set is rather easy to build, but if you plan on apply the stickers you can forget about that. They are printed on a very thin paper and the adhesive isn't sticky. You also run the risk of the set literally falling apart in your hands if you apply too much pressure trying to apply stickers. If you thought Hasbro's old Built To Rule (BTR) sets were bad, these take the cake. 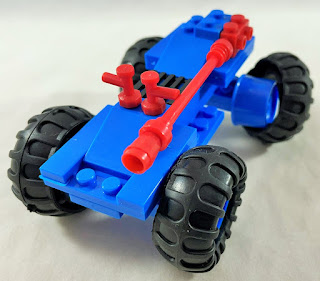 One of the rubber tires had so much extra plastic that the wheel couldn't even properly fit. Most of these sets too don't even accommodate the included figure. There is a "seat" on the Ferret, however it has those grid type pieces over the brick pegs so the figure can sit or stand. The design of the actual Ferret isn't wholly bad, it's just bad execution.

If there is any redeeming quality of these sets it's the mini figures. They aren't quite LEGO quality, but they aren't bad. The heads have a small nub for a nose and the back of the legs are a little hollow. Paint apps are done pretty cleanly. I ended up keeping this figure and tossing the actual Ferret in the trash.
Since I picked up the initial batch of sets, I've seen some of the newer sets such as the Mean Dog and Tomahawk. I have to admit I did pause for a brief second to consider buying them, then I came to my senses and moved on. Even the figures aren't enough of a reason to buy these horrible sets. Buyer beware!
at 9:47 PM