When it was first revealed that a animated What If...? series was coming to Disney+ I was excited. I thought this type of series would be the perfect fit for an animated series since these type of stories are usually short and self contained. I wondered if they would tackle some of the classic stories from the comics or do something else. Would be somewhat cannon within the MCU? After months of waiting the series hit the streaming service and I thought it didn't disappoint. While I've still yet to finish the series, the first few episodes were fantastic...including today's subject material. 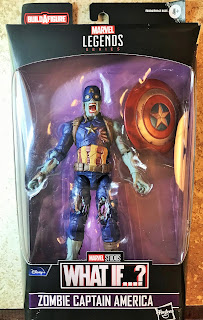 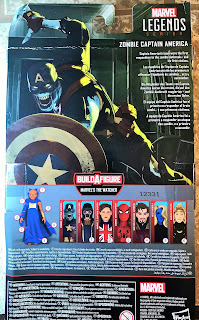 Hasbro's What If...? Marvel Legends series is comprised of 7 figures, 6 of which contain a Build-a-Figure part for Uatu the Watcher. Zombie Captain America is the one figure in this wave that doesn't come with this extra part or really any extra accessories...however the figure is worth every penny of the new $22.99 MSRP. 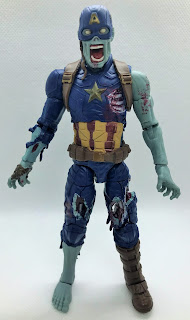 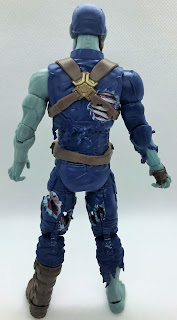 Straight out of the package you can immediately see all the gory detail oozing out of this figure. This thing is so freaking amazing. The detail sculpted into this figure is accentuated by the stellar paint apps. From the torn costume to the exposed ribs, blood splattered arm and exposed bones in the legs...this figure is horrifyingly beautiful. 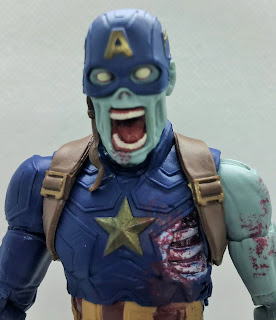 A figure like this is only as good as it's head sculpt...and well this one is pretty good. I love the pupil-less eyes, the slightly sunken in nose and overall the expression show on the face. The little bit of splattered blood below the lower lip and on the chin is the icing on the cake!

You'll notice that the left side of his chest has some gruesomely exposed ribs. This carries over to the rear of the figure as well. Part of his bandolier that holds his shield on his back is also ripped (or is it bitten?) over the exposed ribs. Look carefully below that and you'll see the lower part of his uniform is tattered and ripped as well. 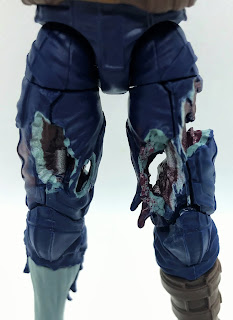 When I saw the detail sculpted in the legs I immediately thought back to the Zombie Viper from the 30th Anniversary G.I. Joe series. The exposed flesh and bone itself is pretty wicked, but the fact that you can clear see through the leg is next level.
I haven't had this much fun with a Marvel Legends figure in a long time. Hasbro I feel as really stepped up their game lately as I've seen a lot of great figures on the retail pegs. It has been really hard resisting getting back into collecting Marvel Legends, but when I saw this figure solicited I knew it would be a instant purchase if I happened to find it locally. Thanks to a Walmart out of town that I visited while on a work trip, Zombie Cap has become a prized collection and centerpiece of my collection. 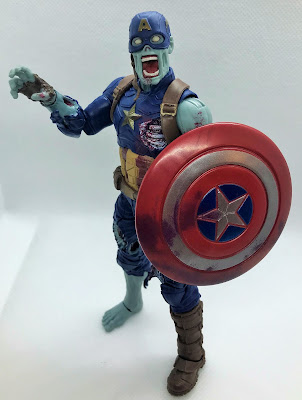 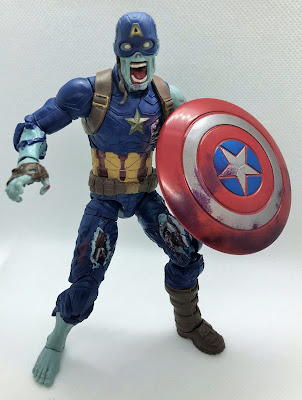 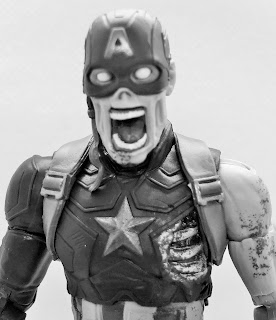 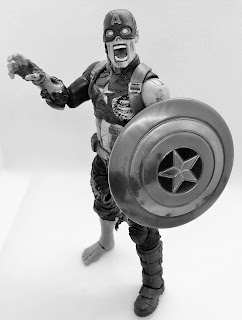 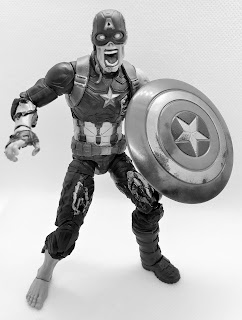 I thought these photos in black & white looked pretty cool and is my little nod to the godfather of the zombie genre, the late George A. Romero
at 9:42 PM