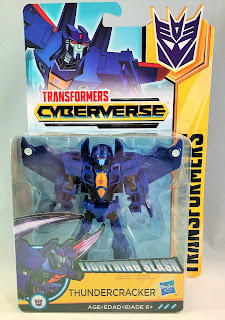 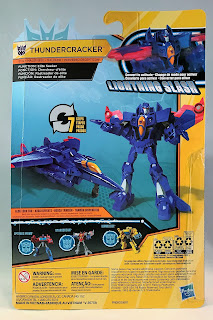 While the Transformers Cyberverse series may not be my favorite line, I have found myself purchasing more of it than I originally thought I would partially due to the selection of characters and lower price point. I'm a sucker for the Thundercracker character so this was an easy purchase for me. Finding it at a local Ollie's discount store for $5 was the icing on the cake. 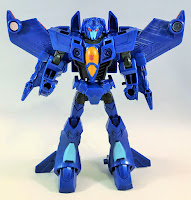 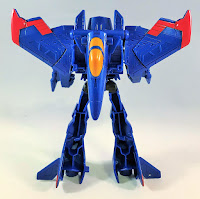 Thundercracker is part of the Warrior class of toys...basically a deluxe. It's the same mold as the original Starscream as well as the Acid Storm figure. As far as I can tell there are no changes made to the mold for this release. That said if you didn't like those toys, then I don't think you'll care for Thundercracker.
The mold itself isn't that bad. While we have seen better versions of the classic Decepticon seekers, this mold looks OK. Yes, it's a simple design with a simple transformation. Yes, there are parts of the toy that are hollow. What hinders this mold however in my opinion is the action feature. Dubbed "Lightning Slash", the top half of the body can spin around in a full 360 motion. This makes it hard at times to line up the torso straight as the top wants to drift to the left or right at times. 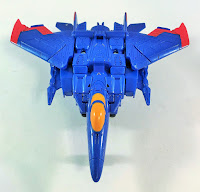 My only dislike of the vehicle mode are the tiny rear vertical fins. They are there, but they are so small that it's easy to miss them. This to me throws off the look of the jet mode a little. I'm fine with the colors used. Some may not like the brighter shade of blue, but if you've been buying Transformers for a while then you'll know that Thundercracker has been just about every hue of blue over the years. 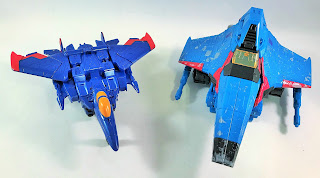 If I weren't a Thundercracker completionist this would have been an easy pass, especially since there are so many better versions of the character out there. The Siege toy was a pain in the butt to transform, but is the far superior toy...then again the market these two toys are aimed at are not one in the same.
at 11:56 AM