Masters of the WWE Universe: Sting

I had to admit that I was skeptical when I heard the idea of Mattel crossing over Masters of the Universe with WWE. While I'm not the biggest MOTU fan, I have bought several toys in the past. I'm also a WWE fan and while I don't really buy wrestling figures, I have liked the changes Mattel has made over the years. Once I heard they were going to be Walmart exclusives I knew my chances of finding them on local retail shelves was going to be a tough task. Originally I could only find Triple H and Fin Balor, but the figure in the first wave that I wanted the most was Sting. When I finally found one, the blister card was bent and curled...but I didn't let that stop me from buying it. 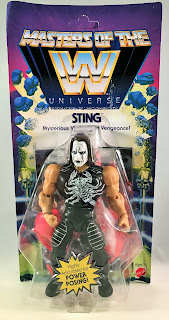 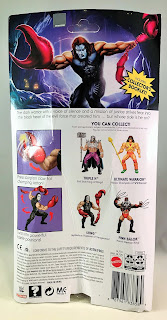 The packaging is a nice combination of the two brand, including the logo. Mattel made a backstory which is told via a small comic that is included with each figure with everything taking place in WWEternia. Corny? Clever? You be the judge. 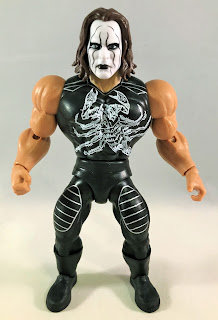 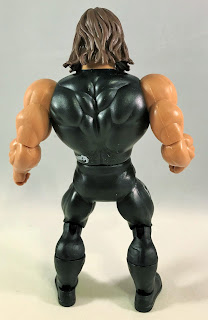 These new figures are based of the new, upcoming Masters of the Universe Origins line. These molds look closer to the original 80's figures, but with increased articulation. The heads and hands are detachable so theoretically you could build your own original character by swapping parts if you so choose. The figures themselves stand about 5 1/2 inches tall and are full articulated.
Sting is done in his classic "Crow" look from his days in WCW, prior to his appearance in WWE. While the upper body may be a little larger than the character it's based on, Sting's face looks fantastic and captures look of Steve Borden, the man behind the Sting character. 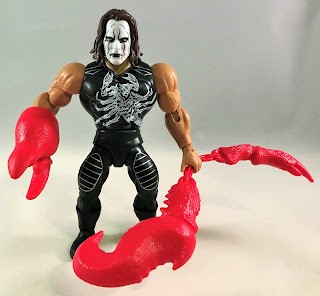 Sting is based on the classic Masters of the Universe villain, Clawful. He was always one of my favorite villains so I was happy with this mishmash. Sting comes with a removable claw and some stoy of claw nunchuck. I don't care too much for this weapon as it's large, heavy and hard for the figure to wield. It took me several chances to even get this photo as the figure wanted to keep falling over with this heavy weapon in his hands. 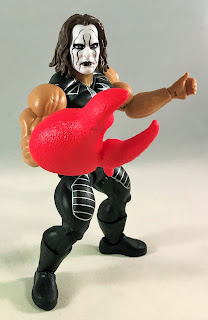 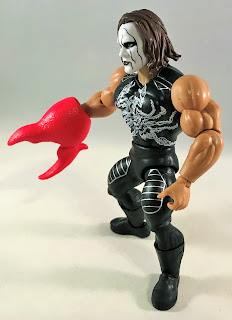 The actual claw that slips over his closed fist is pretty cool. I don't have an original Clawful figure to compare the size of the two claws, but it appears to be scaled well with the figure. The claw is articulated, allowing the bottom pincher to open and close. 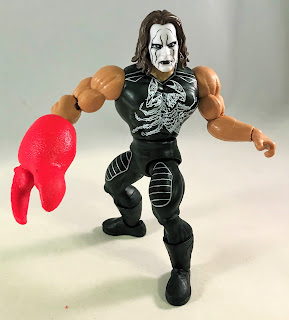 The upper body will spin if you twist the upper torso. Action features were once common place in figures like this so while it's not my cup of tea, it's still a nice throw back feature. Thankfully though it doesn't take away too much from the figure itself.
While I'm not planning on going all in on this line, this is a fun novelty if nothing else...especially if you are already a fan of both brands. As of this post, wave 2 is already on store shelves with at least two more waves planned. I look forward to what else Mattel has up their sleeves while I wait for the MOTU Origins line to be released.
at 4:56 PM

Email ThisBlogThis!Share to TwitterShare to FacebookShare to Pinterest
Labels: Masters of the Universe, Sting, Walmart, WWE