The 3rd party scene has gotten really crowded over the last few years and it has left me at knowing what to do. I've grown tired of buying a figure, only for some other company to come later and release a figure of the same character, only better. Combine that with being at a crossroads of sorts of what to collect and it's left me with buying very few 3rd party figures.

I've really grown to appreciate the Masterpiece series of figures from Takara Tomy and have purchased just about every release to date. With their popularity comes MP scaled 3rd party figures. While I believe that Takara Tomy will eventually produce an official Masterpiece figure of just about every Transformer from the 1984 and 1985, there are times my impatience gets the best of me. That's were MakeToys' new RE:Master series of figures comes into play; specifically Wrestle.

Wrestle marks the second MakeToys RE:Master series figure I've bought, but the first I've opened (sorry Cupola!). When it was announced that they were making Inferno (Hellfire) and Grapple (Wrestle) I knew I wanted to at least buy their take on Grapple. After all Grapple has always been one of my favorite early G1 Autobots.

The packaging is very nice. The box has a matte finish and the RE:Master logo is done up in a silver foil. Wrestle comes packaged in robot mode so the box is a good size, larger than most of the official Autobot Masterpiece releases.

Wrestle is currently a MakeToys website exclusive and can only be obtained via their website. I'm not sure what the reasoning is behind this move, but it explains why I was having a hard time finding the pre-order back around Christmas at the normal online stores I shop at.

The first thing that I found once I opened up the box was a set of replacement pieces for Gun Dog, their version of Hound from their Re;Master series. I'm not sure if there was some sort of issue with Gun Dog, but I'm guessing since two heads, faces and eyes were packaged w/ Wrestle MakeToys was trying to correct something. On a side note I'm not sure if the Mitsubishi license will ever come back to Takara Tomy so an official Masterpiece Hound may or may not ever happen. If the the latter is the case then at least I know what 3rd party version of Hound I'll be purchasing.

I was surprised at the general heft of the figure upon pulling the plastic tray out of the form fitting box. Grapple was always bigger than most of the Autobot cars so I expected this figure to be a good size. Right out of the box I was impressed with the overall look of the figure. He looks a lot like his G1 self, minus the cartoon accurate head.

Speaking of the head, I do wish he came packaged with a black toy accurate head, but it really doesn't bother me as much as I thought it would. What is included w/ Wrestle is another set of 5 faces with difference expressions along with metallic blue eyes. I tried to change one of faces after I wrapped up the photography and I found it rather easy to do so. No tools are required!

The face that comes on the figure isn't that bad, but I prefer one of the other included faces.

Wrestle's other included accessories are a black rifle and a silver missile. Wrestle has articulated hands that easily grasp the rifle's handle. To attach the missile you simply open up the forearm cavity and rotate the fist back. Doing this exposes a hole for the missile to plug into. Unlike the G1 toy, the missile does not launch from his arm.

Transforming Wrestle into his crane truck form is rather easy. I've heard the included instructions weren't much help, but I found the steps easy to follow. There were times during the transformation I felt like I was transforming G1 Grapple.

The crane truck is beautiful. MakeToys did a great job at capturing the the look and feel of the original G1 toy. I kept going back and forth on that transformation step to see if I was doing something wrong, but I couldn't quite figure out why two side panels weren't lining up correctly.

In a surprising move Wrestle's weapons were made to integrate into the vehicle mode. Above you can see that his rifle fits just under the crane arm. The missile actually can separate into two pieces and simply plug into a small area between his black knee pads. I was in a hurry the day I was photographing the toy so I didn't bother plugging the missile in. I knew I'd be displaying him in robot mode w/ the missile attached anyhow.

" Move over Hook, let a real 'bot handle this job "

The quality of this figure really impressed me. The shade of "construction yellow" looks great in hand. the plastic quality is top notch and the paint apps are spot on. Wrestle's wheels are in deed rubber and roll across a hard, smooth surface just fine.

I may not have had another Masterpiece toy readily available when I snapped the pictures, however why not compare the new with the old? In my opinion MakeToys did a terrific job with both modes. I wonder if we'll get a green Hauler version some day? 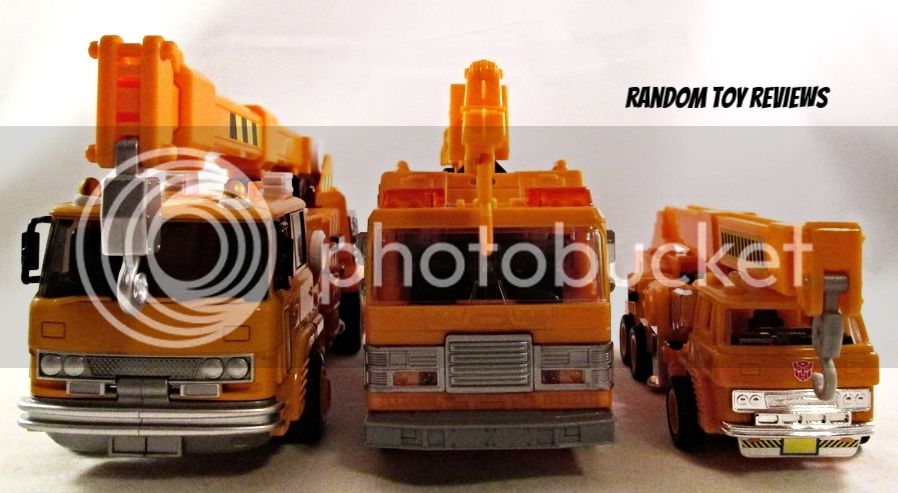 In closing I'm very happy with my purchase of Wrestle. It's not a perfect figure, but it's pretty darn close. Both Mastermind Creatures and X-Transbots are coming out with their own masterpiece scaled versions of the character later in 2016, so if MakeToys' asthetics aren't for you then you'll have a few different choices soon.

I'm sure that Takara Tomy will eventually release their own version of Grapple and when/if they do I'll pick up it. Grapple, Smokescreen and Sunstreaker are those characters that I'll buy multiples of - assuming they each get the official and 3rd party masterpiece treatment.

Wrestle is currently available for $124.99 exclusively at MakeToys' online store so if you think this may be the version for you I wouldn't wait too long to pick him up as their past website exclusives have sold out not long after their release.
at 4:29 PM