Hasbro has been releasing movie themed releases of their popular Marvel Legends brand around Marvel's movies. When Captain America: Winter Soldier was released to theatres nationwide, Hasbro released a new Captain America themed assortment of figures. While I've shared many of these, the Agents of Hydra figures just kept getting buried in the workload of photos I have to edit. 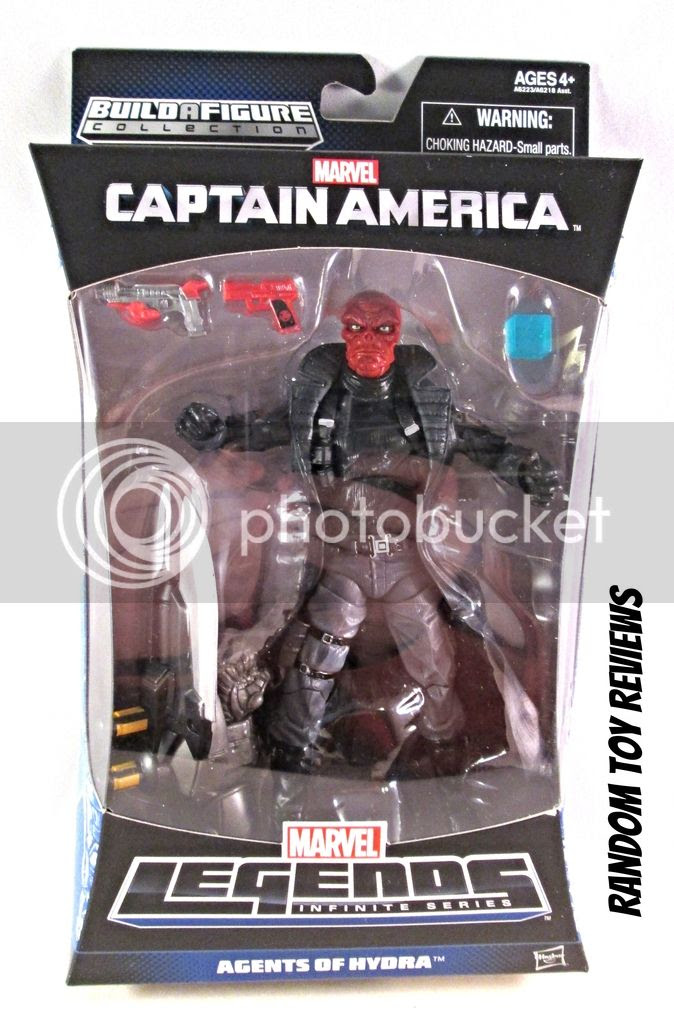 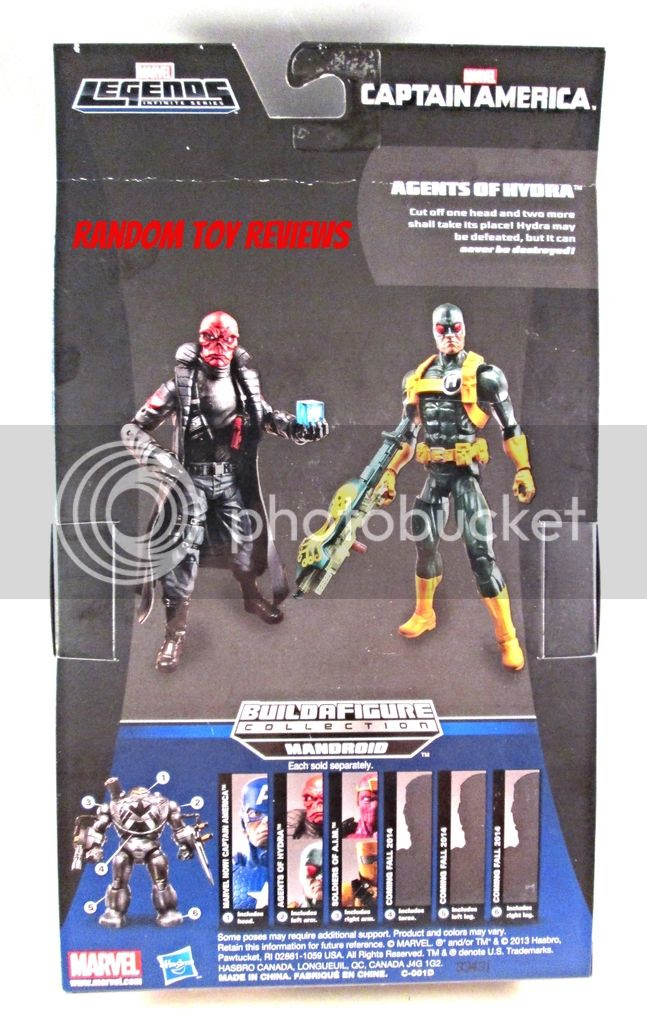 Just like the Soldiers of A.I.M., two characters share the title Agents of Hydra. The Red Skull and a basic Hydra soldier/grunt. The packaging is virtually the same for both figures, which is good since I forgot to take a packaged picture of the Hydra solder.

As much as I love the Marvel movies, I'm glad that they are mixing in comic versions of a lot of these characters. The Red Skull in particular looks fantastic and was one of the figures I eagerly awaited when this wave was first revealed. 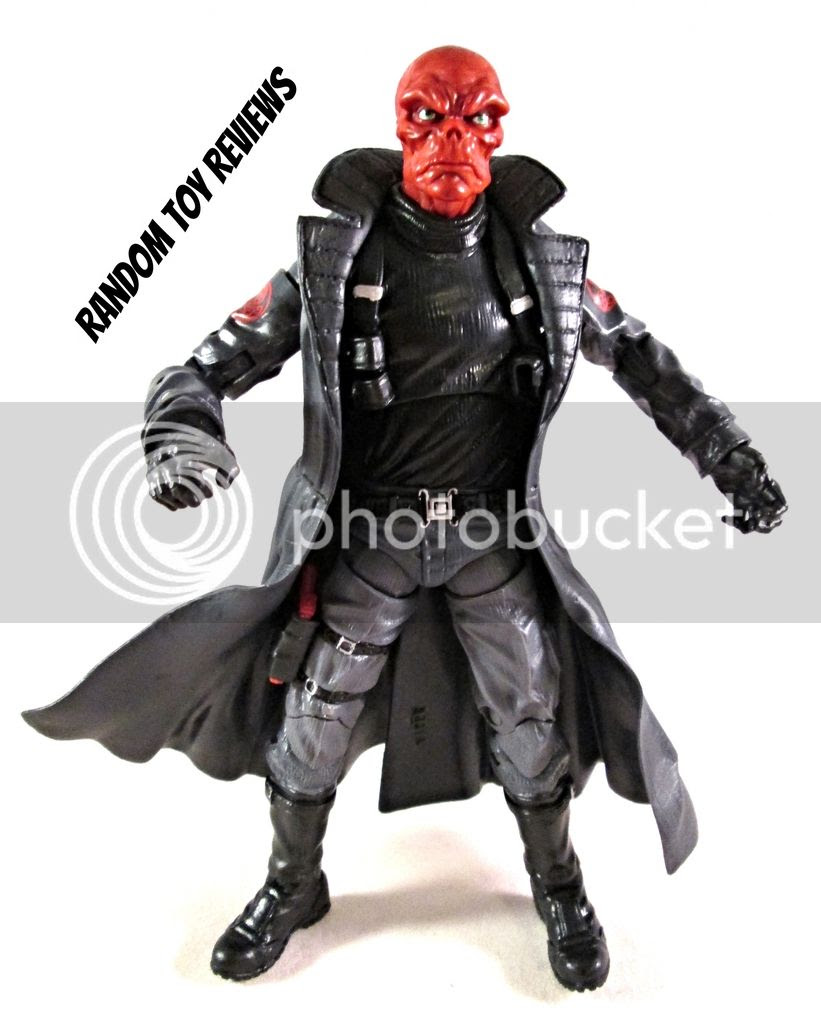 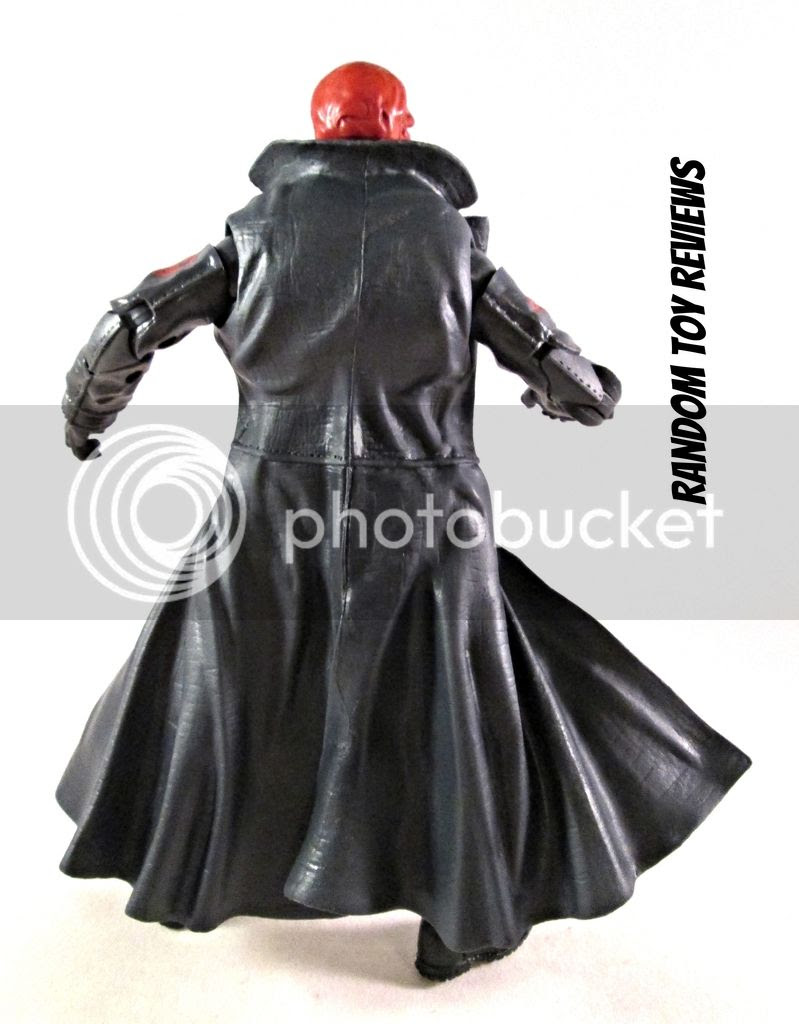 This version of the Red Skull is a good mixture of the classic comic and the movie version. He shares the same trench coat as the Punisher and Blade from a previous wave of Marvel Legends figures. While I like the flowing look of the trench coat, I could have done without it...or at least a non-flowing version. His coat does restrict some of the figure's articulation. It's a sleeveless coat essentially and can be removed, but I didn't bother for the photo shoot. On his right leg is a gun holster which can hold the small pistol he comes with. 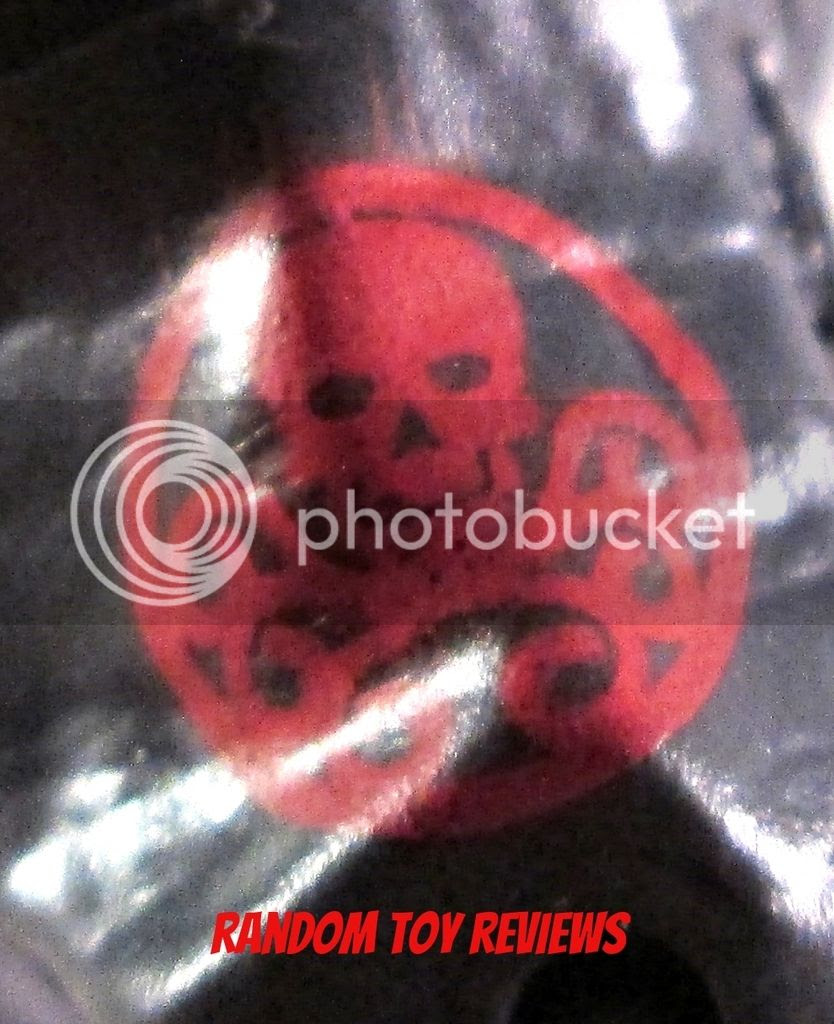 The Skull's outfit wouldn't be complete without an Hydra emblem somewhere. This red emblem can be found on the side of his arm. 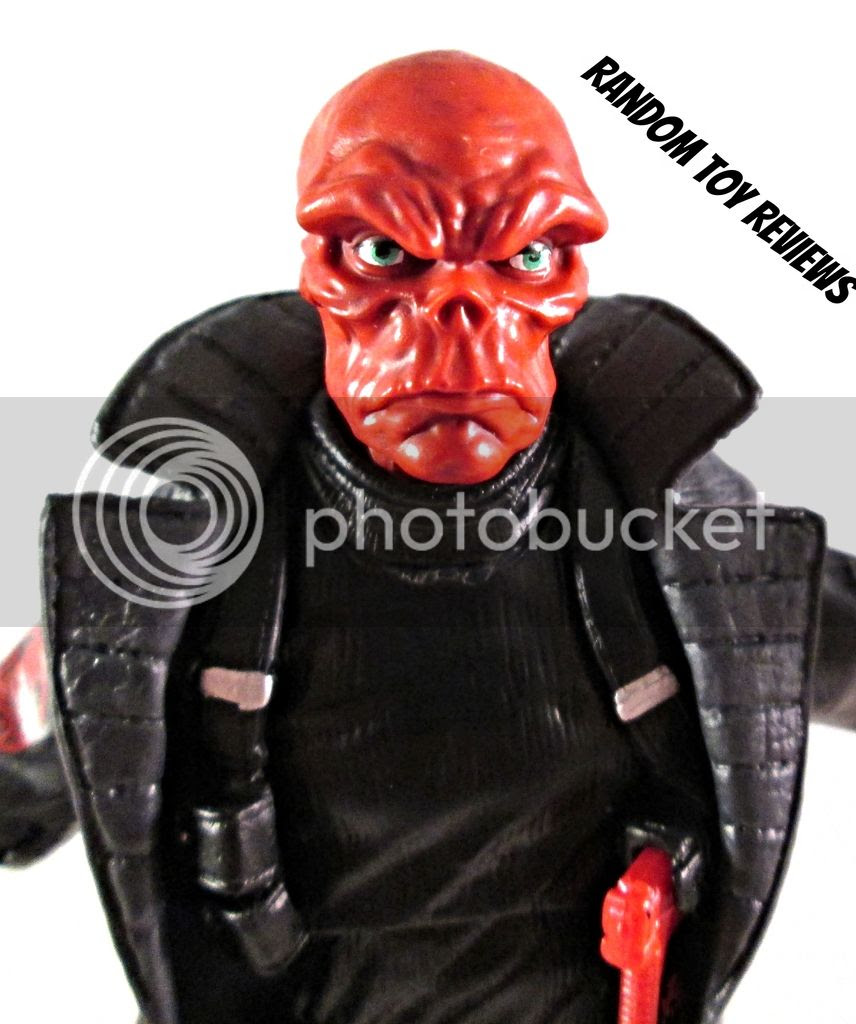 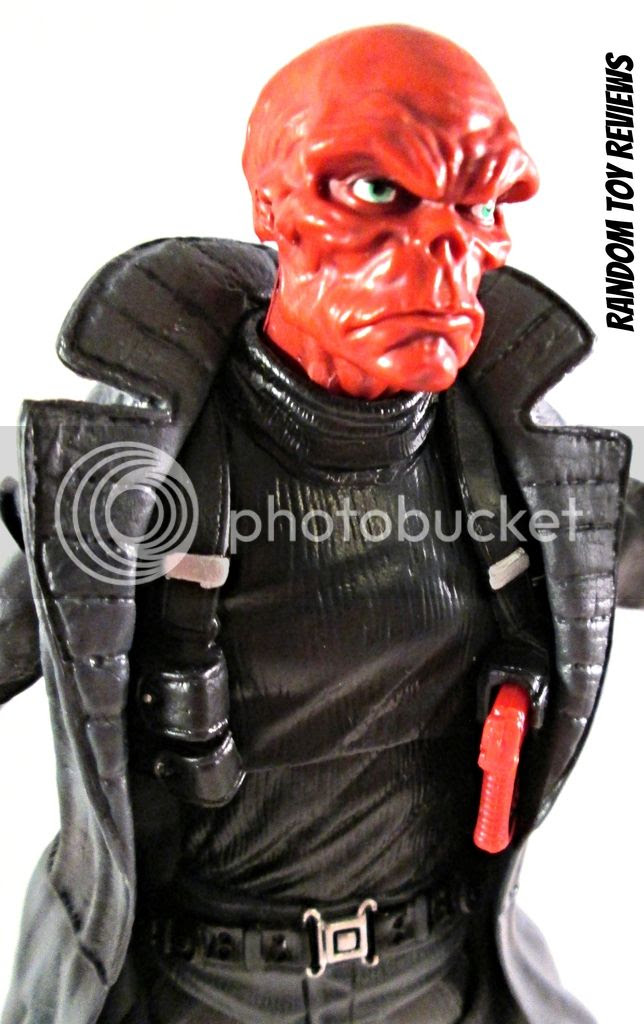 The head sculpt is gorgeous and one of the best features of this figure. The intricate detail is great and even the paint applications are done well. On his chest he has bandolier that is made of a soft plastic. There is a holster that can hold the small red pistol he comes with. 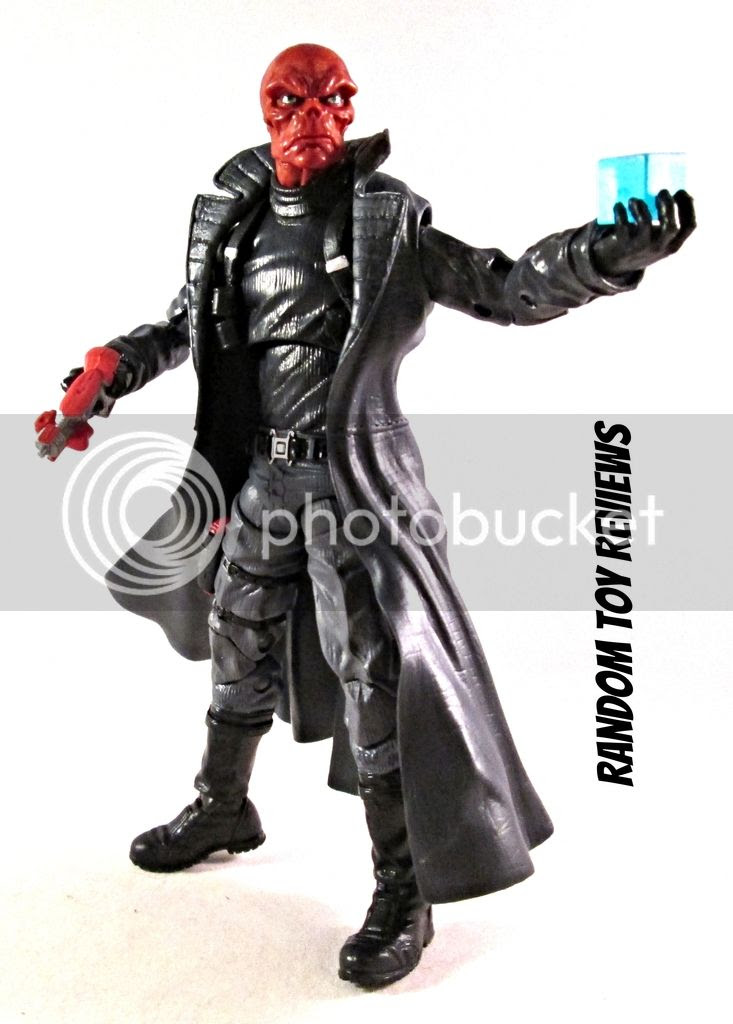 The other included accessory the Red Skull comes packaged with is none other than the Cosmic Cube! Instead of trying to accurately describe what the cube is, let me let the Marvel Wikiapedia do the work for me:

The Cosmic Cube is an item that controls matter and energy, answering to the will of the sentient beings that use them. They require practice to be used properly, but a skillful user can alter all reality to answer to it's thought, granting anything they desire. 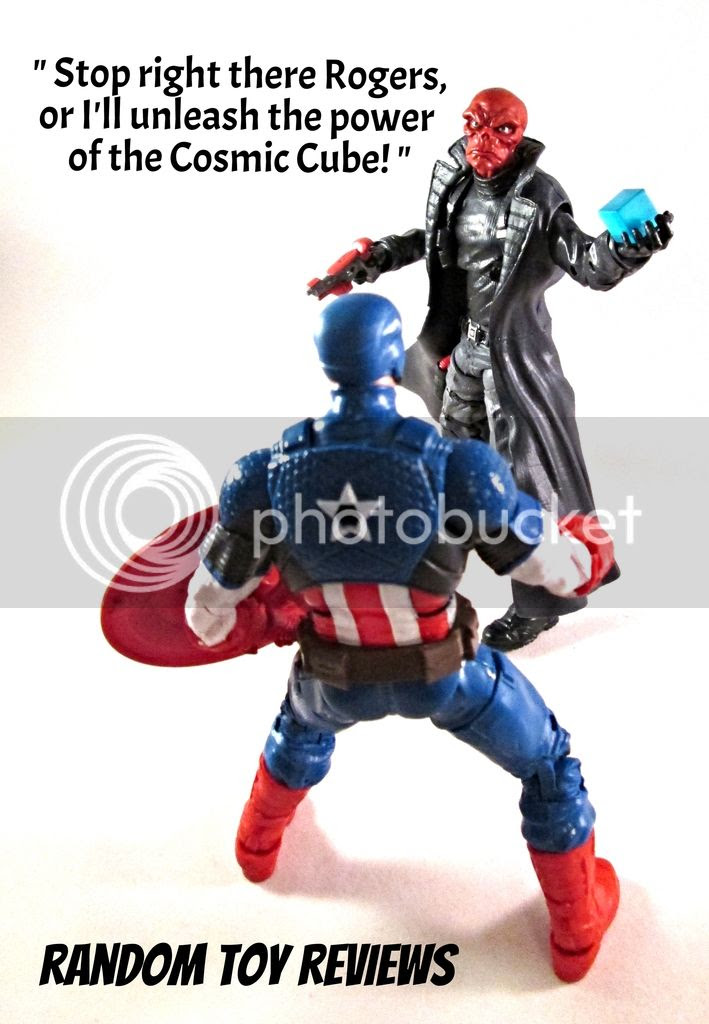 The Cube is made of a soft plastic and has a hint of glitter mixed in. It fits perfectly inside the Skull's left hand. This is one of the better non-weapon accessories I've seen packaged with a Marvel Legends figure in some time. 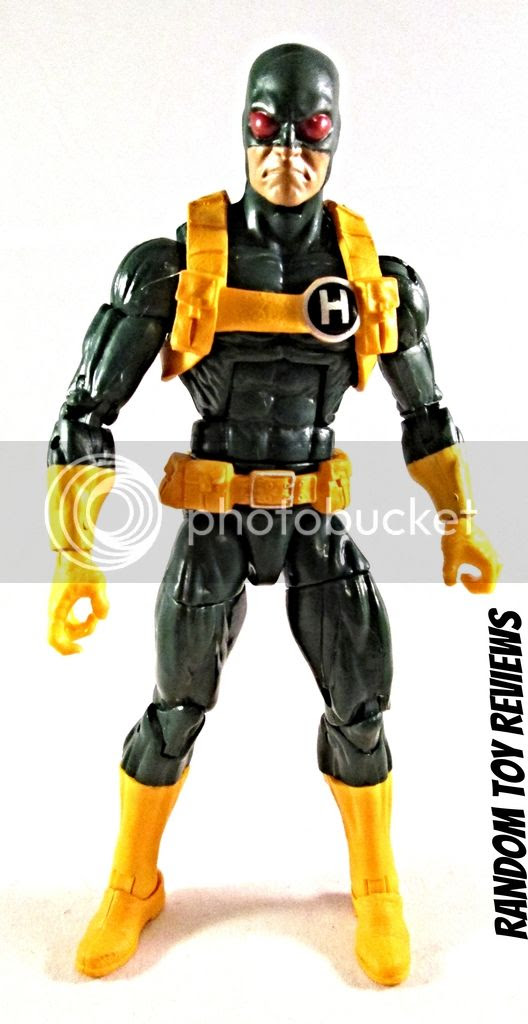 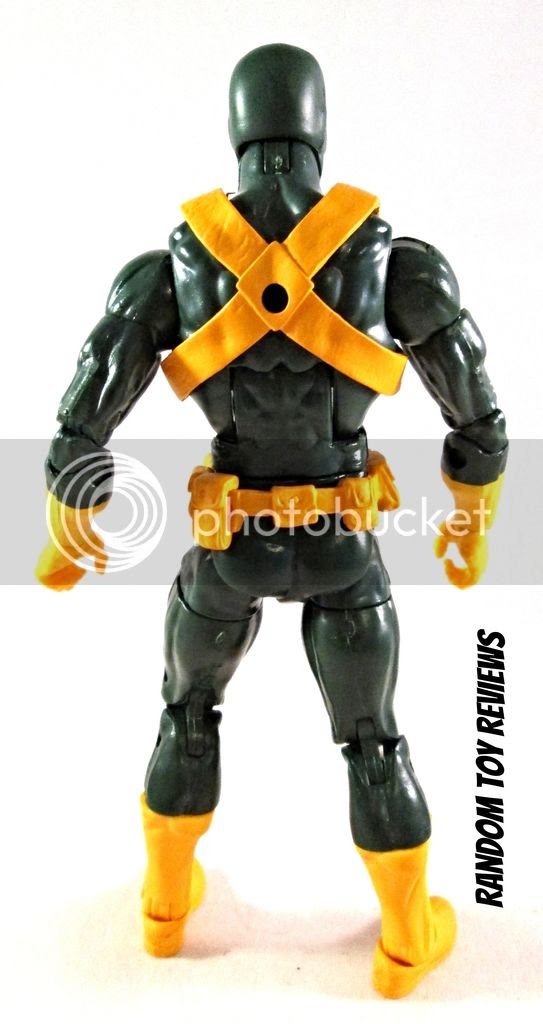 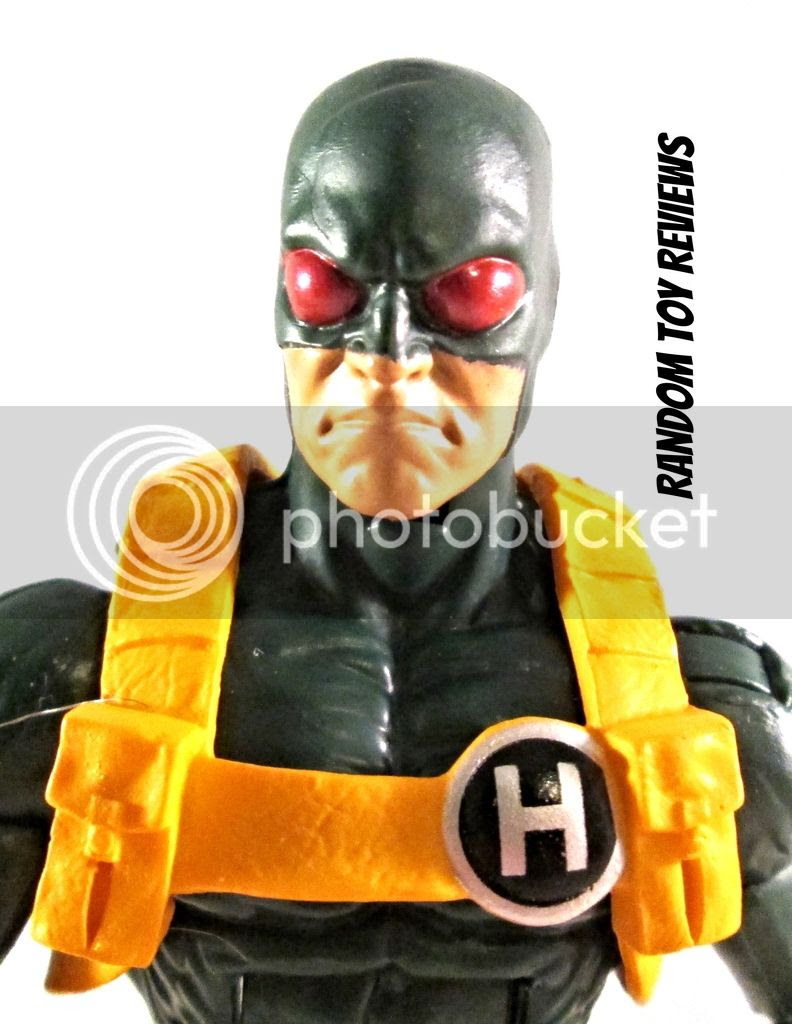 The Hydra soldier is pretty basic. It features the classic olive green costume accented by the yellow bandolier, belt, gloves and boots. Even the iconic bug eyed red eyes are featured on the costume's cowl. I like the figure, but I think the A.I.M. soldier comes in a little higher. Initially I found this figure fairly hard to find in my area, before eventually becoming a little easier to find. I'm not sure of Marvel collectors troop build generic characters / soldiers such as this, but at $20 a figure I'm OK just having one. 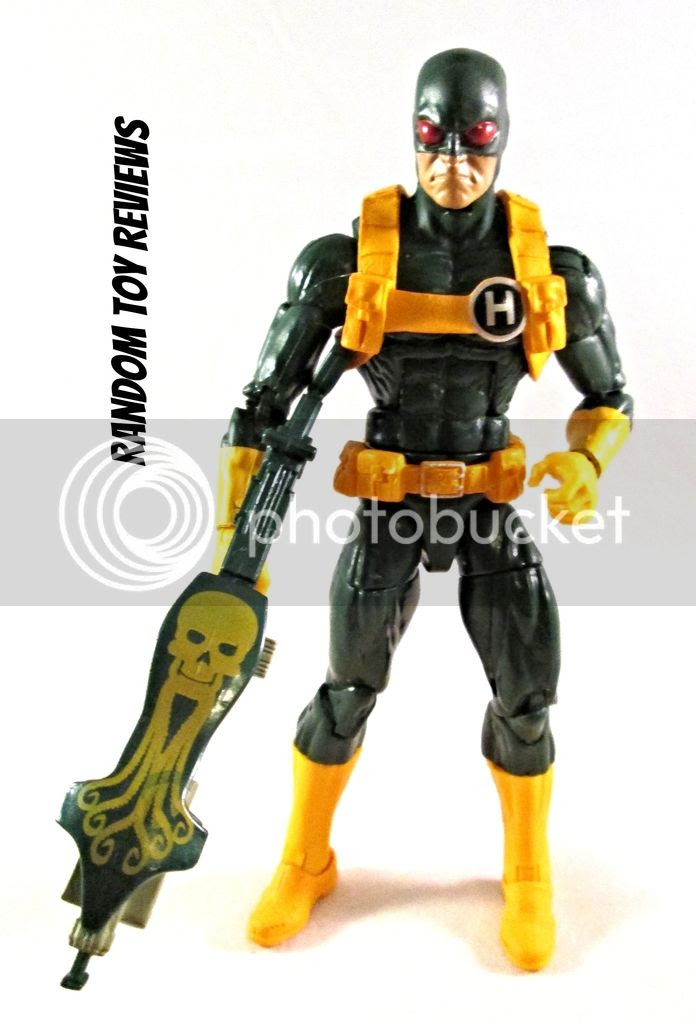 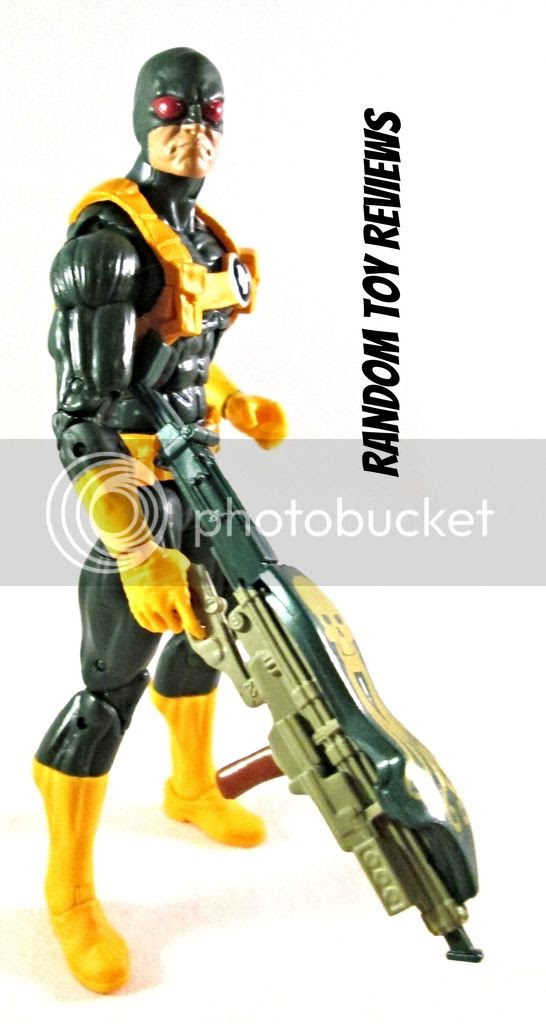 The Hydra soldier comes packaged with two weapons. The first is this assault rifle looking weapon. It's an interesting looking weapon as is, but on top is the familiar Hydra emblem, only with it's tentacles down. Not sure I've seen that look before. 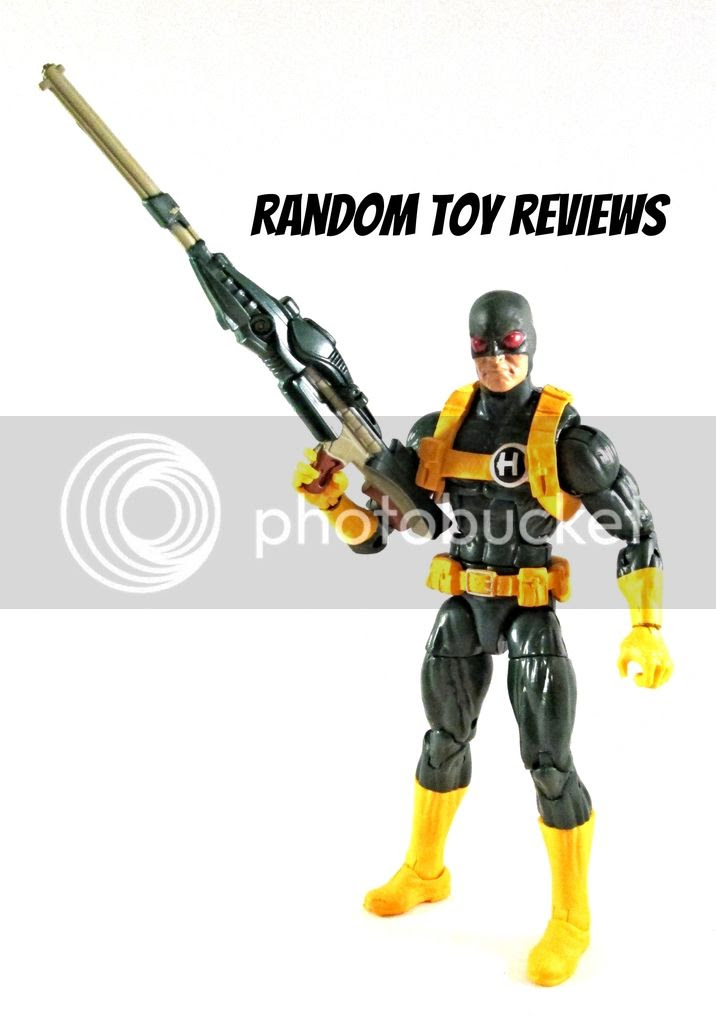 The other included weapon is more of a traditional sniper rifle. Both of this weapons are rather large, making it hard for me to pull off many action poses. Speaking of poses, the articulation is your standard Marvel Legends fare.

The Agents of Hydra figures are quite nice and make an excellent addition to any Marvel Legends collection. It's always nice to get more villain characters, especially someone as iconic as the Red Skull. 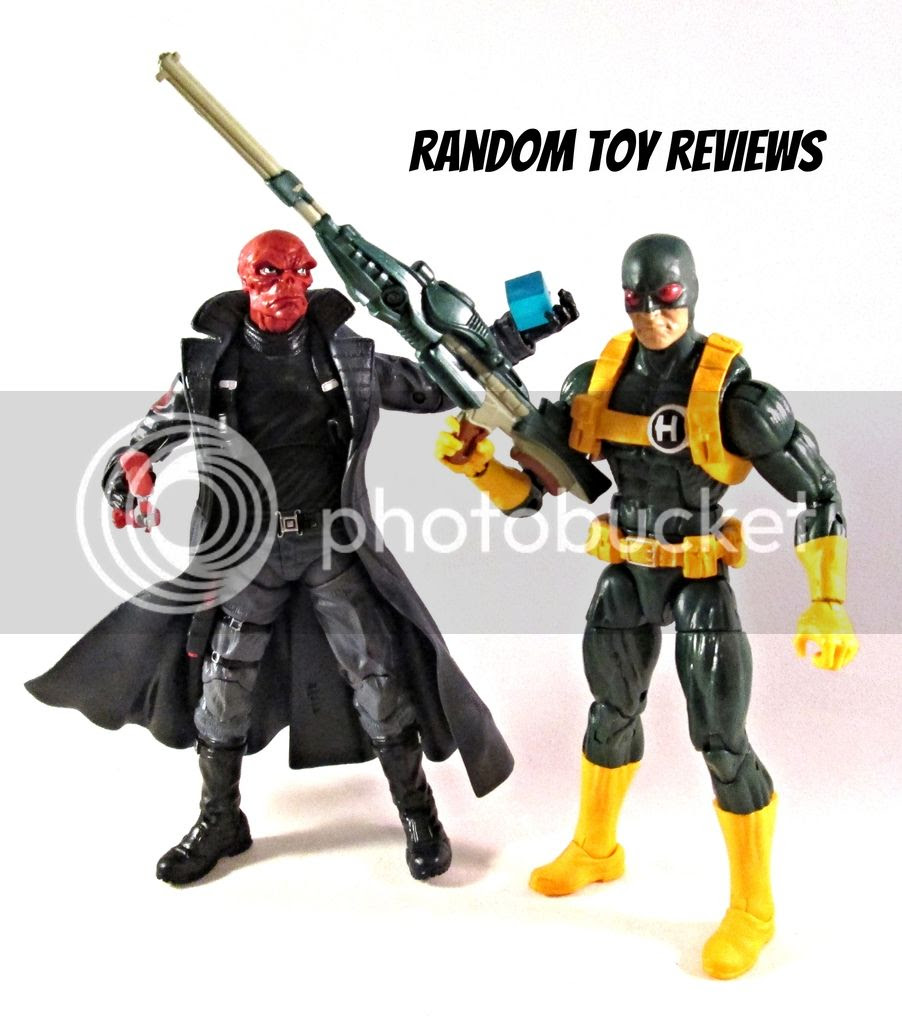