At some point in the last few years I've found myself collecting vintage Transformers Generation One knock offs. I'm not exactly how I ended up on this road, but it's been a fun ride. Not only do I find it fun collecting these oddball items, but I also find it fun sharing my discoveries with the Transformers community. I know not all people care about knock-offs and that is why I've kind of narrowed my scope of collecting these to vintage G1 molds. 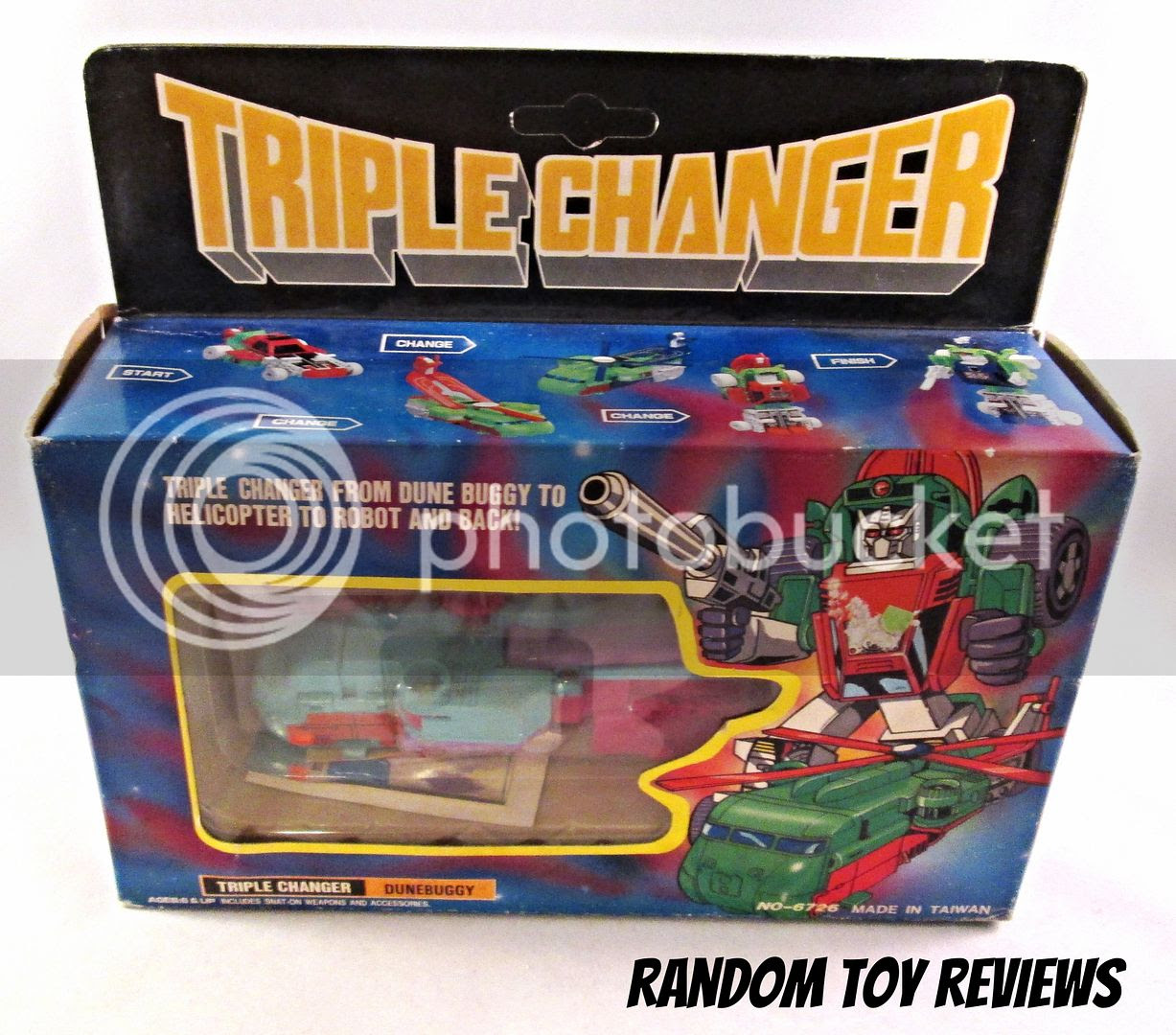 My latest G1 KO acquisition is one that I've seen a few times on eBay, however the high price tag has always kept me a bay. A few weeks ago however a seller in Italy posted a sealed specimen that I was going after. Sadly I was out bid and the toy sold for near $90. A week later the same Italian seller listed another version. This one had been opened, but was complete with unused stickers. This one ended up with a slightly wallet friendly price and I was all too happy to be the high bidder. After waiting a few weeks it arrived. Triple Changer Dunebuggy, No-6727. Trying to find out information on toys like this is basically a dead end road, having based on the packaging and the number the toy received I'm going to say this toy falls under the KO banner, Metamorphs. I could be wrong, but if I am does it really matter?

As you can see Dunebuggy here, aka Sandstorm, features a box layout very reminiscent of his G1 self; complete with the Start/Finish transformation sequence on the top of the box. 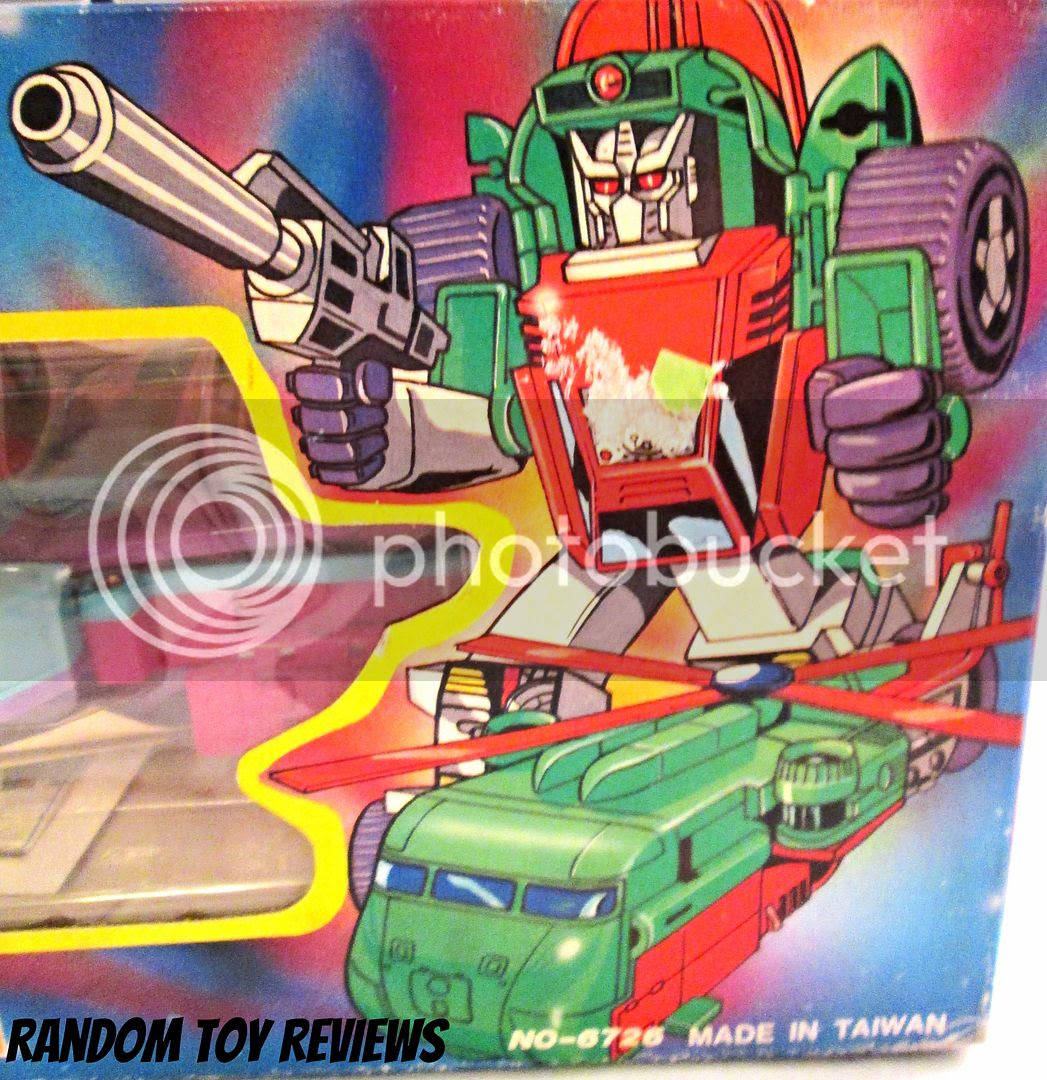 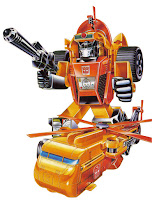 Thanks to Botch the Crab and his awesome Box Art Archive, we can see side by side the KO and the G1 artwork. I can see a few small, subtle changes, but overall it appears original art was just recolored for this KO release. 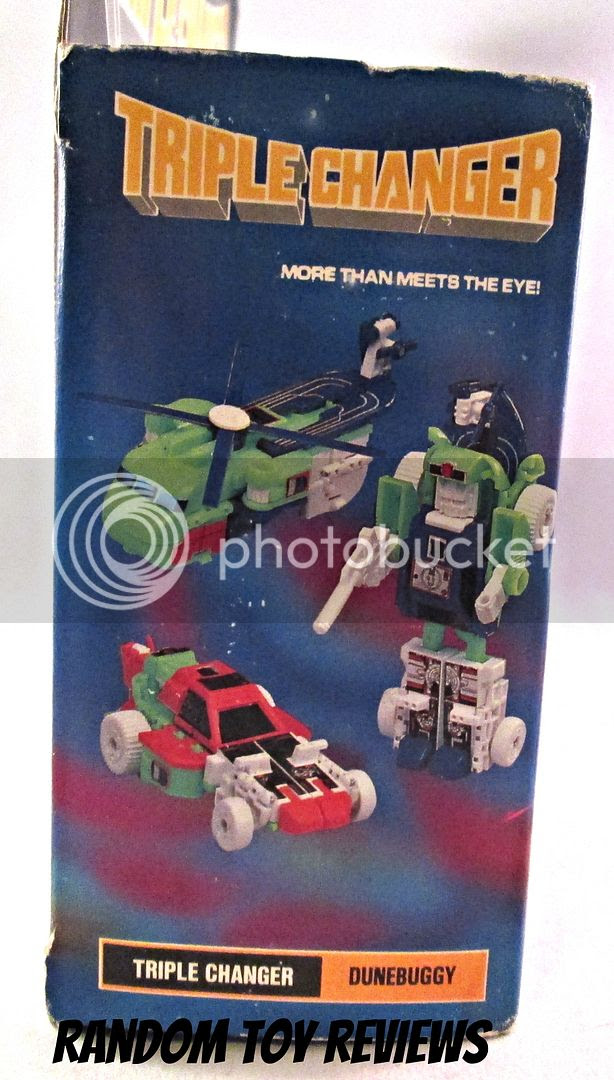 You probably have noticed by now that the image of the toy doesn't exactly match the toy inside the box. The box art features primarily teal and pink, while the toy samples sport more of green, blue and some pink. Even the 'Finish' step on the top of the box shows two different colored figures. The sample used for the packaging even shows the helicopter having the normal 4 blade rotor. Now whether there are variations to this KO I have yet figure it out. Personally I like the blue/white look a little better and I'd jump at the opportunity to pick up this mold in those colors...if it exists. 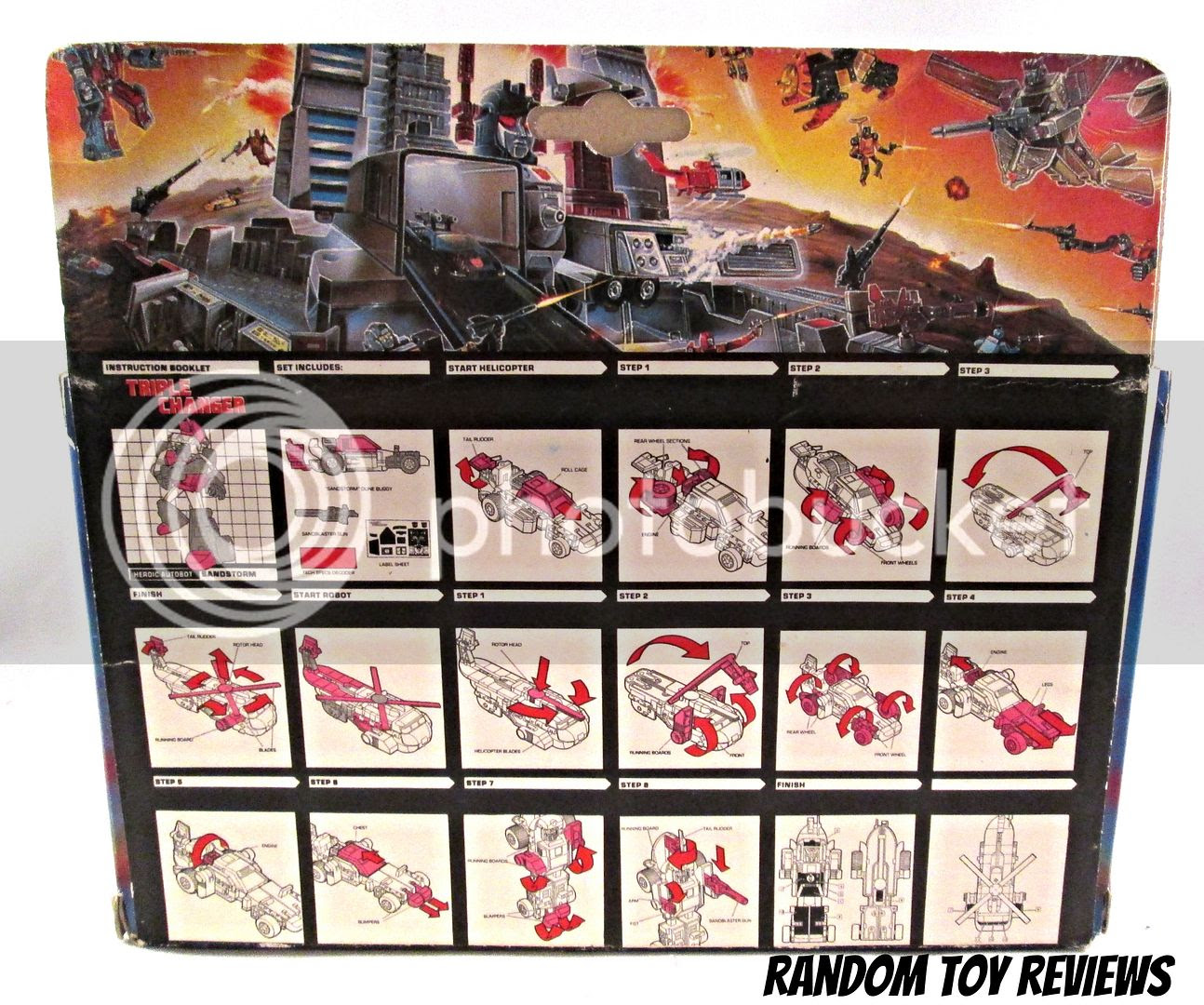 I love how the layout for the original instruction booklet has been shoehorned onto the back of the box. The 1986 box art found on the back of many Transformers seems to be unaltered for the most part. In a way it's a shame because I've always liked this battle scene, even if there are a few errors to be had. Botch the Crab again supplies an unaltered view of the epic battle scene here for your viewing pleasure. Enough of the packaging though, let's get this brightly colored toy out of his cardboard prison! Inside you'll find the toy is housed a very cheap, brittle plastic tray. I was afraid the end was going to fall apart in my hands just trying to remove the tray from the box.

Located right on top of the figure was a little plastic insert that seemed to help stabilize the figure inside the tray. Underneath the figure were a few sticker sheets and his gun. 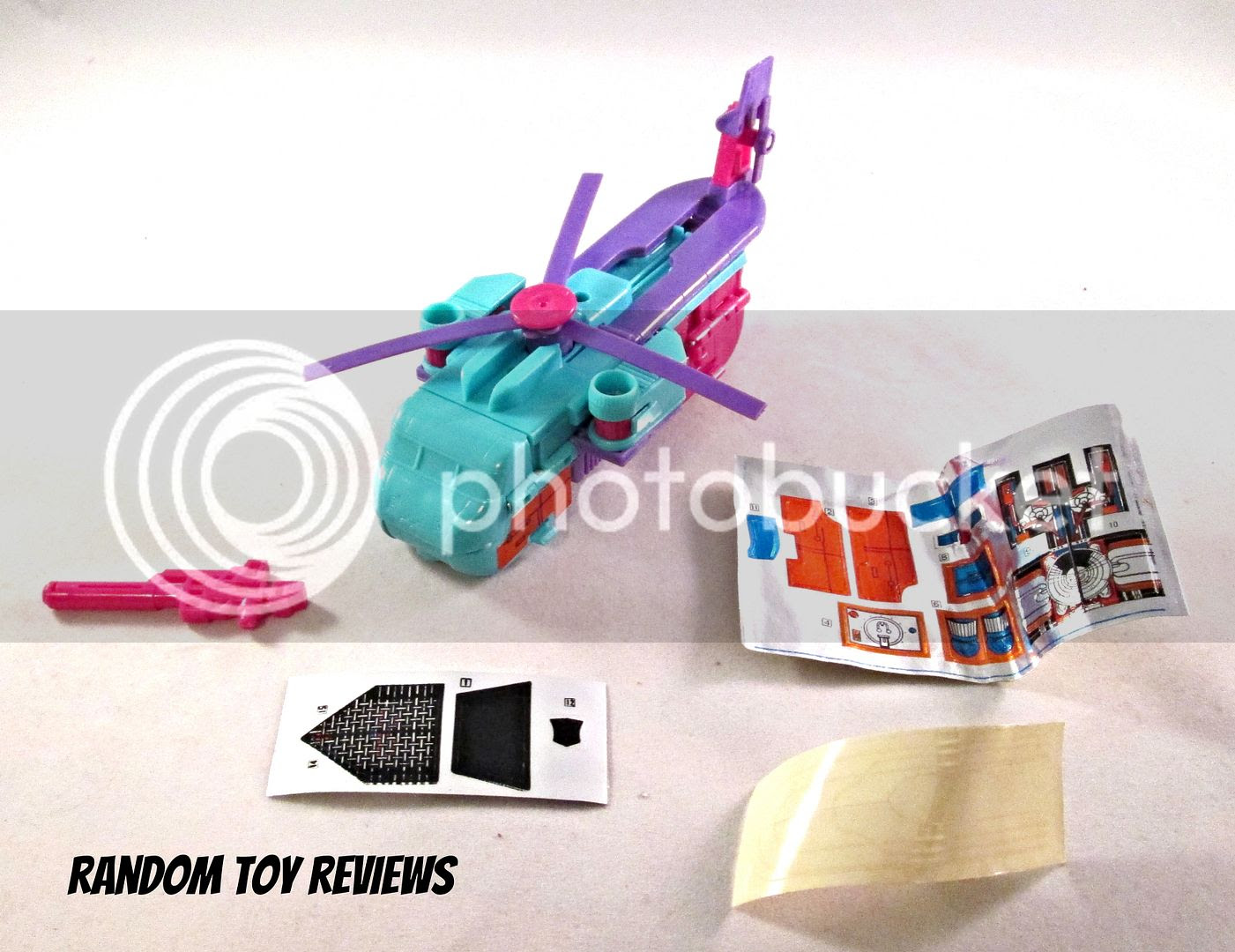 The first thing I did after getting the figure out of the packaging was to take these horribly curved sticker sheets in between some heavy books to try and flatten them out. Most of the stickers appear to be replicas of the original G1 stickers. I doubt I'll use these stickers as I have no idea 1) if I can get them flat and 2) if their quality is any good or not. I may have to eventually pick up some Reprolabels for Sandstorm. The sticker sheet in the lower right corner goes on the top rear portion of the helicopter. This gives it the white lines you may be familiar with on Sandstorm.

The other thing I noticed after some hands on time with the figure is the helicopter has 3 blades as opposed to 4. Well actually I noticed this when I got Sandstorm off the shelf for a few comparison shots. I thought the helicopter looked a little "off". I can't decide if I like the 3 blade look better or worse than the regular 4 blade layout. 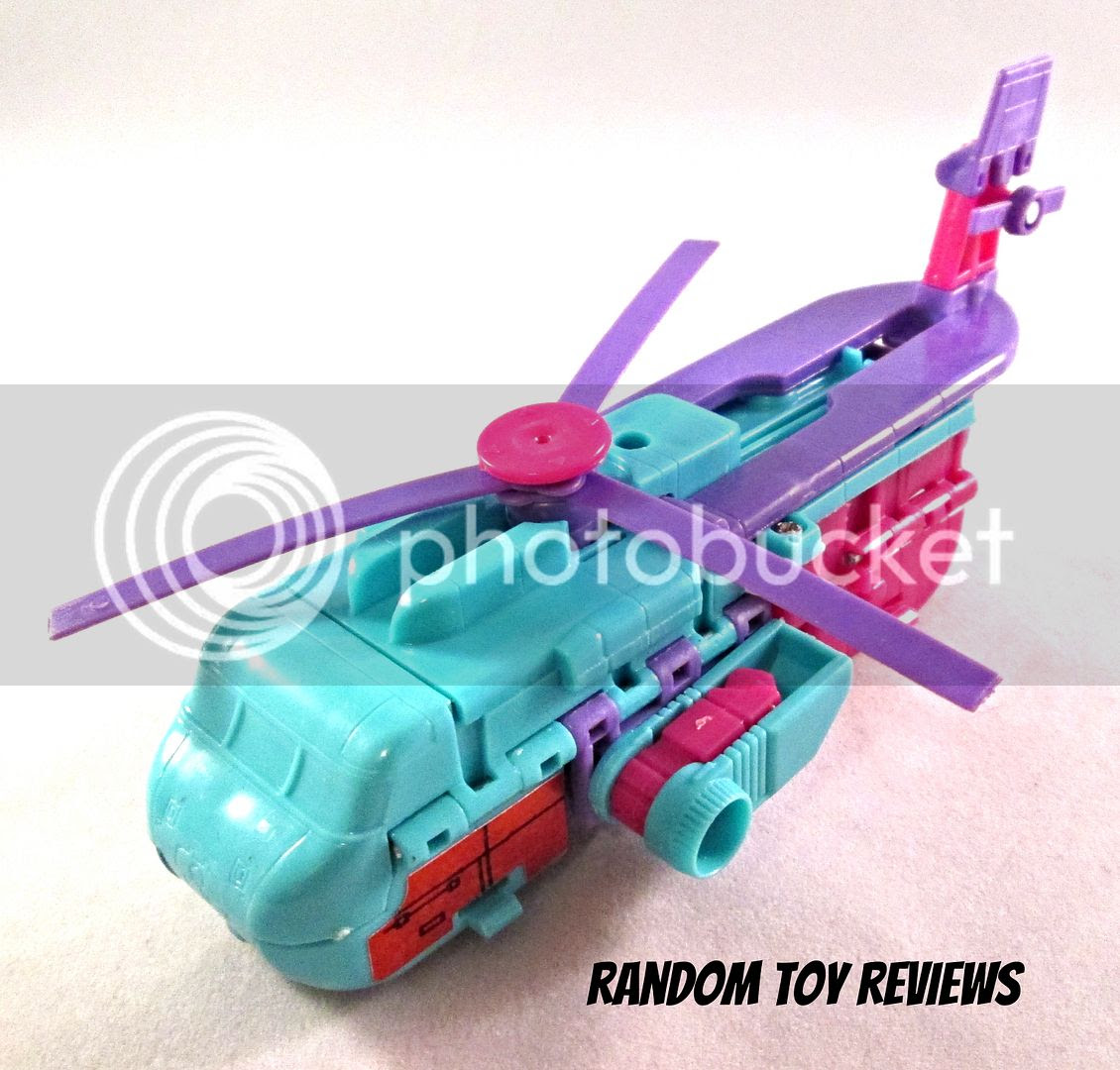 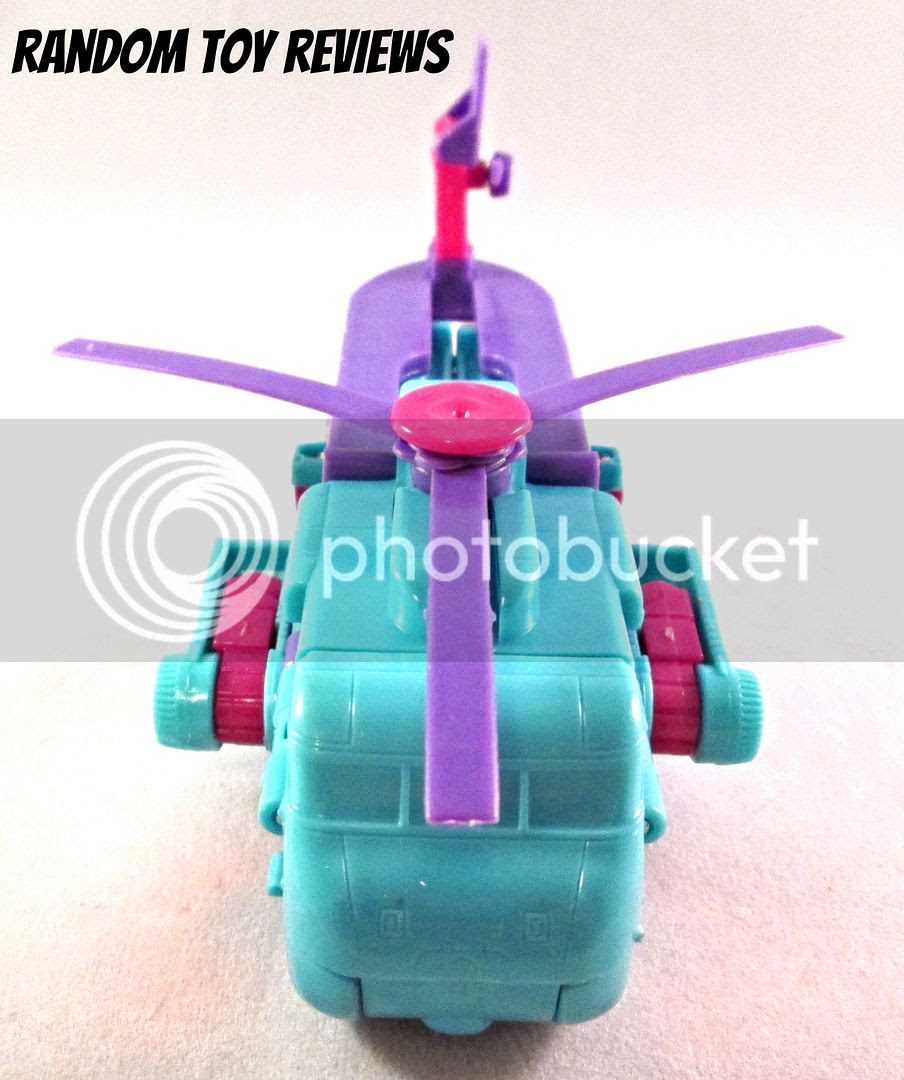 Outside of the change to the rotor blades, I couldn't find any changes to the mold itself. Surprisingly the plastic seemed to be of good quality. The figure held together really well and I didn't feel like anything was going to break off while I moved parts around.

The thing I've heard many people already mention about this figure is how it could be a great stand in for a G2 Sandstorm or maybe even an evil Shattered Glass version. However when I see teal, pink and purple on a transforming helicopter all I see is Spinister. 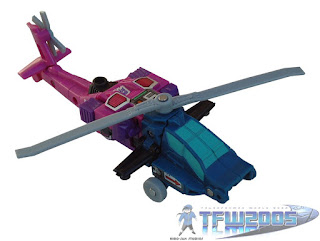 OK, it's not a dead on take of the colors, but it's close enough. Coincidence? The KO's packaging doesn't really have a date anywhere on it that I can find, but my guess is the KO was released after 1988 when Spinister was originally released. 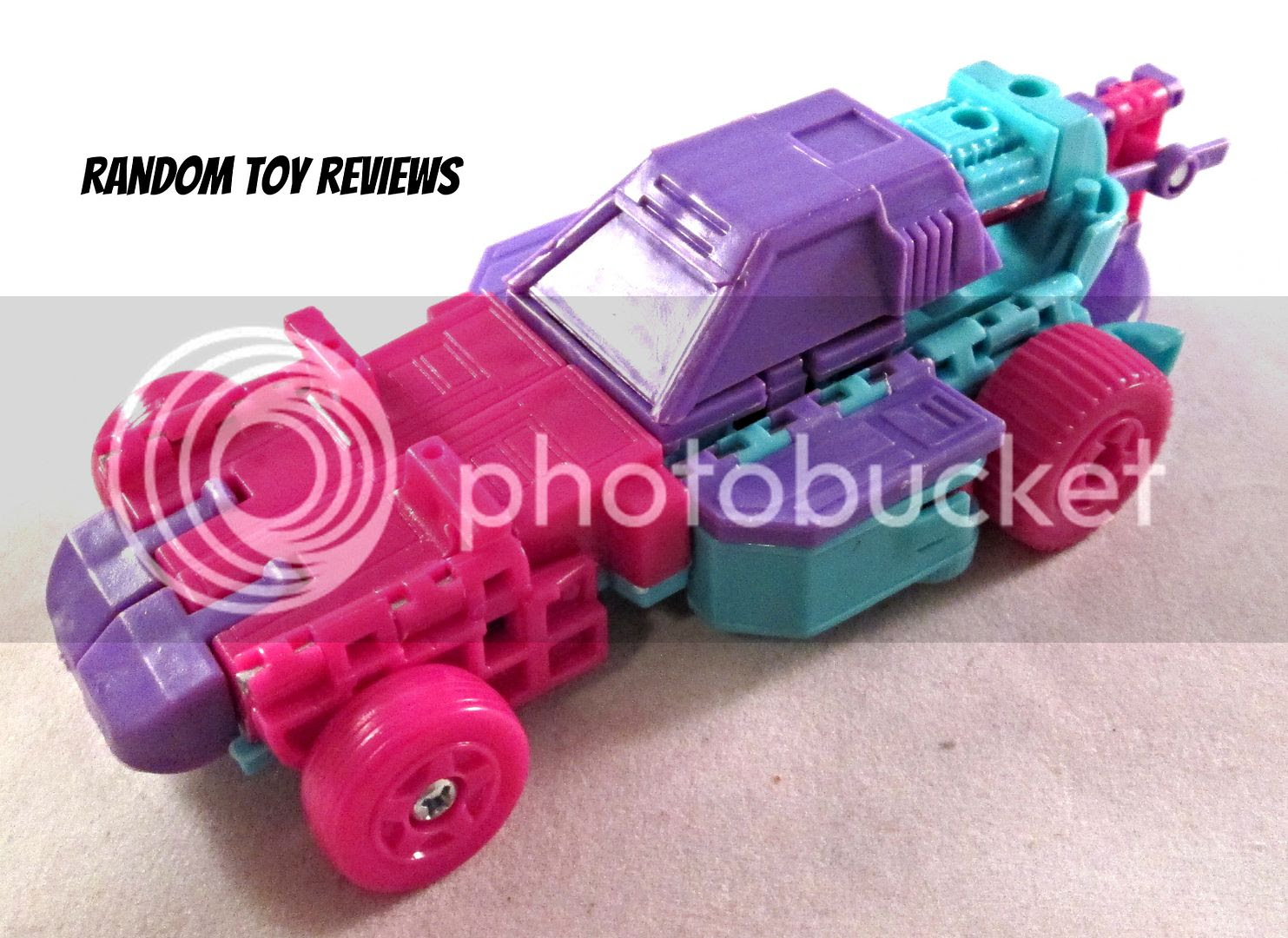 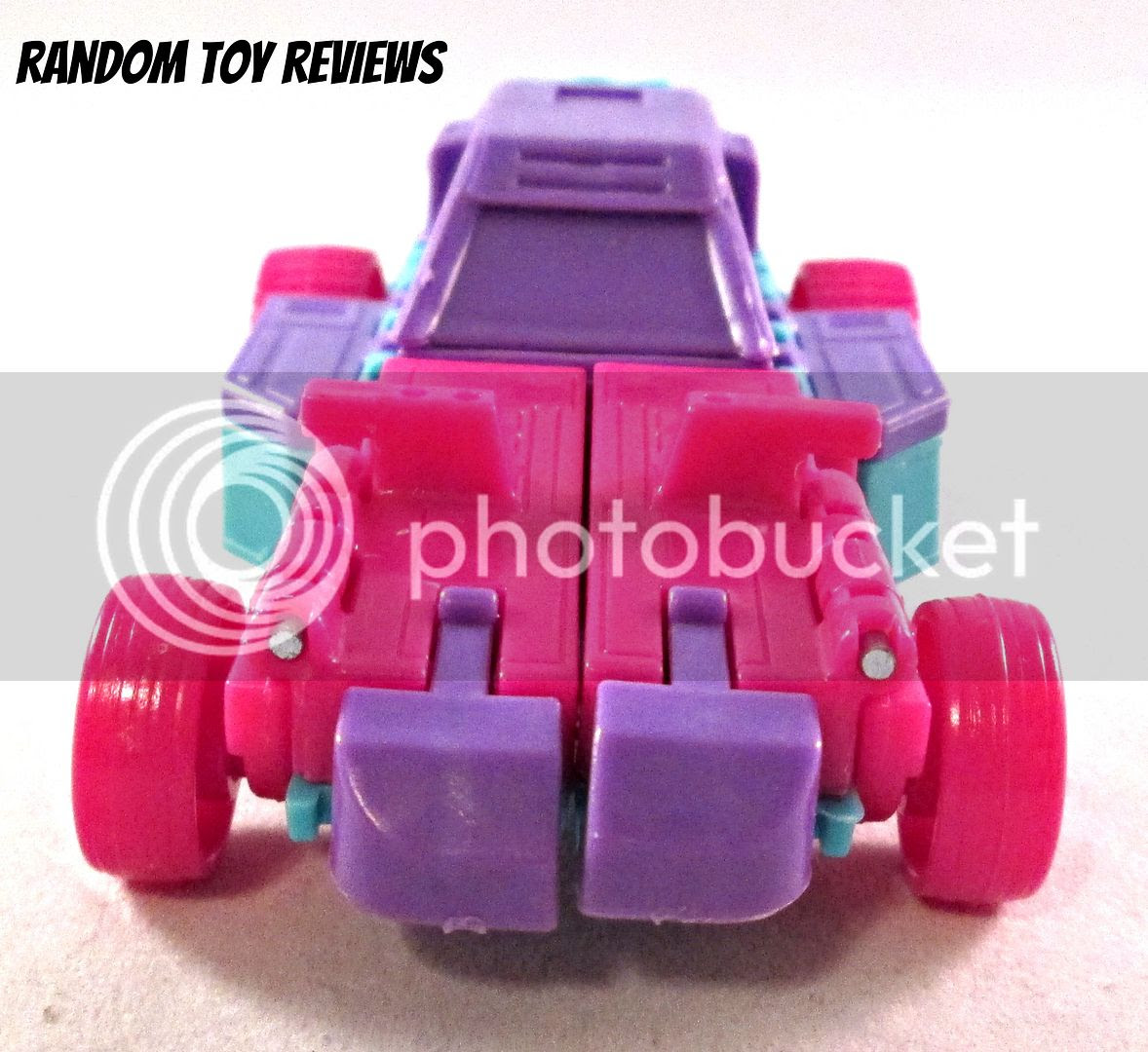 I could handle the helicopter's color scheme, but once I got him transformed to dune buggy...well it's a whole other story! Look at all that pink! Maybe if the wheels had been cast in another color plastic it wouldn't be so bad. Maybe the black windshield and window stickers would help break up this Willy Wonka inspired color scheme? Transformation to helicopter to dune buggy was fairly painless. Everything went back to where is should go and the parts that clip together seemed to hold just fine. 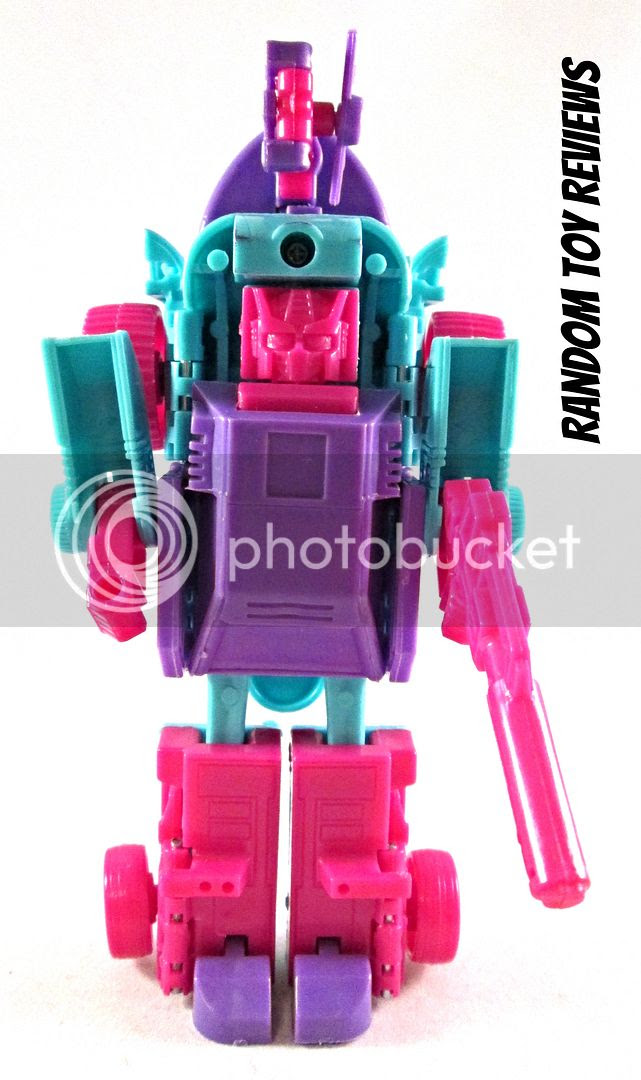 Remember how I mentioned that the plastic quality seemed fairly decent and how smooth the transformation from each form was. Look at his right arm. See how it looks a little different? Yeah, well I spoke to soon. While transforming it from dune buggy to robot mode the right arm broke off at the screw. I swear I didn't feel anything break or even notice this until I tried to flip up the arm and fold down the fist. Thankfully it looks like it was a fairly clean break and I've the part drying with a little super glue as we speak. I really wanted to finish with the photoshoot when I discovered the broken part that I went ahead with the photos of the figure as-is.

Believe it or not, but this is the first G1 KO that I've had break on me. I'm really hoping that glue does the trick because this figure is becoming one of my favorites in my KO collection.

Now what good would a review like this be without some comparison shots with the original mold? 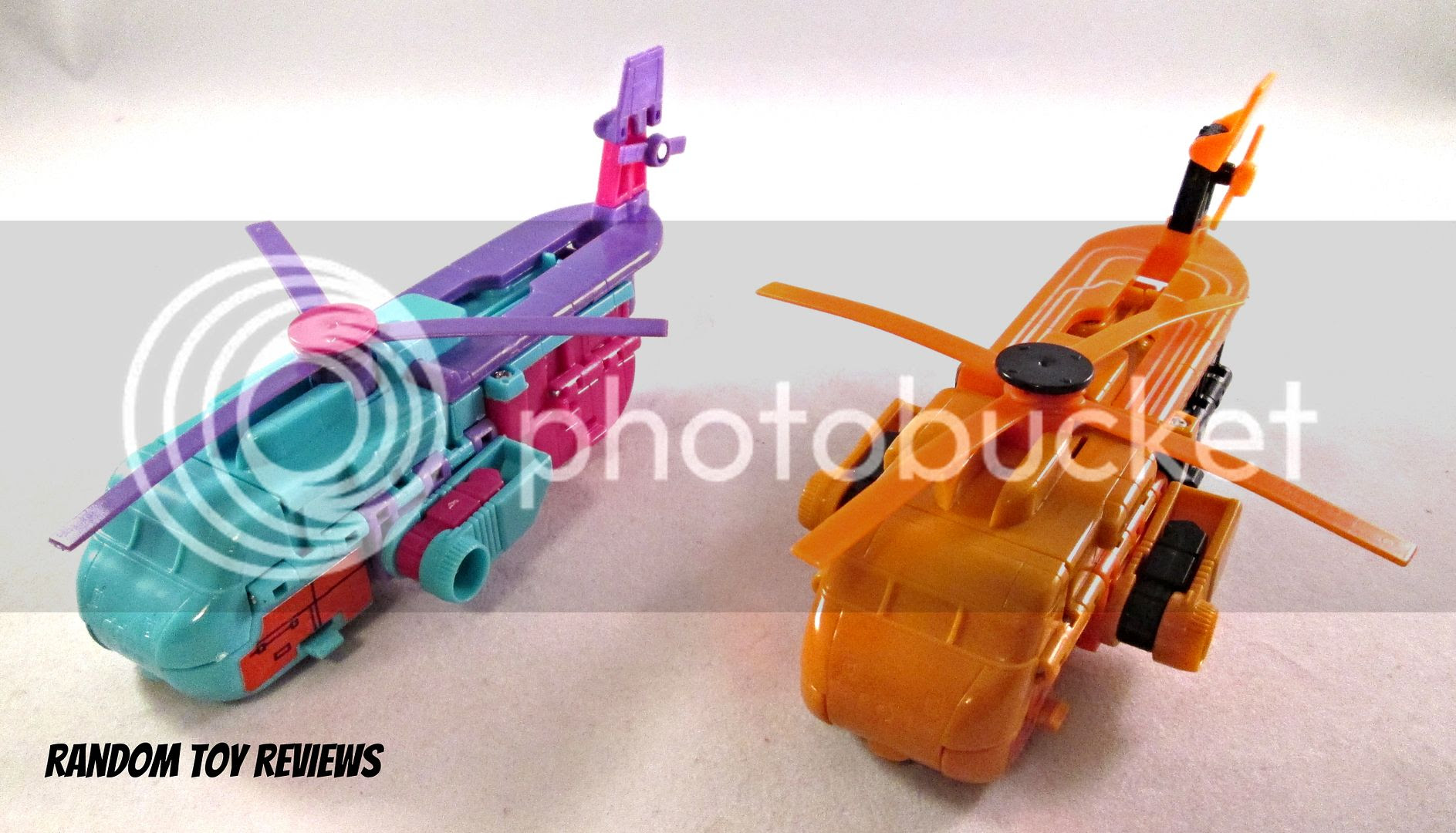 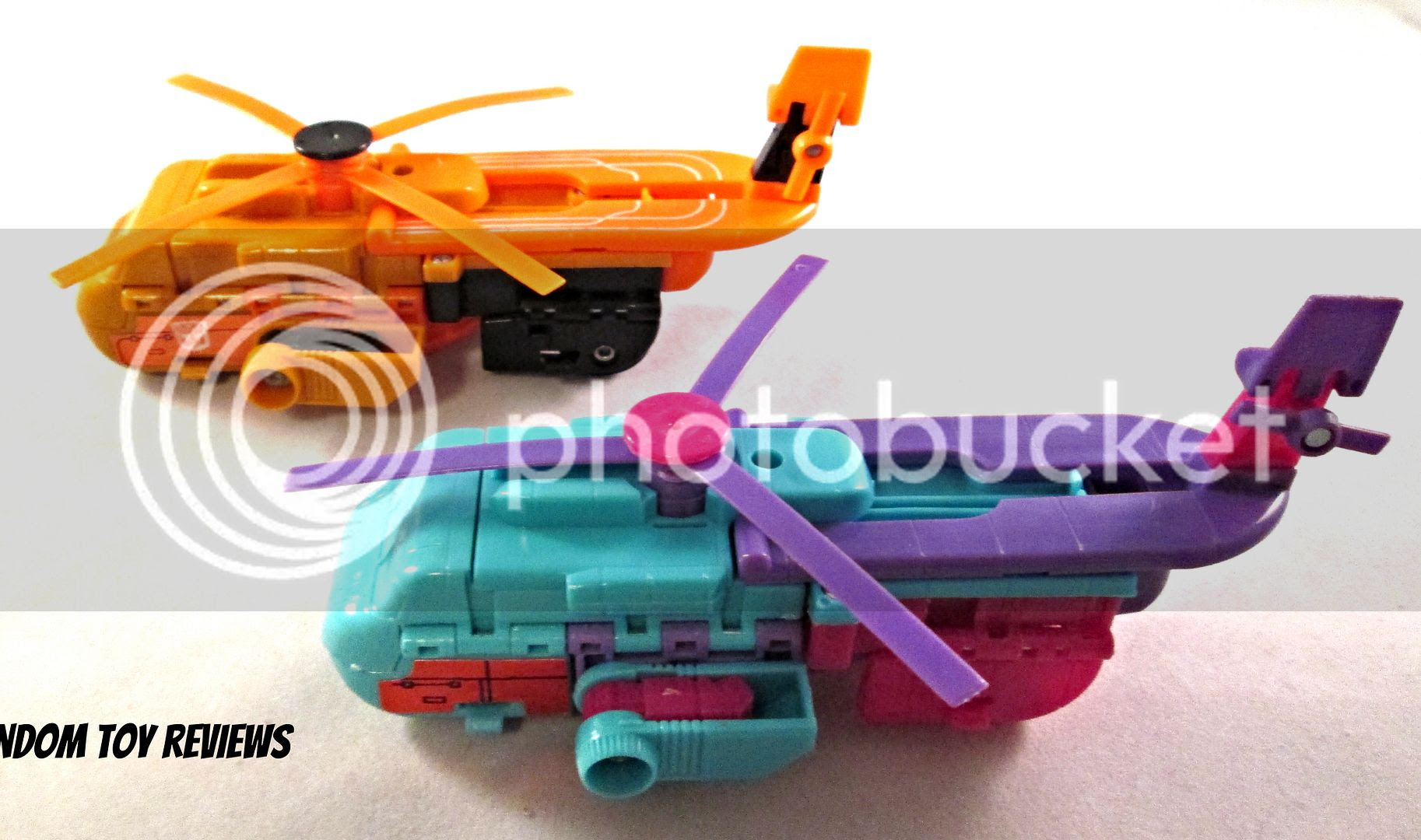 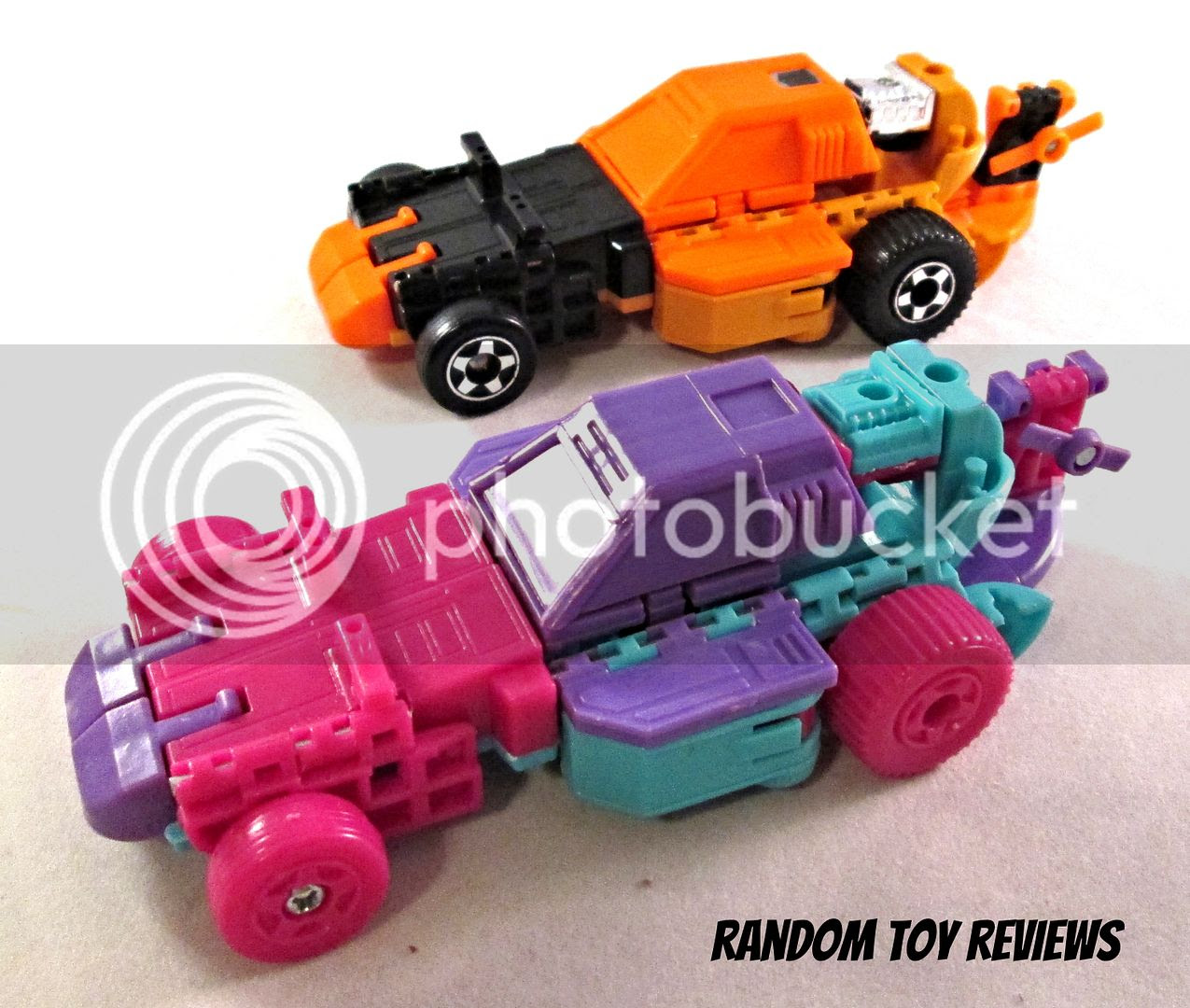 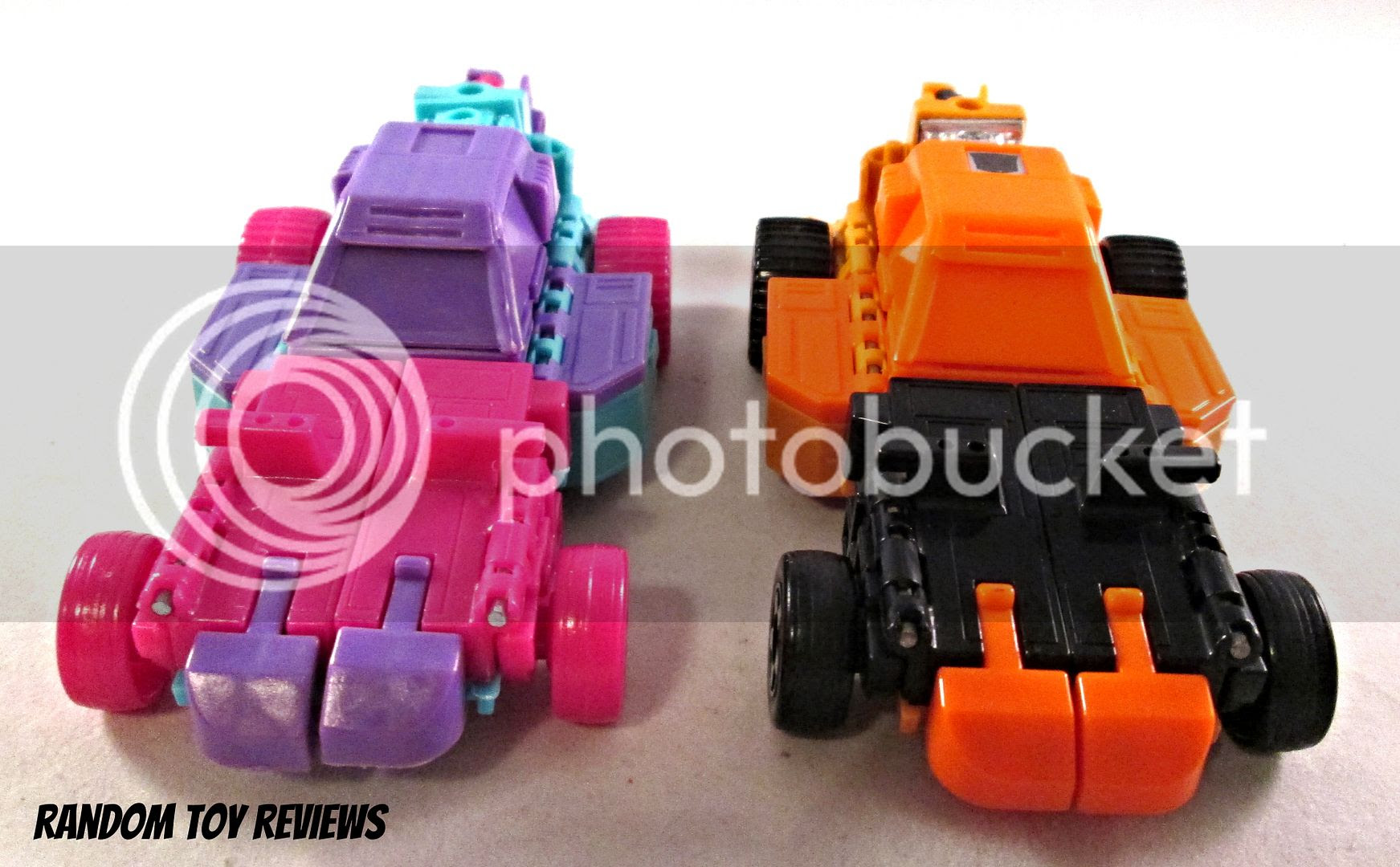 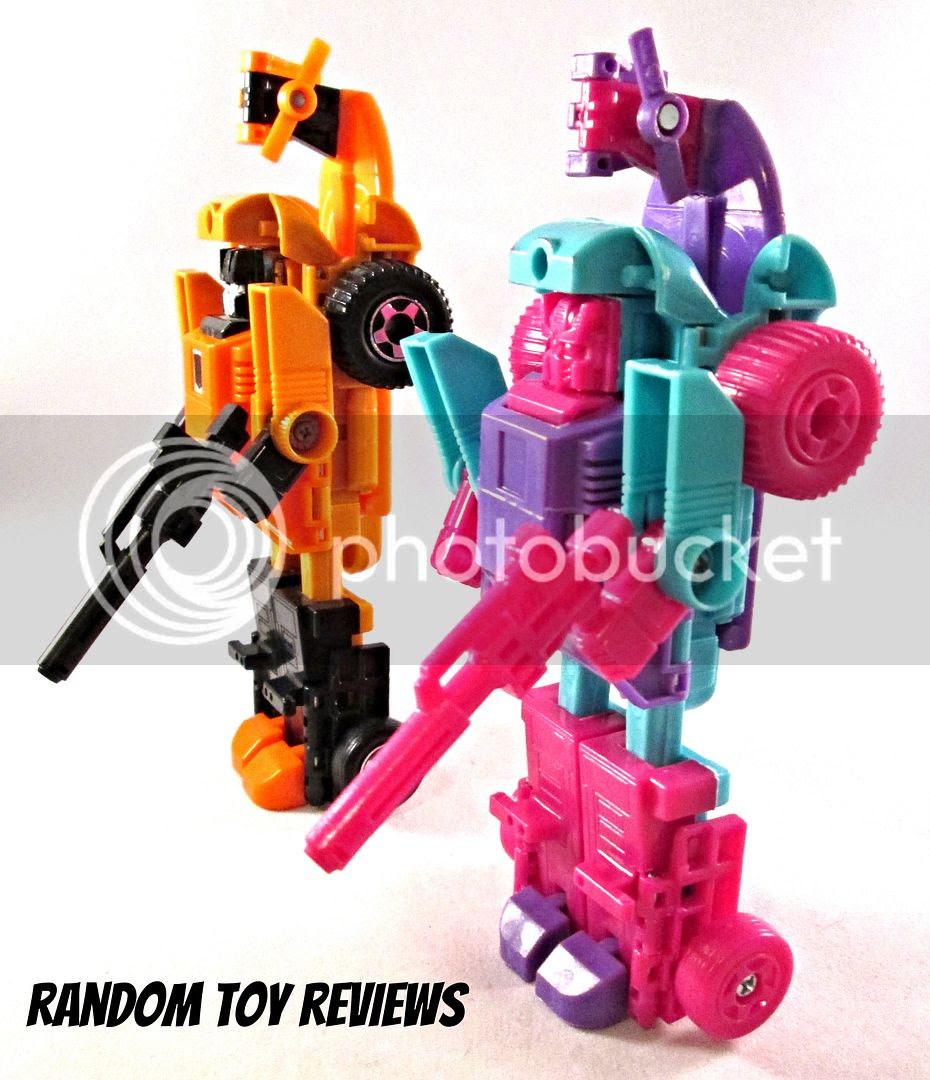 While I had the figure in each form I poured over the toy looking at each piece carefully to see if I could find any differences. Other than the obvious missing copy right stamp on the bottom of legs, I could find anything different.

Even the gun mold is the same from what I can tell! 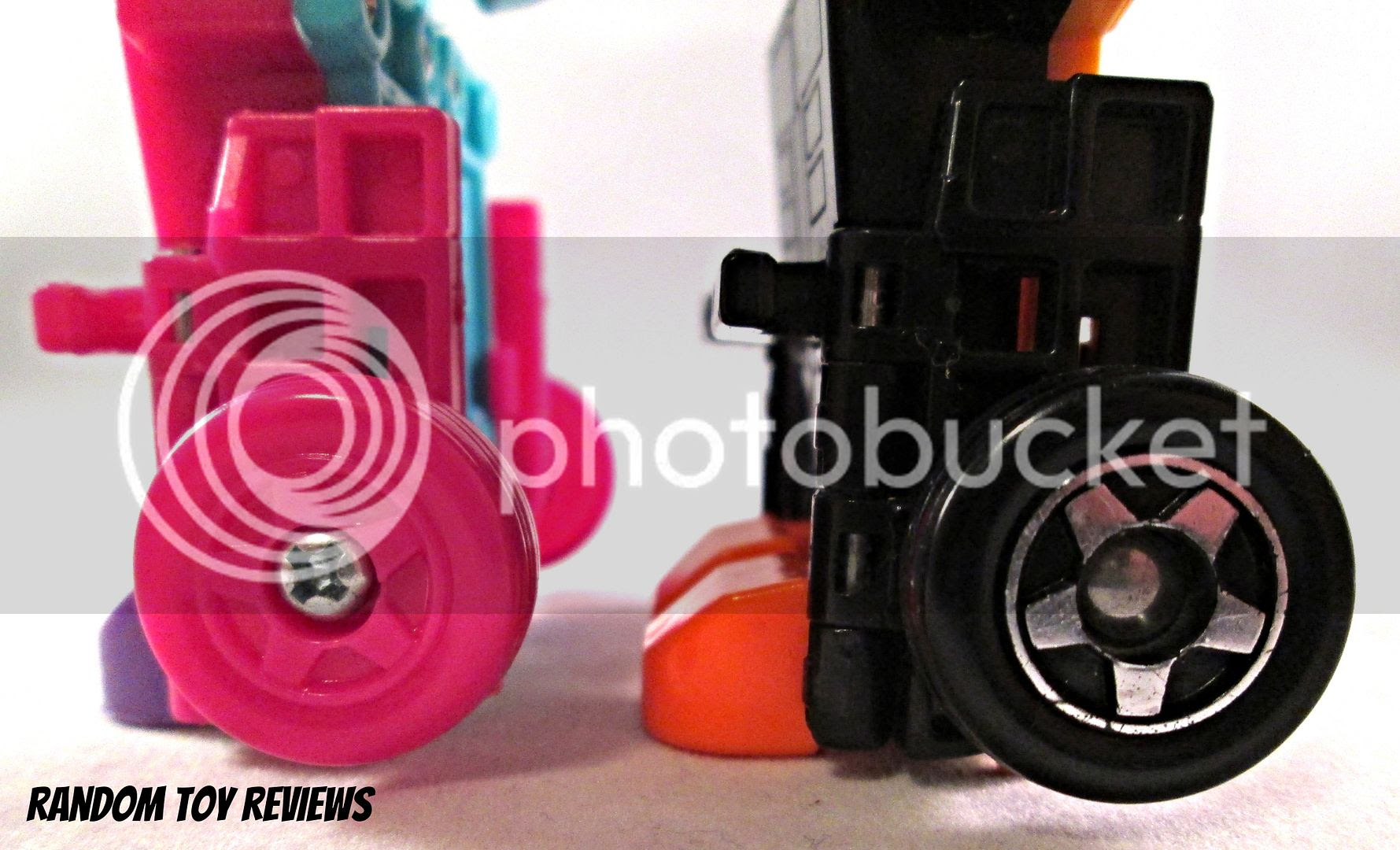 While repairing the broken arm I did notice the screw used was slightly different than the one in the G1 toy. The screw in Sandstorm's arm has more of a shield around the head of the Phillips screw where as the KO's Phillips screw has a larger head.

I then looked at the screws on the wheels and noticed that the rear wheels both share the same type of flat head pin, but the front wheels of the KO have a Phillips screw. The center hole on the KO wheel also seems smaller. Could they have by chance cast a new wheel mold?

I realize that some people reading this may be thinking "why did he purchase that ugly thing?" and others may be thinking "wow, this is kind of cool!". I guess for me the thing that makes this and other vintage G1 KOs so fascinating is the uniqueness of the figure. Whether its the background of the toy, the packaging, mold changes or just out there color schemes; collecting these G1 KOs has been a fun journey and one that I don't plan on stopping anytime soon.

I do ask that if anyone reading this knows anymore about the background on this release or knows if the blue/white version was also released, I'd love to hear from you. Please drop me a line and let know.
at 5:51 PM