The line has just started and to date there are only a handful of toys to choose from.  Agatsuma has designed a neat website that you can check out here, and from the pre-orders I've seen it looks like this line will be extended by several waves w/ new vehicles in the near future.  One of the neat things about these toys is that they are officially licensed by the likes of Nissan & Toyota.  One of the figures I initially chose was one of the Nissan Fairlady Z molds thanks in large part because it was a cool looking police car - DR-0002 Roidcop. 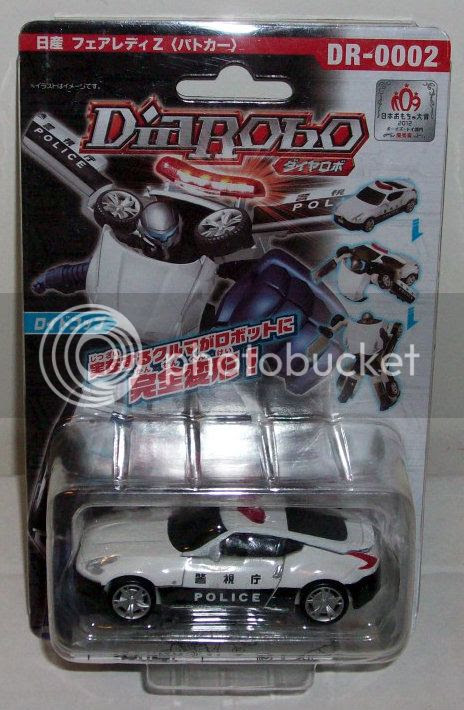 Priced at 460-600 yen a piece I didn't expect the toys to contain any die-cast metal and I was right.  These are all plastic and actually are fairly light in the weight department.  They don't feel cheap however. 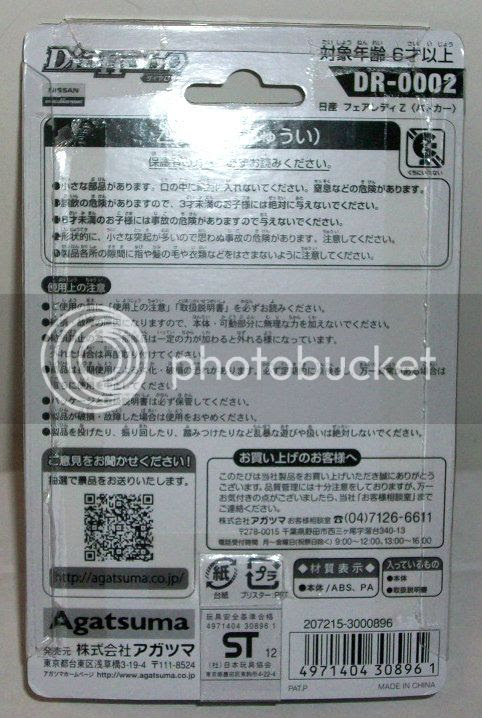 I love the packaging.  In typical Japanese style the plastic shell encases the whole card allowing you to remove the toy and repackage it for display with ease.  The only thing included inside the packaging is a small black and white instructions sheet.  Unfortunately there isn't a catalog or anything like that. 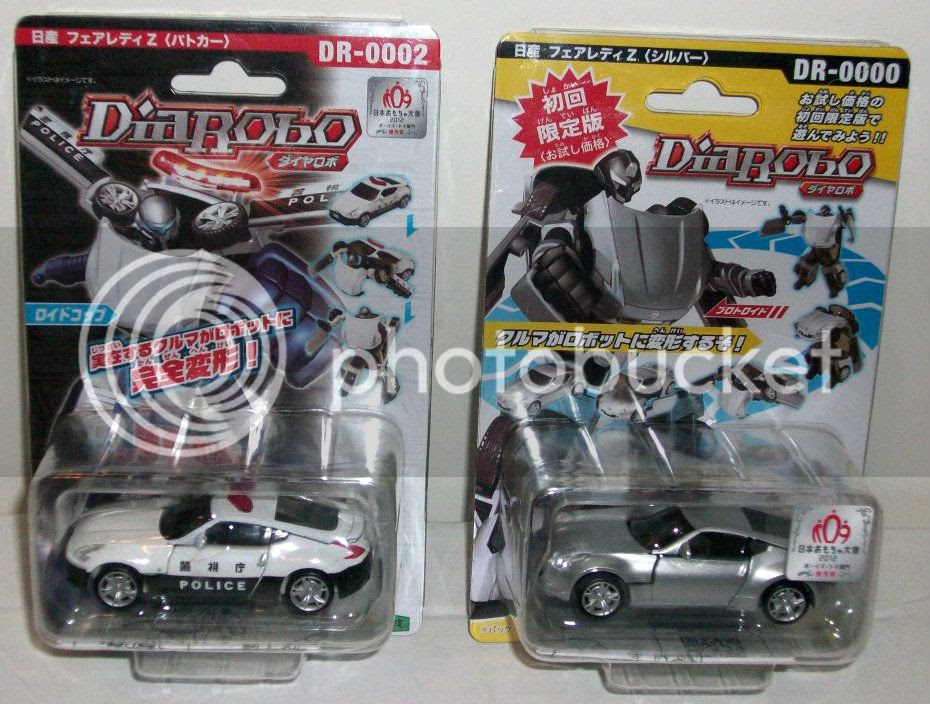 I also got the DR-0000 Protoroid after opening up Roidcop and discovered just how cool this particular mold was!  You'll see more of Protoroid in some of the comparison pics below.  There is also an orange version (Zeroid) that I'm sure I'll eventually pick up to round out the 3. 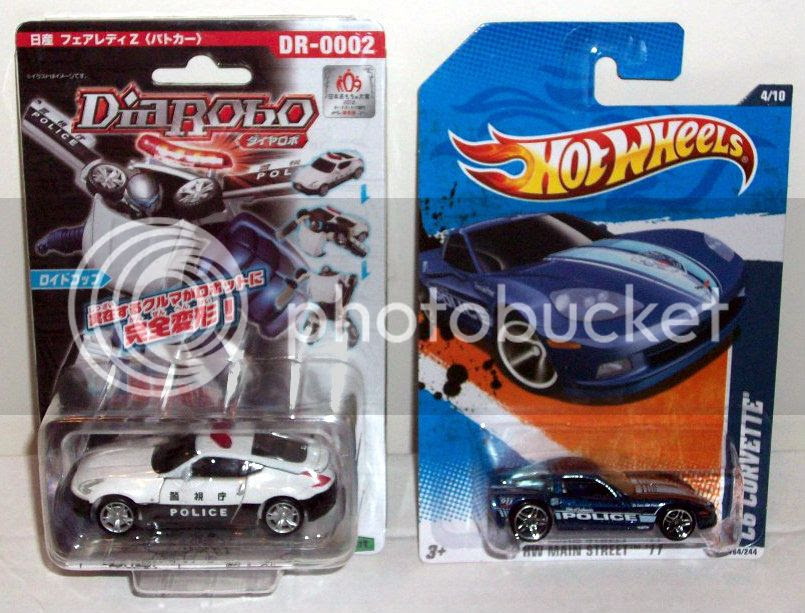 If you couldn't already tell these DiaRobo toys are very close to traditional die-cast scale.  The packaging is almost exactly the same size as Hot Wheels. 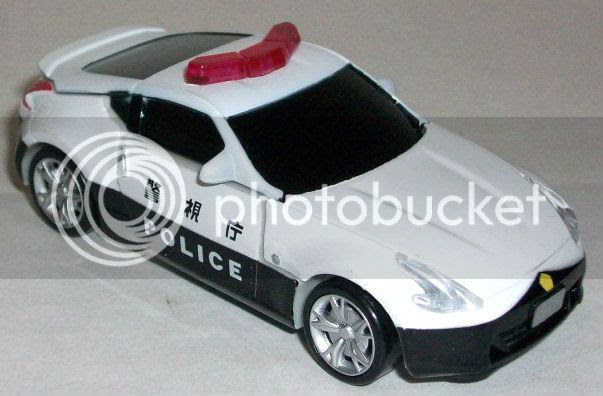 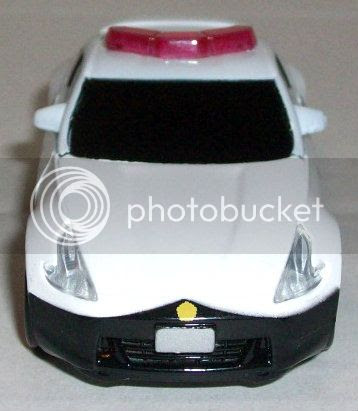 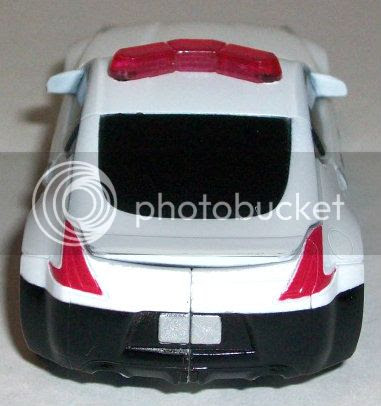 I love the look of this vehicle.  Despite the lack of die-cast metal the car still has a cool feel.  There obviously aren't a lot of paint applications, but what little there are have been applied quite well.  All four wheels are free rolling allowing these little cars to move about on a smooth flat surface quite well.  I was tempted to borrow my daughter's Hot Wheels track set to see if he fit.  Probably the most impressive part of the toy is that it holds together really well.  It's not floppy and the seams are very tight.  Just a quick glance at this toy and one may not know that it transforms into a robot.

Flip the car over and you can see the robot's arms inside the doors, but the head and the rest of the robot bits are fairly well concealed. 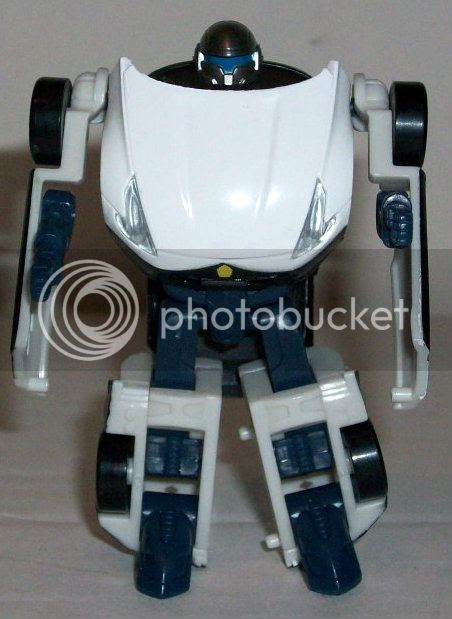 Transformation is really quite simple.  The arms/shoulders are on ball joints so you simply grab the car doors and pull them out and down.  Extend the legs, separate and flip down the feet.  The windshield and roof portion of the car lifts up and folds back revealing the folded down head.  Flip down the car's hood and flip up the head.  Pull out the arms from the inside of the doors.  Done. 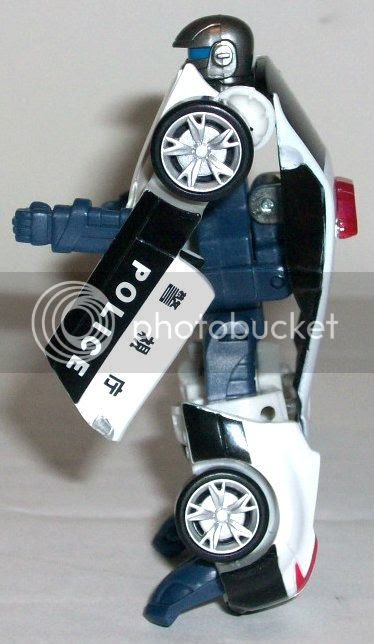 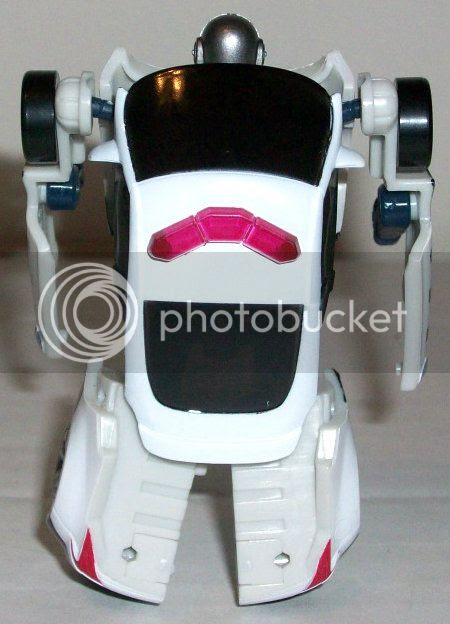 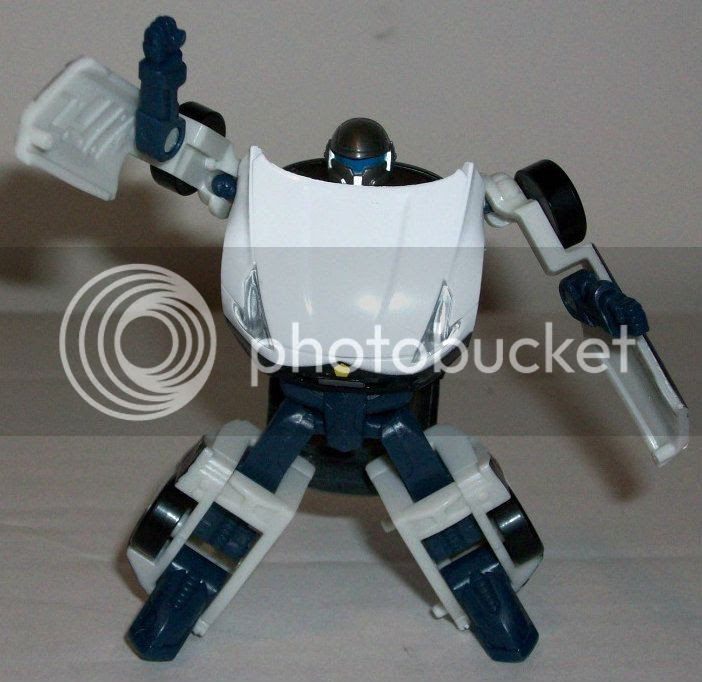 For a small toy I was surprised at the amount of articulation.  The head, shoulders and hips are all ball joints.  The head does have limited movement due to the car hood and basic configuration of the toy.  The arms just fold in and out, but the arms do have some range of motion.

You may have been able to tell in some of these photos that it appears a different type of plastic was used for the hood portion from the rest of the car.  The hood did photograph a little whiter than the rest of the toy, but in hand it doesn't look as noticeable.  My favorite part of the robot mode is the head sculpt.  I love the silver helmet like look w/ the blue visor.

I'm a huge fan of smaller scale transforming toys.  One of these days I'll share some Go-Bots, Machine Robo, Converters and some Transformers Spychangers from my collection.  I mention that because I went a little crazy with some comparison shots.  I'll let the pictures do the rest of the talking for me, but before we get there I'll just say if you like 1:64 scale transformable toys then I think it's safe that you'll like these.  I've got a few more I'll share in the coming days/weeks too because not all of them transform into robots.  How 'bout an ambulance that transforms into a t-rex?!  Stay tuned. 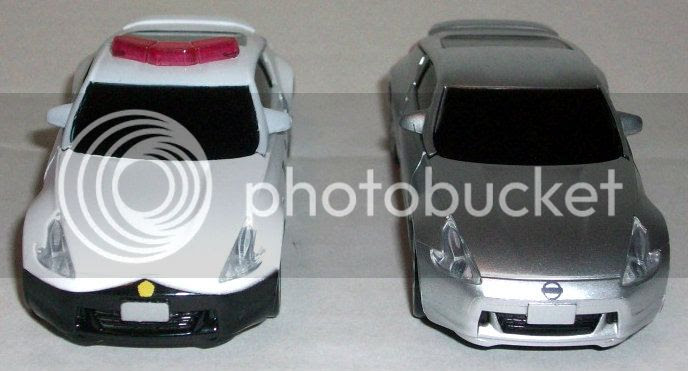 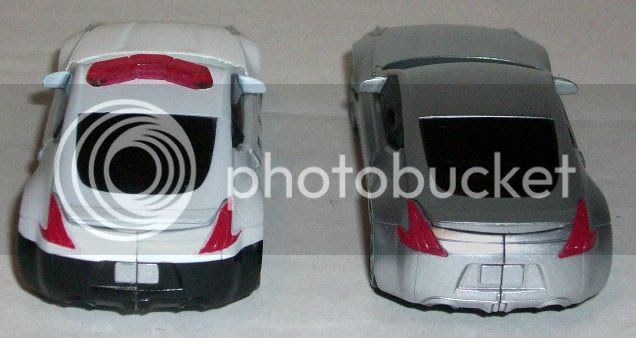 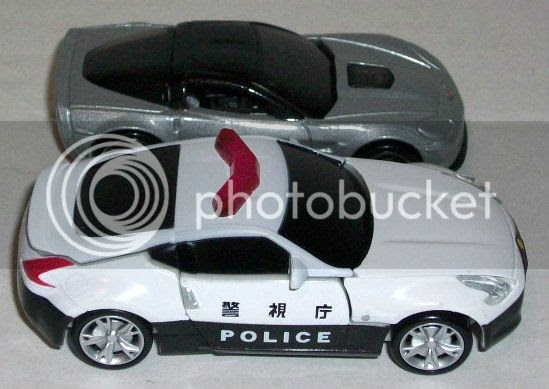 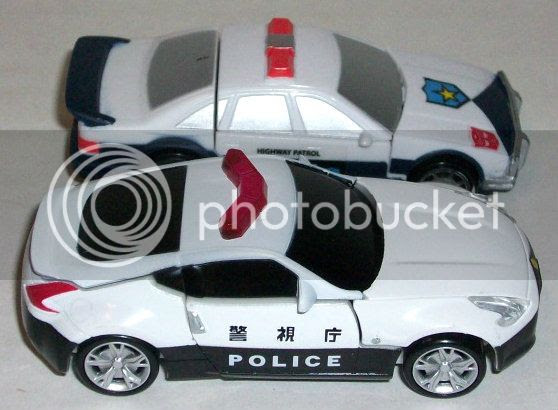 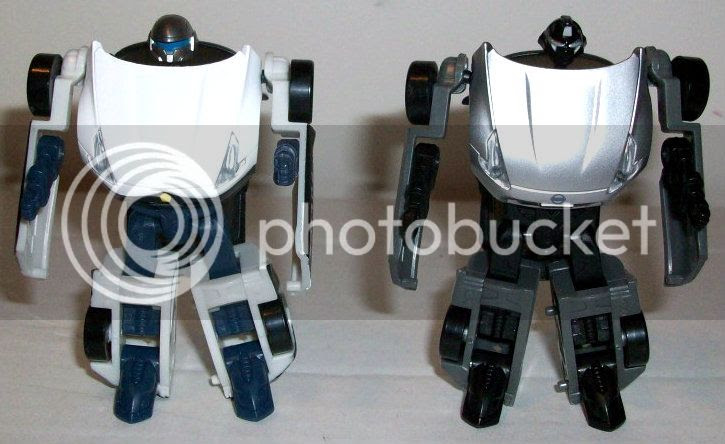 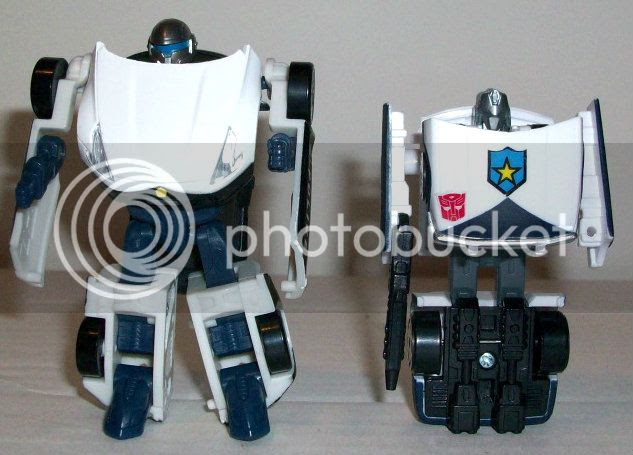 Well?  What are you waiting for?  Hurry on over to AmiAmi and pick up a few.  As soon as I can find my Reprolabel faction symbols a few of mine will be joining the ranks of the Autobots and Decepticons!