" Thank you for your cooperation. "

A no-nonsense, strictly by-the-book fellow. Has the entire Cybertronian Codex committed to memory. One of the very few Transformers who hates change. Commands respect in any situation. In vehicle mode, lights and sirens cause disorientation in his enemies. Armed with a semi-automatic laser pistol and a CO2 shotgun. In beast-mode, sensors allow him unprecedented ability to track his opponents. Eyes can fire 9mm lazer bullets. In robot-mode, equipped with an electromagnetic shield, and energon-cuffs.

Profile: "Freeze, lawbreaker!" are usually the first words out of Flatfoot's mouth. A no-nonsense, strictly by-the-book fellow. Has the entire Cybertonain Codex committed to memory. A true law-man's law-man. Despite this, Flatfoot is, by all accounts, an enigma. He is one of the very few Transformers who hates change. This can most likely be attributed to his forced 'transformation' from a vehicle alt mode (a changeform style which, ironically, was stolen by Bailjumper to commit crimes at The Leader's discretion) to his current Beast form. Refusing further change until his vehicle form is restored, Flatfoot prefers to remain in his animal mode. As a former Autobot Patrolman (and rumored member of the Cobalt Sentries) he continues to serve the cause and protect in his role as advisor to Bunny Convoy, offering advice and wisdom when needed. Unflappable calm. When others lose their way, Flatfoot is there to steer them back in the right direction. Commands respect in any situation.

Abilities: Sensors pick up the weakest radio transmission. Constantly tuned in to the police bands so that he can rapidly deploy to the trouble spots. In vehicle mode, lights and sirens cause disorientation in his enemies. Armed with a semi-automatic laser pistol and a CO2 shotgun. In beast-mode, sensors allow him unprecedented ability to track his opponents. Eyes can fire 9mm lazer bullets. In robot-mode, equipped with an electromagnetic shield, and energon-cuffs.

Weaknesses: Sometimes overlooks the big picture in his efforts to enforce the smallest rule. Easily upset by human youth, especially in their wild defiance of any authority. Has been vandalized more than once while giving a lecture to inner-city ruffians. He once stopped mid-speech to find that he was up on blocks with his engine and tires missing. Flatfoot doesn't feel he can best serve the cause in his current beast configuration. He longs for his previous vehicle-mode. Is resentful for having been maximized; this interferes with his normally even-handed judgement. 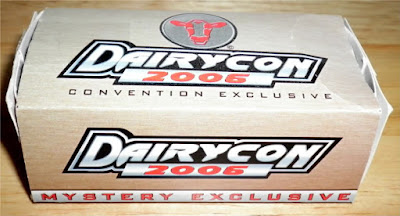 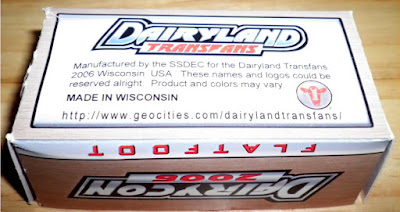 I am a fan of most of the creative and awesome exclusive creations that come out of the annual Dairycon Transformers convention...with the Spychangers being some of my favorite. The thing about these exclusives are they are severely limited and hard to come across on the secondary market. I don't remember when I got Flatfoot, but I do remember being extremely excited about adding my 3rd Dairycon Spychanger to my collection.

Flatfoot came packaged in a small mystery box. What I mean by that is you didn't know which Flatfoot figure you were getting. Was it the repainted Robots in Disguise Prowl 2 Spychanger toy or the lame McDonald's Beast Wars Happy Meal toy of Panther? Thankfully I knew which figure I was getting! 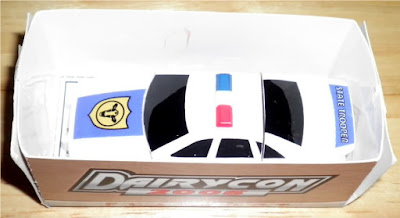 The small box held an inner tray that slid out to reveal the toy inside. In this case (thankfully) it was the Spychanger version! 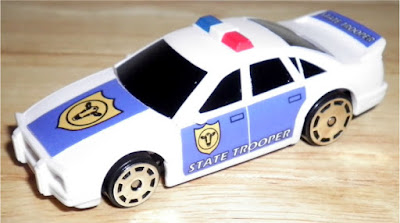 Flatfoot is a simple "redeco" of the RID toy Prowl 2. I'll admit that I'm really biased when it comes to the Spychanger toys as I love them all and I think they are all worthy of owning. The Dairycon people really outdid themselves with this particular toy. The new stickers they made for the hood, doors, windows and rear spoiler are excellent. If I didn't know better I might think this was a mass produced toy. Most of the toy in vehicle mode is unchanged besides the new stickers. 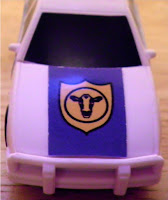 I love the Dairycon cow logo on the police shield! It just gives the toy even more character. 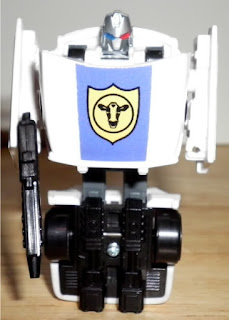 I was glad to see they chose to keep the gun as part of the toy. One of the best things about the last few Spychanger toys Hasbro made were the molds that allowed the weapon to be stowed underneath the vehicle...as with this mold. If you are familiar with these toys then there isn't much new here, except the paint added to the robot's face. 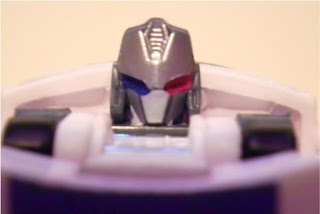 Awesome! The blue paint wasn't as carefully applied as the red, but I'm not complaining. This is another great touch they added to an already cool toy. The blue/red eyes on this toy reminded me of one of the Playskool Go-Bots toys, Cop-Bot as he too had light bar colored eyes.

I keep browsing the various Transformers message boards and occasionally eBay looking for one of the last of the Dairycon exclusive Spychangers (Bailjumper from 2005), but so far no luck what so ever.  If I ever find myself in Wisconsin around the time of a Dairycon convention being held I will find away to attend as I find their humor, stories and exclusives toys very entertaining.
at 11:06 PM