Born thousands of years ago, Apocalypse is the first mutant, and there is every likelihood that he will live to be the last.  His natural powers are vast, and are enhanced by the alien technology he has spent millennia bringing under his control.   No other villain has so shaped the course of the X-Men, as he has tested them again and again to ensure that only the strongest survive.


I've got to give a shout out (do people still say that?) to the guys over @ Action Figure Blues for supplying this figure.  I won it in their contest from last month...a contest that I failed to realize I even entered!  Seriously though make sure to stop by their blog and register on their forums as there is a lot of cool stuff going on there. 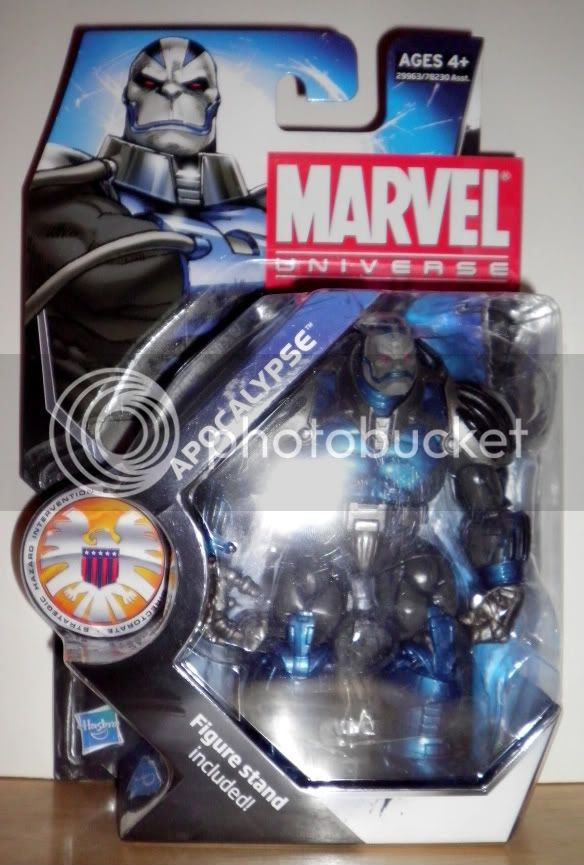 If your local Target, Walmart and related stores have been anything like the stores in my area then finding new toys, specifically new Hasbro toys has been a chore.  New figures have been far and few between it seems.  Apocalypse here hails from series 3 of the 2011 Marvel Universe collection.  I don't think I even saw all the figures from series 2 locally.

This is a figure that I would've jumped on immediately in the past for several different reasons.  Hasbro has done a great job in the recent past with the bigger figures in this line (Juggernaut, World War Hulk, Thanos) and this figure is of no exception.  Trying to conserve funds I haven't given much attention to the Marvel Universe line of late so in a lot of ways this figure is totally new to me.

I'm still unsure of who the artist is that is providing the packaging art this time around, but they have done a great job here.  For the most part the packaging hasn't changed much from past waves.  The only noticeable difference I saw was the new S.H.I.E.L.D. logo.  Sadly like previous waves the file and card have been replaced with a single black figure stand. 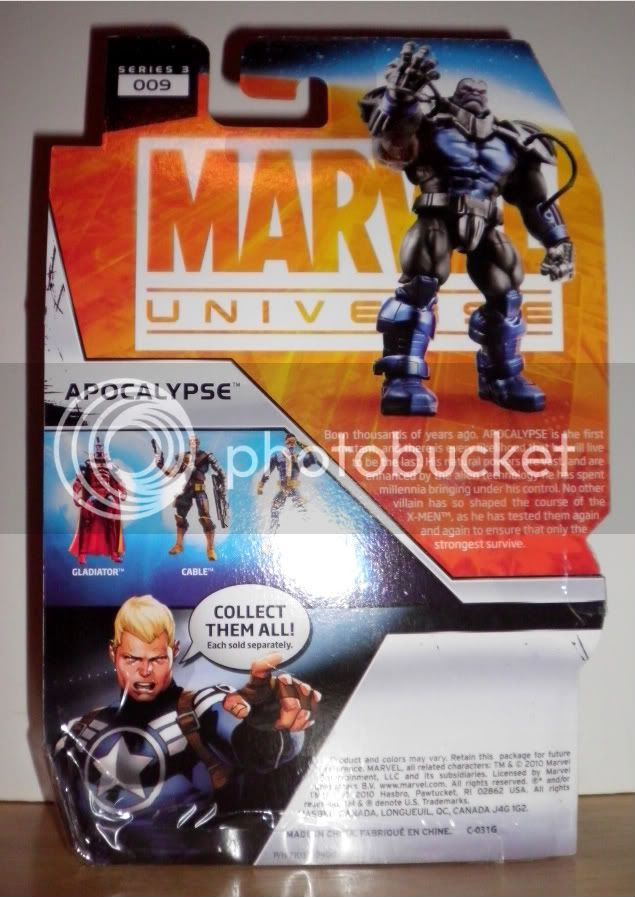 The back of the package features a little bio on the character.  Not having the most extensive knowledge of the X-Men and their villains it was interesting read.  I had no idea Apocalypse's powers have been augmented by alien technology (Shiar?).

Of course there are also the obligatory cross sells on the back.  After reading the current Annihilators mini-series I wouldn't mind finding that Gladiator figure.  Is that baby Hope strapped to Cable's chest? 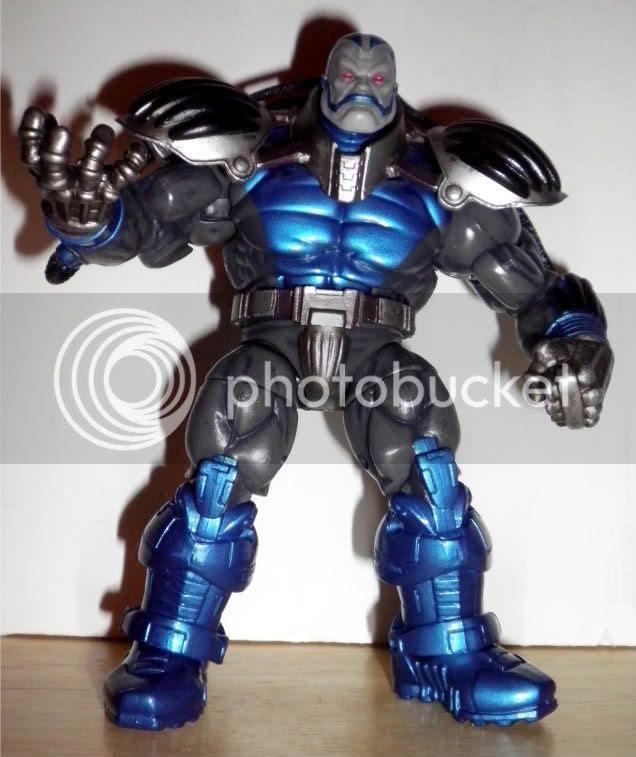 Apocalypse is one hulking figure.  If the sheer size of the 3 3/4" figure doesn't impress you then the awesome figure sculpt and paint applications should.  The head sculpt is dead on when compared to most comic book artists' renditions.  The metallic blue on the chest, wrist gauntlets and boots looks fantastic, especially when meshed with the dark gray and black of the armor.  The silver on the shoulder harness, fists and belt have a really nice wash to give it a worn look.  Hasbro even managed to nail the eyes by painting them red.  Best part of this figure in my opinion is that the paint apps look fantastic overall.  I can't tell you how many times I've found a figure that I wanted to buy and ended up putting it back because of sloppy paint apps.

Like with many of the other larger figures in the Marvel Universe series Apocalypse features a good amount of articulation.  His head can rotate a full 360 degrees, but the shoulder harness' collar does hinder the range of motion just a little bit.  The same limitations can be said in the shoulder area.  The shoulders feature a large rounded ball joint that hides underneath the large shoulder pads.  Thankfully the plastic used for the harness is a little softer allow you to still pull off some good arm poses.  The arms swivel at the biceps and elbow areas.  The wrists also rotate a full 360 degrees.  While it may not appear at first glance Apocalypse does feature midsection articulation.  There isn't a lot of motion to be had here, but it's a nice touch.  I like the fact this this joint (if you can call it that) is practically hidden.  The top half of the figure does rotate a full 360.  The legs appear to be a ball and socket joint giving lots of motion.  You can reposition the thighs a little bit, but the sculpted muscles won't line up if you move them around too much.  Both the knees and ankles feature your standard articulation.

If there is one negative thing about this figure that I witness right off the back is he seems to want to hunch over a little bit.  This causes him to look as if he is staring at the floor as if Kitty Pryde was poking her head through the floor!  You really have to work that mid-section joint to keep the top half of the figure in the upright position.  I can see this joint wearing out over time. 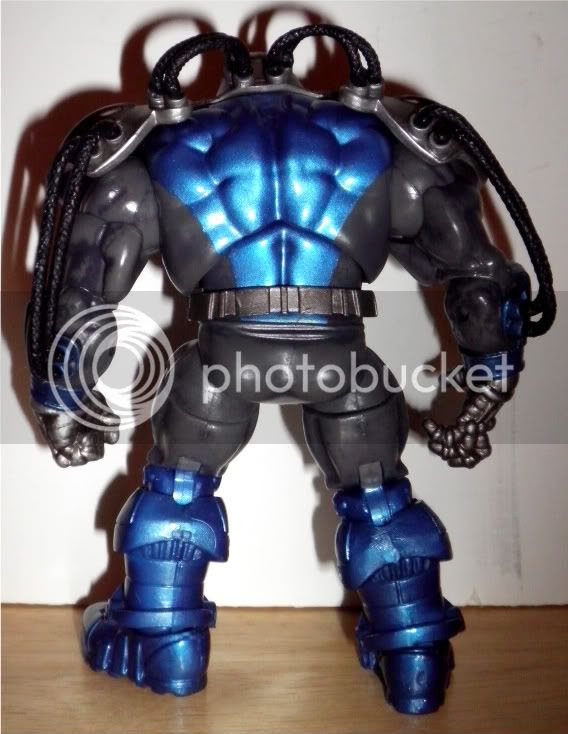 On the back of the figure you can see the mid-section joint a lot better.  The various black hoses that are attached to the shoulder harness and arms are much more visible from the back.  I should mention that the harness and hoses are permanently attached. 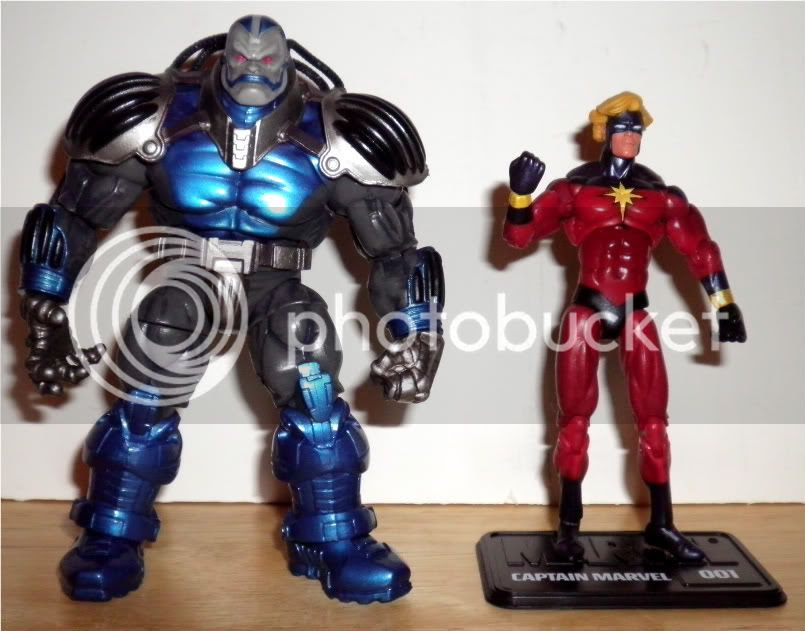 If I wasn't so unorganized right now I would've pulled in Juggernaut or World War Hulk for the comparison photo, but all I had at my fingertips was the awesome Captain Marvel!  As much as I like the included black stands I love the fact that the larger figures can easily be displayed without them.

This is an awesome figure and I'm so fortunate to have won him as I think people will eat him up.  That and I simply don't trust Hasbro's recent distribution of their various action figures.  If you do run across this figure in the wild then jump on it!  Whether or not you are a X-Men fan this is another home run type figure and deserves to be on display in your Marvel Universe collection.