The idea of blind packaging exclusive LEGO mini figures and selling them a $1.99 a pop is sheer genius! When I first saw some blurry pics of the figures on-line I just new I had to own a few. Then they were released without a lot of hoop-la and I had no idea they were sitting down at my local Toys R Us store - only being bought up by people to re-sell them on eBay for outrageous prices. Here's a look at 2 of the figures that I frustratingly paid $5 each for. 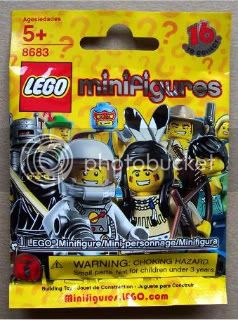 The figures come packaged in small foil bags that show several of the different figures possibly in the bag. It didn't take long however for someone to figure out that the non-UPC bar code on the back of the packaging can be used (with the proper info) what figure was inside. Boo, what fun is there in cheating?! 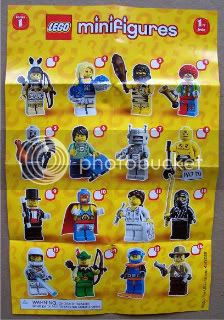 Each pack contains a catalog of sorts depicting all 16 figures in series 1. Now let's take a look at the first figure....THE ZOMBIE!! 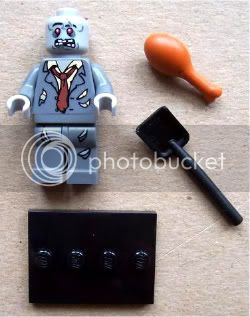 First off let me say how hard it's been for me not to buy several of this figure. I love zombie movies (esp. George A. Romero's flicks) so when I first heard there would be an actual LEGO zombie figure I freaked. This is so awesome, though the inclusion of the chicken leg accessory is a little weird. We all know zombie's don't eat chicken...they eat flesh! Yup, no zombie's yelling "braaaaains" here. I also love the little black stands included. I don't think I knew about those going in so that was a nice little surprise when I opened the bag.

The facial design and the clothes are spot on. I love it. Now I don't have to take the head & hands from my Castle goblin figures and to make zombie townsfolk. I only have one at the moment and with the high prices it's made it easier to resist buying multiples, but I know I'll probably end up w/ multiples at some point in the near future. 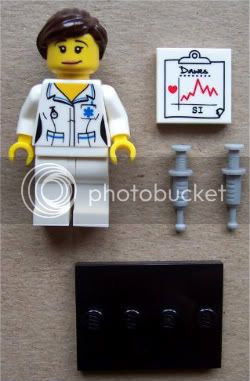 The other figure I picked up is the nurse. While I love the Castle/Kingdom themes I grew up with the Town/City theme. I don't own many medical sets anymore so I chose to pick up the nurse over the cheerleader. It was a hard choice, but I feel I made the right one. The nurse comes with a brown pony tail hair piece, nurse outfit, a chart and 2 syringes. Excellent. On second look perhaps she is a EMT and not a nurse. Whatever the case may be it's a great mini figure with great accessories. Now if only those older medical sets weren't so dang expensive!

I believe my next purchases will include the masked wrestler and the cheerleader. Stay tuned for more!