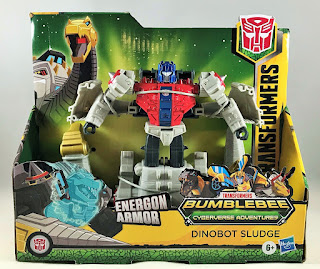 Cyberverse is a series that I've not really followed, even though I picked up a few toys when the series first debuted a few years ago. However when new Dinobot toys are released do you really need an excuse to pick them up? 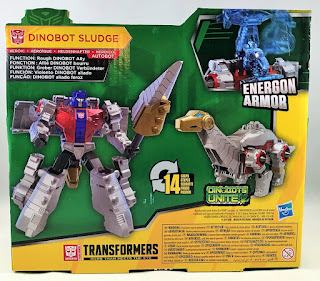 Sludge was released in late 2021 as part of the "voyager" assortment which feature the Energon Armor gimmick. Seeing how difficult it was to find select figures at local retail, I put this item on my Christmas list. On Christmas morning my mom laughed when she told me she couldn't remember if she ordered this for me our for either one of my nephews! 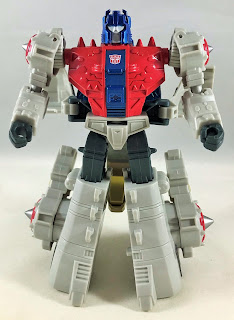 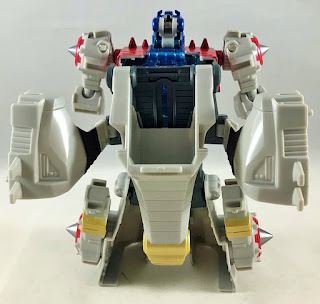 We'll take a brief look at his robot mode first since that is how he comes packaged. Growing up in the 80's Sludge is one of two Dinobots that I never owned, however the designers did a great job capturing the character's likeness. Sludge still has his famous "wings" on his back, along with the dino neck/head. With most of the figure being hollow he looks odd from the back, even a bit shorter if that's possible.
I was surprised when it came to how articulated the figure is. The head doesn't move at all, but that's due to the Energon Armor gimmick. The arms however are able to rotate a full 360 degrees and even swing out and rotate on a different joint thanks to the transformation. You've got an articulated waist, again due to the transformation. The legs attach via ball joints and give a good range of motion. Finally, the knees are on hinge joints. 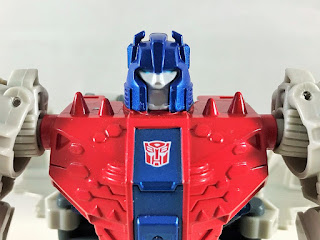 For such a basic figure in terms of sculpt/paint apps, I'm pleasantly surprised with the overall outcome. The headsculpt alone is pretty fantastic. The paint apps are limited, but applied well on my copy.

I'm going to assume since the Cyberverse line is targeted at a younger demographic is why Sludge doesn't come packaged with a gun and rather his tail forms a spear. In the 80's each of the Dinobots came with a red sword alongside their gun, so I guess it's not that far of a stretch for this version to come with a melee type weapon. The dino tail has a handle that unfolds and allows it to be wielded by sludge. It looks a little odd to me, but again I'm not the target demographic here! 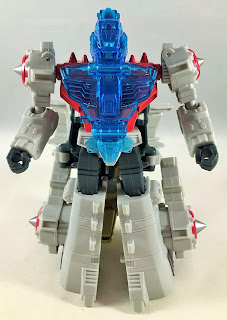 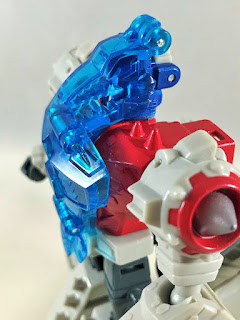 Personally I don't understand the Energon Armor gimmick, but I'm sure the 8 year old kid in me would have loved the spring loaded gimmick. Once you slide down the dino head/neck section in the back of the figure, the translucent blue armor pops out and up over the head and chest. The portion that covers the head has a skull like look...I tried to snap a photo that shows this off however it's hard to see. 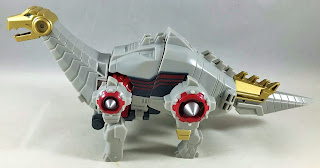 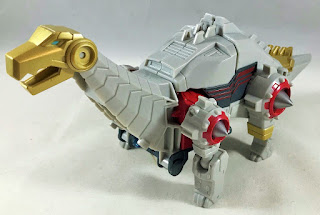 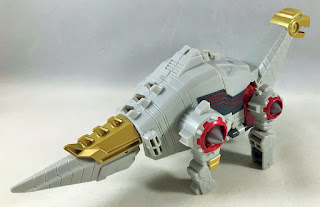 Now we get to the bread and butter form of this toy...dino mode! As a kid I would have called this a Brontosaurus, but scientists now say that isn't a real dinosaur so we'll just stick with the generic term of "dino". I'm so glad they opted to keep the traditional G1 color scheme intact for this release...I always loved the gold, silver and red all mashed together.
The majority of the body is cast in a dull gray plastic with gold actuating the head and part of the tail. There is a touch of light blue paint applied for the dino eyes. On the sides of the body is a darker gray area with some horizontal red circuitry? lines. The upper portion of the legs feature an embedded cone shape that for no other purpose looks cool.
With many parts of the figure being somewhat hollow, the overall weight of the toy isn't much. If you hadn't bought a modern Transformer figure in some time you may even think this was a KO, but this par for the course these days. That's not to say that this is a bad figure as I think the dino mode looks great and will be how I display him amongst my collection.
Comparison time! To give you a little bit better idea of how this Cyberverse Sludge may scale, I grabbed the nearest two iterations of this character and snapped a few quick pics. Let's start off with the original G1 mold. 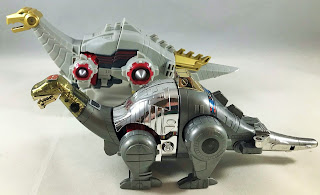 With Transformers collectors, scale can be a sensitive topic...after all it's over the place. While the Dinobots should be large, most of their toys, including the G1 molds are not. Here you can see that Cyberverse Sludge is just a hair larger than his G1 version. 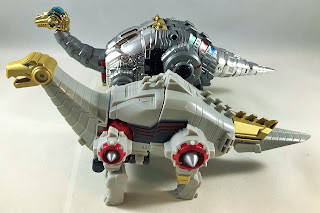 I also just happened to have a 3rd party version of Sludge nearby, ToyWorld's Muddy. I recently acquired him to go along w/ Roar (Snarl) and I was surprised at how similar in size both Cyberverse Sludge and Muddy are. They are near identical in overall length, however Muddy is more chunky overall.
I'm not if I'll track down the other Cyberverse Dinobots (only other I have is Snarl), but I am satisified with this figure. While the Energon Armor gimmick isn't for me, it's well concealed in robot mode and doesn't detract from an otherwise solid figure. If you are a fan of the Cyberverse series, or Dinobots in general then I think you'll enjoy the latest official version of Sludge.
at 11:25 AM