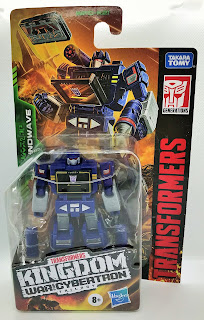 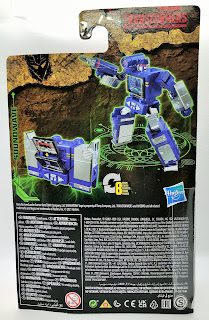 Kingdom is the third and final chapter to Hasbro's War for Cybertron trilogy and this series introduced a new size class, Core Class. Scale wise, these are very similar to the current "Legends" scale made popular by many 3rd party companies like Iron Factory or New Age. My first exposure to these size toys came with Optimus Prime and Vertebreak released at the very beginning of Kingdom. Now that we are close to wrapping up this trilogy, more G1 characters have been released with the latest being none other than Soundwave.
Soundwave comes packaged like all the previous Core Class figures, that on a blister card sporting the same Kingdom design that also features some stellar character artwork. The back of the packaging is rather simple with product shots of both the robot and alternate modes. 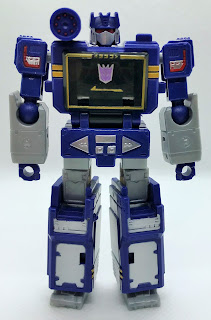 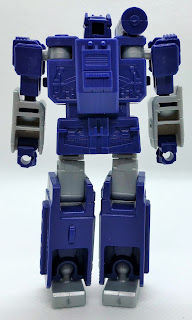 I've often heard of some of these Core Class figures referred to as "Mini Masterpieces" and while I understand that term being thrown around, let's hold our horses a bit. The level of detail, articulation and paint applications on Soundwave here is very impressive. In a lot of ways this figure does look like a smaller version of it's Masterpiece version, more so than a smaller version of the G1 toy.
Thanks to the ball joints in the arms, hips and feet, you have a great deal of range of motion of the limbs. The sculpting is fantastic, from the iconic head sculpt down to the cassette buttons on his waist...this looks like the version of Soundwave that I grew up with. 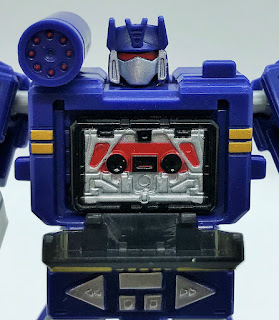 With a figure this small I wouldn't have been surprised if the cassette door didn't open, but thankfully the designers were able to keep this feature Soundwave is known for a part of the figure. A very small, non-transformable version if Laserbeak is included. The front side of the cassette features silver and red paint while the back is unpainted. Small touches like the cassette really help bring out the charm of the mold. 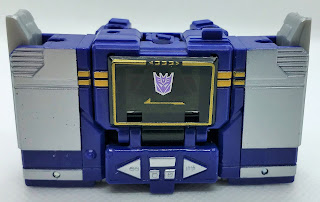 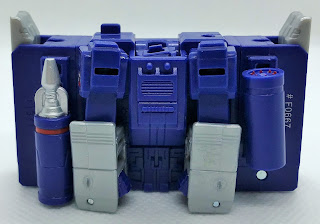 Soundwave never had a difficult transformation (at least in this form) and this figure is no different. In fact I was surprised at how close the transformation steps were to the original G1 toy. Now of course some liberties had to be taken, such as the feet and the weapon storage, but overall it's a very easy and straightforward transformation process. As you can see from the rear of the cassette recorder, Soundwave's weapons no longer fit inside the battery compartment. They now peg into the sides of the arms...which works in terms of practicality, but aesthetically doesn't look that great.
Overall I found this toy to be a lot of fun. I have always loved the old "basic" scale made popular by Beast Wars and subsequent lines, so it's nice to see this size still kicking. As of this post, the next series, Legacy, will be coming soon and it's already been leaked that the Core Class size will continue on. Now as great as this figure is, finding him at retail can and will be tough. If you ever have the opportunity to pick up Soundwave grab him...I highly doubt you'll be disappointed. 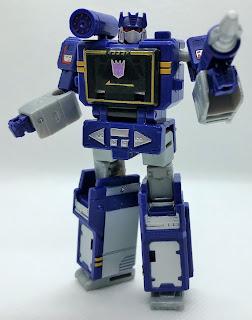 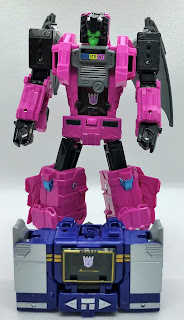