With so many things to collect these days I had to figure out a way to scale back my own collecting goals and for Marvel Legends that meant just sticking to Spider-Man characters and related villains. What I didn't expect however was for the supervillainess, White Rabbit to show up in a Spider-Man themed series. 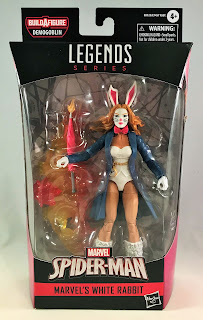 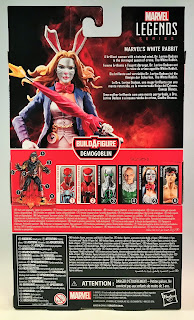 White Rabbit (Dr. Lorina Dodson) made her first appearance in Marvel Comics' Marvel Team-Up #131 (1983). She has popped up over the years as a B level villain in the New York crime syndicate. Personally I was thrilled she received a figure, even though I had already planned on buying since she also came packaged with Demogoblin's glider piece. 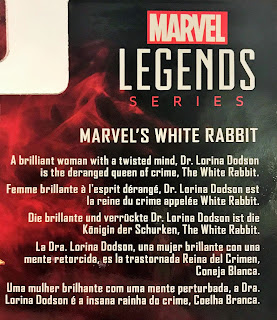 While I don't keep the packaging for these Marvel Legends figures, I do adore the beautiful renditions of the characters on the side of the packaging. The back of the box has a small bio for each character, bonus multi-language!

I love the overlook of this figure as I think the designers have captured her comic likeness. The body appears to be reused from the Typhoid Mary figure that was a part of the Monster Venom BAF wave. I don't know if the wooly looking boots or trench coat are reused pieces or new sculpts. 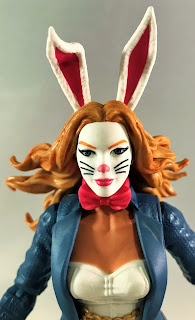 The paint apps on the figure are nicely done, especially on the  face. The sculpt of the rabbit ears and flowing dirty blonde hair are perfect. Her pink bowtie is a separate piece and can be moved and I imagine if you were to pop off her head the bow could be removed. 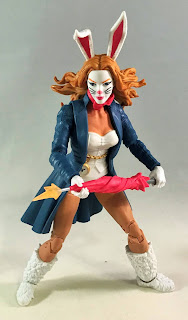 While I'm not the best at posing modern action figures, White Rabbit does come loaded with articulation that we've come to expect with Marvel Legends. I don't know if it's my specimen, but the legs seem to be slighted bowed right out of the package. You can tell if you spread out her legs/feet in a dynamic pose, but if you pull them together to make her stand straight up I think it's noticeable.

She comes with two accessories, a umbrella and a blast effect. Much like the Penguin in the Batman's world, White Rabbit's umbrella also doubles as a gun. The small, semi-translucent yellow blast effect fits nicely on the tip of the umbrella. 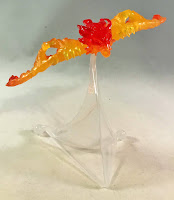 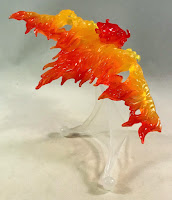 Being that White Rabbit is part of the Demogoblin Build-A-Figure wave, she is packaged with this awesome glider for the classic Spider-Man villain. I love that it also comes with a clear stand. Where was this piece when the earlier Green Goblin figure was released?!

Overall this is a great figure of a rather obscure villain. I know not everyone will care for her as she isn't a top tier character, but that's what so great about the Marvel Legends series is that they are starting to give lesser known characters the figure treatment.
at 11:32 AM