I don't remember where I first heard of 52Toys' series of transforming robots, BeastBOX, but after picking up my first one on Amazon I'm hooked. I still don't much about 52Toys, who they are, where are they based, etc., however their product seems to be being picked up by more and more retailers online. This is a good thing because these are great little "deskbots" for the office if nothing else. 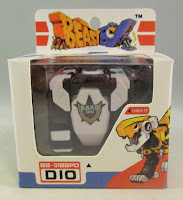 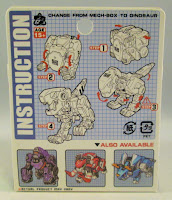 Dio is the first release in the series and this version is just one of many variations of the cute little velociraptor available. Dio comes in a small cube window box with a small box flap. The packaging has a matte feel and is rather simple. The back of the box contains the transformation instructions...which is just 4 steps, as well as small thumbnails of three other molds available (at that time). 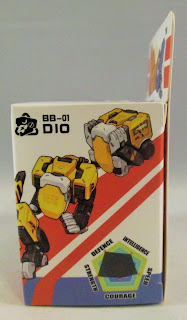 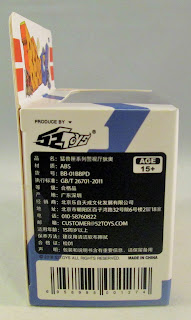 The sides of the box has a series of images of the figure going from the it's "box" mode to animal mode. The bottom right corner of the box has a hexagon shaped grid that shows Dio's traits. This is basically the same as a Transformers' Tech Specs.

The other side of the box has a lot of text which I can't read as well as the product's barcode.

I didn't really notice this insert inside the box behind the product until I opened the box. This removable cardboard "internal structure" insert is a very nice touch by 52Toys. 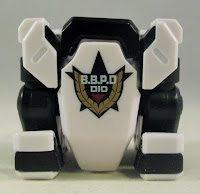 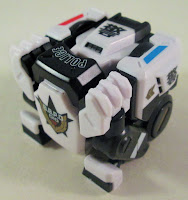 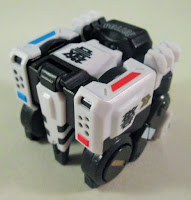 I know what you may be thinking. "What's so special about a robot that transforms into a box?". I said the same thing as a kid when I first saw Rock Lords on the shelves. However once I was given my first Rock Lord (Magmar...which I was immediately reminded of after opening Dio) I fell in love with the quirky toy. The same applies to BeastBox. There is just a charm about this toy that's hard to describe.

Dio forms a small box, or cube if you will that measures about two inches across either side. It's pretty amazing how the designers were able to engineer a velociraptor transforming into such a small package. In the box form you can see bits and pieces of the dino if you look carefully. I love the deco on this particular version of Dio, the black and white looks so great. Throw in the touches of red and blue, along with the various logos and this is one of the best looking versions of Dio released to date. Well at least in my opinion. 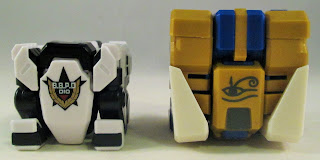 I only have a few BeastBOX figures thus far, but I'm 99.9% sure that the Dio mold is the smallest in the series. Here he is beside Elephinx, one I bought second hand to sate my curiosity. 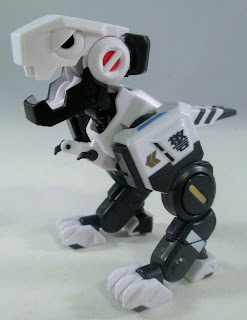 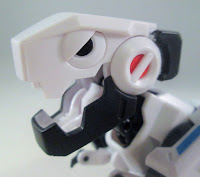 Transformation is just four steps and is really easy. Dio is more articulated than I would have imagined. While there isn't much to him, his hips are on ball joints, while the feet swivel (thanks to the transformation) giving the figure rocker like joints. The neck allows the head to be lifted or dropped, depending on how you want to pose him. The head can turn 360 degrees and the lower jaw can open and close. The tail simple moves up and down. Like a velioraptor, Dio has small arms with claws that fold out from his body. They are very tiny, but they do have a small range of movement.

The overall design and look of Dio is fantastic. I love the head sculpt, especially the eyes. It was until later that I noticed the other version of Dio I purchased had a different sculpted eyes. The whole figure is fun to mess around with. I told someone else that if I didn't work from home, Dio, or any other BeastBOX would be my new favorite "deskbot". To date there are a lot of different versions of this mold and while I'd love to own them all, some of them aren't the easiest to find online. There is also a new version 1.5 that is being released soon. This one appears to have a gun mounted on the dino's back. I'll definitely have to check that one out!

Dio runs anywhere from $12 to $18 USD at most online retailers. If you're interested and want to check one out head over to Amazon, BigBadToyStore or HLJ or Hobby Search.