Several weeks ago I ran across a thread in TFW2005's Junkion section advertising DiaRobo toys.  I contacted the owner of the thread via email as requested and waited for a response.  Finally my email was replied to.  Turns out he had much more than what he listed, including the first transforming playset for the series.  I wasn't able to swing the latter, but he did make me a great offer on one of the two new tanker trucks.  Cue DR-1002. 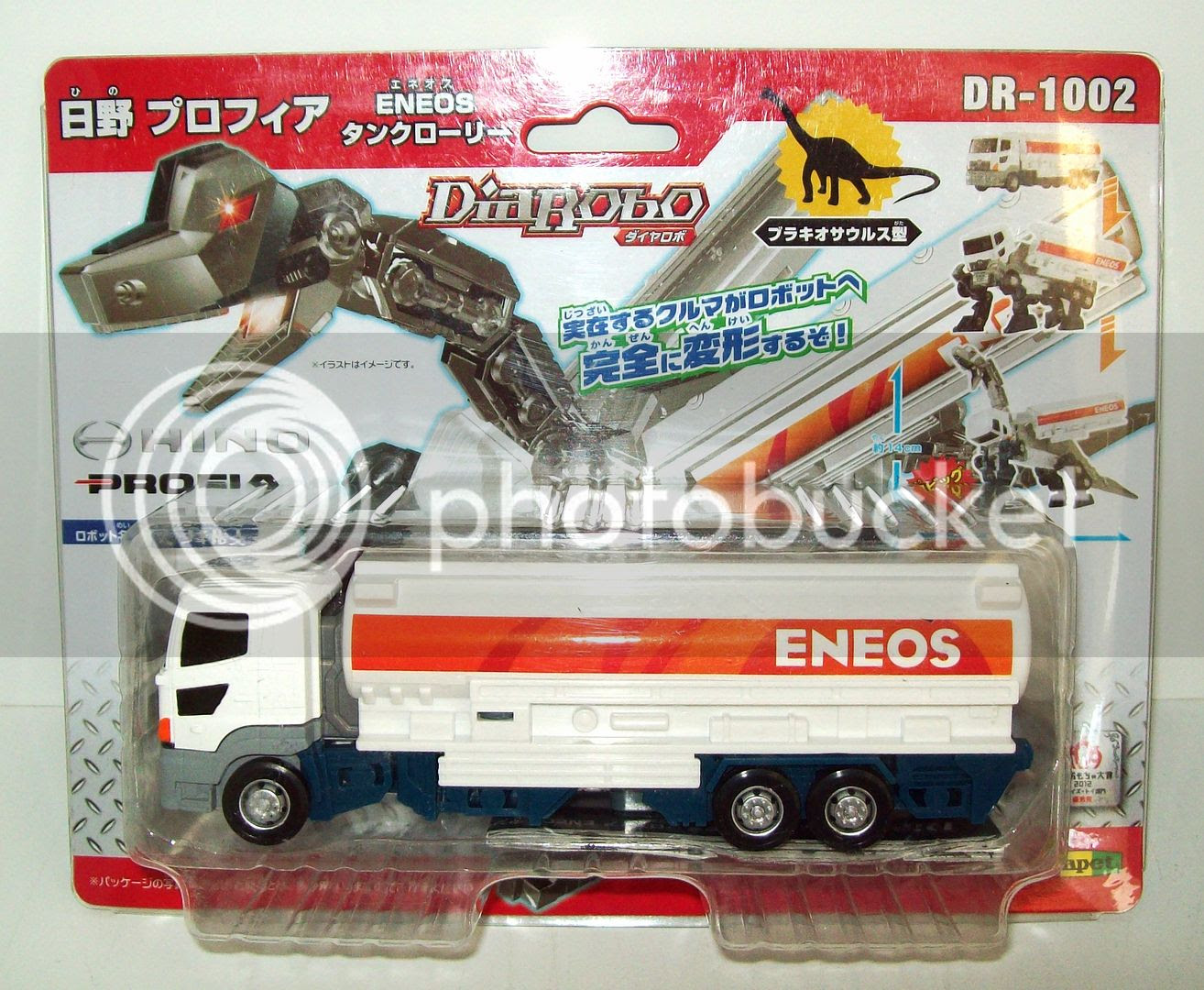 Ever since I first saw images of this toy online I knew I wanted it.  1) it's a big tanker truck and 2) it's a robotic dinosaur!  Unlike many of the other DiaRobo releases, I'm not sure if this one has an actual name or not.  I have him labeled as Hino Profia Eneos, but that isn't his name.

Turns out that Hino is a subsidiary of Toyota and in Japan they are one of the biggest manufacturers of industrial diesel trucks, buses and construction vehicles.  Profia is the model of cab over truck that was introduced in 2004.  Eneos is part of the Japanese company Nippon Oil. 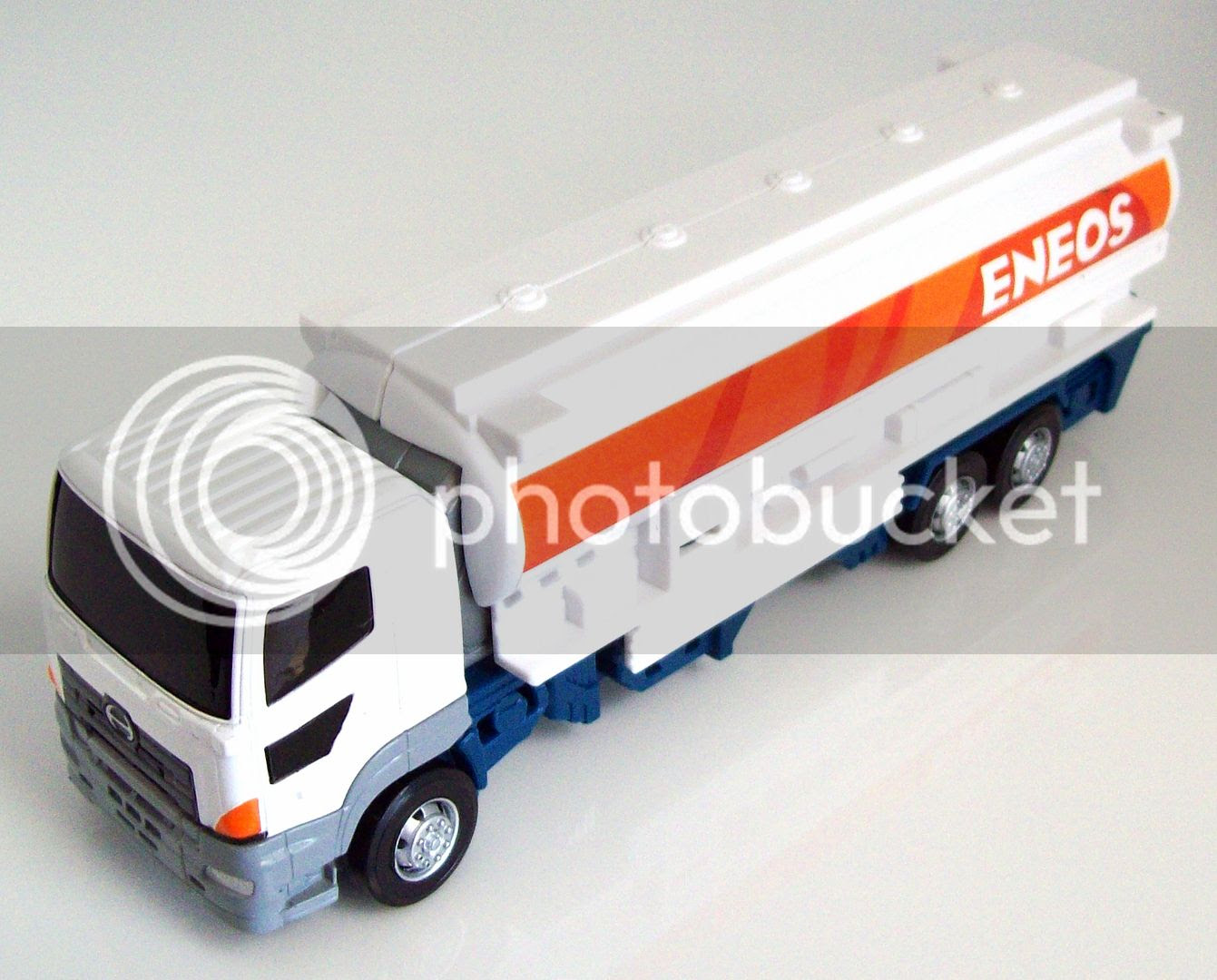 I really wasn't sure how large (or small) these tanker trucks would be, so I was pleasantly surprised when I opened the package for the first time.  The truck has some major heft and size.  Scroll down to the bottom for a few comparison pictures.

If you've handled any previous DiaRobo toys then you'll know the plastic used is fairly light, making the toys feel somewhat fragile.  Not in the case of DR-1002.  The toy has some heft and feels much more along the line of a Hot Wheels release, sans die-cast metal. 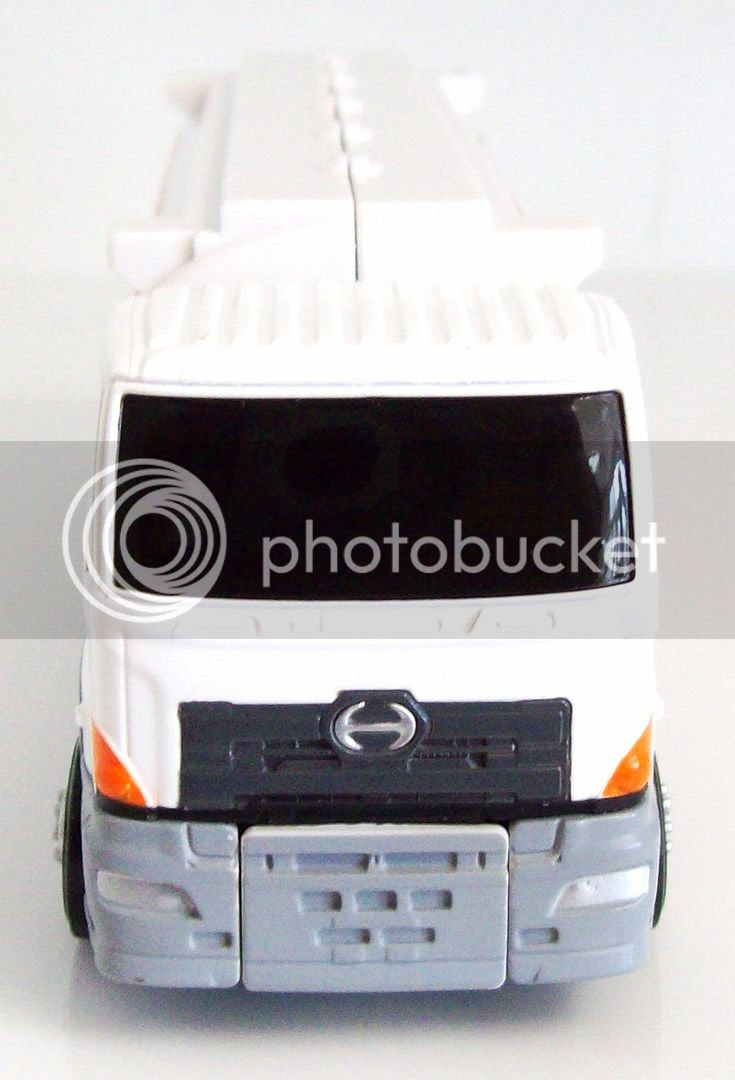 The front of the truck looks very much like many of the images that my Google search for 'Hino Profia' brought up.  Being an officially licensed release, Hino's logo can easily be seen on the front of the truck's grill.  The truck is molded in several colors which is limits how much paint was used.  One each side of the tranker truck are the only stickers, featuring the Eneos name and colors. 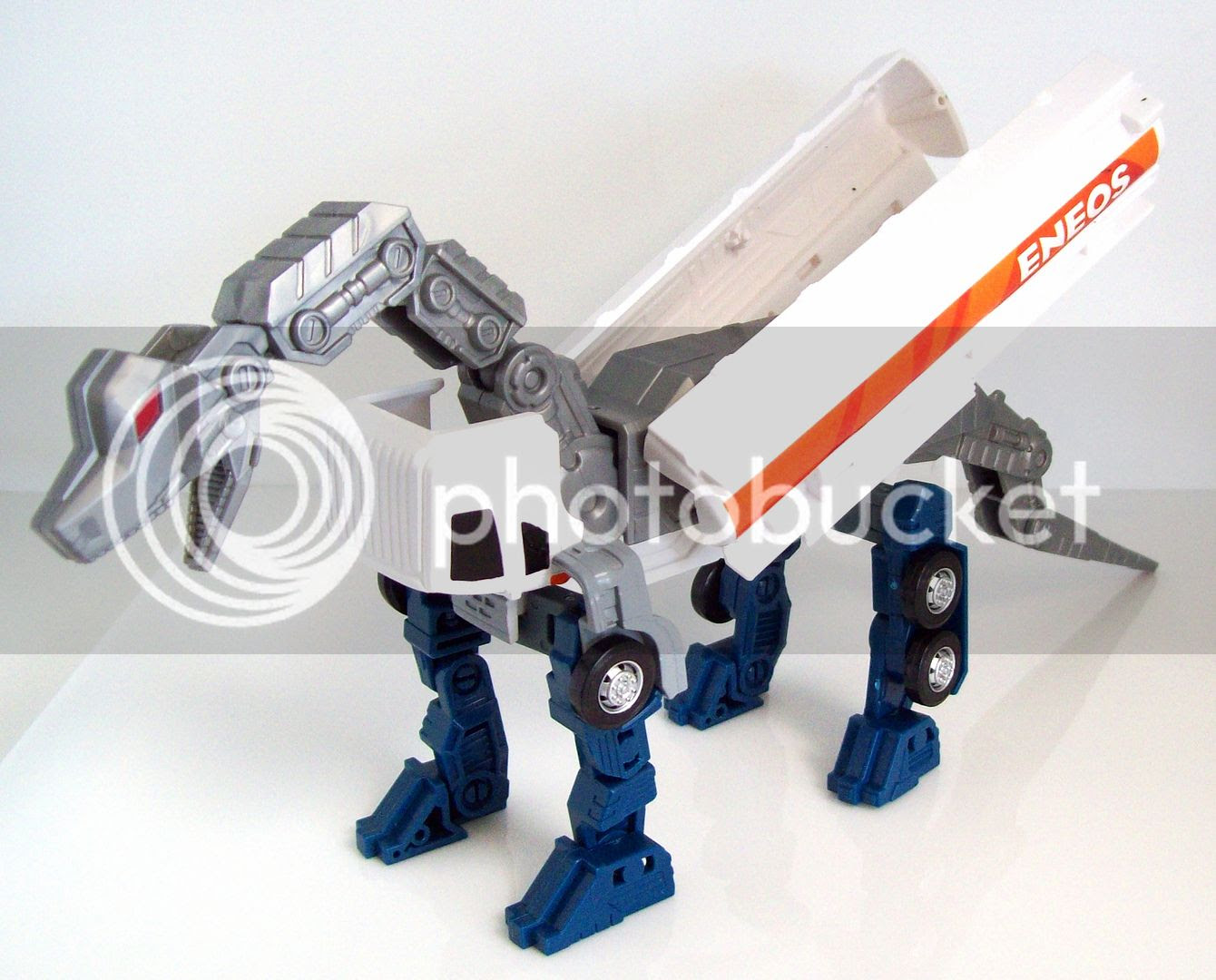 The transformation from truck to dino is rather ingenious.  First step is to pull apart the tanker halves.  These are connected via ball joint pegs.  The legs then fold out via a small hinge, then fold down as you see above.  The tail is folded up inside and simple unfolds.  Then you lift up the center gray portion to expose the dino head and neck.  Fold down the truck's cab and lift and pose the dino as you see fit. 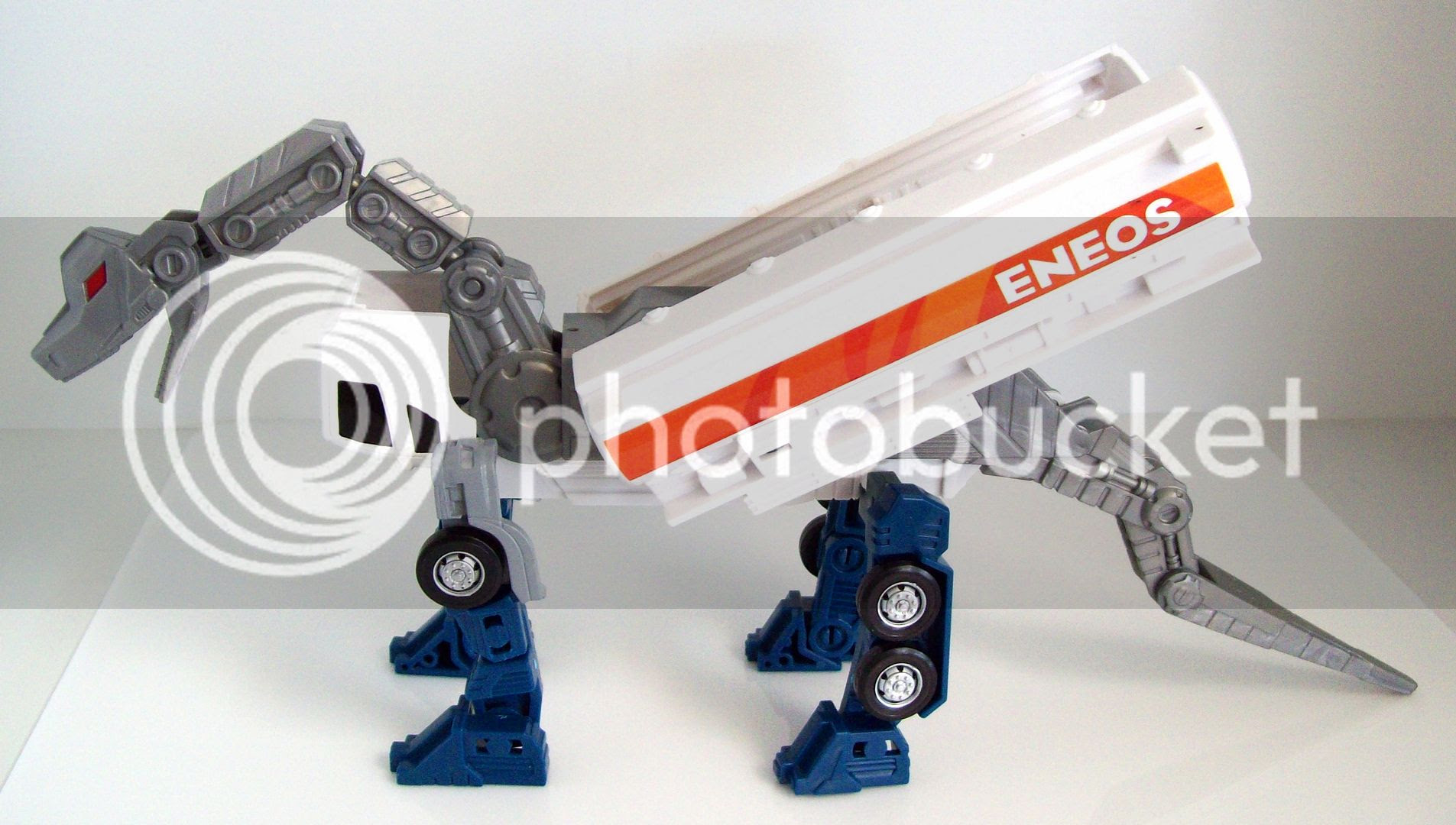 Now in my childhood we would probably call this dino a Brontasaurus.  However a lot has changed since I was wee little so I won't begin to try and label this dino now!  Let's just call him awesome, shall we? 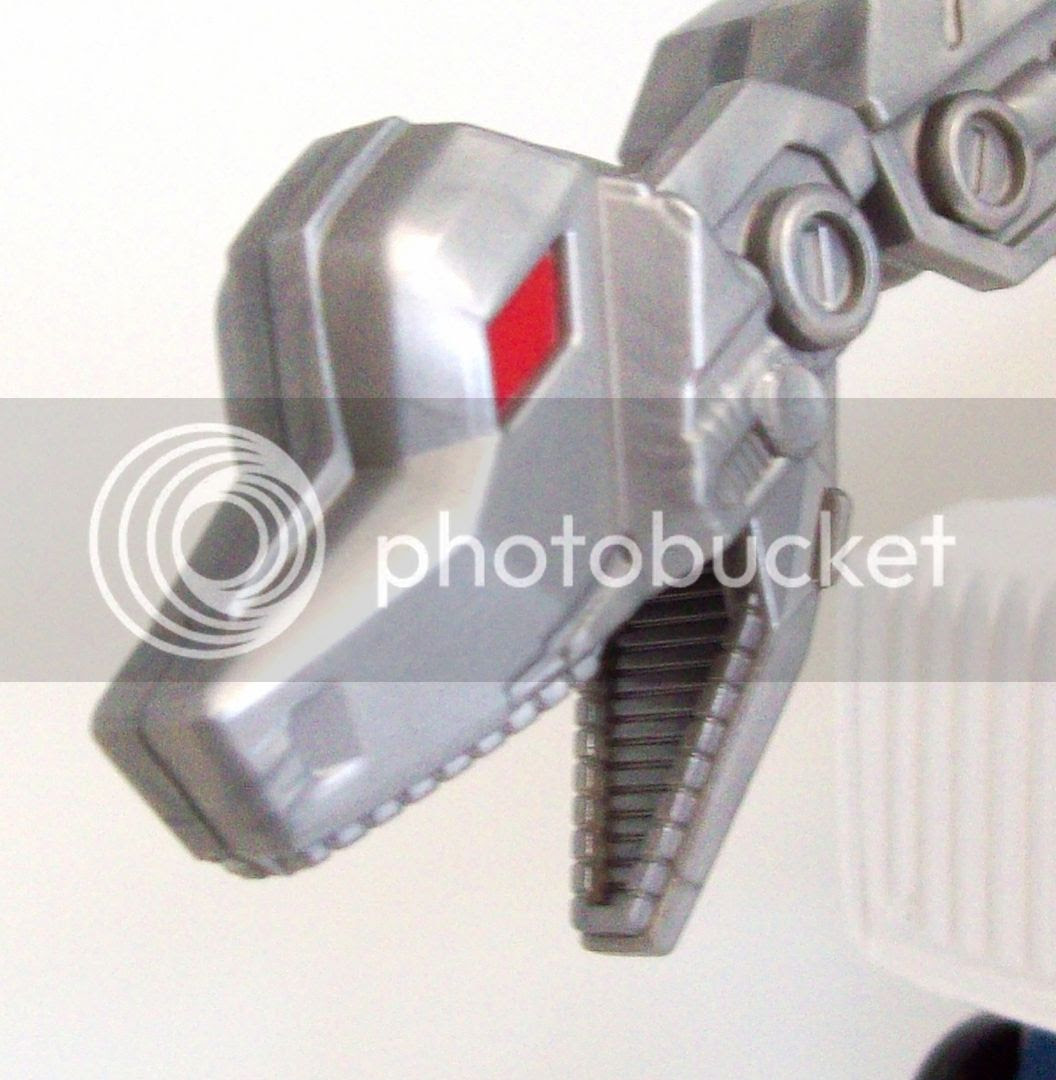 The eyes are painted red and the lower jaw easily opens and closes.  Being that the dino has flat teeth I'm guessing he's a herbivore.  The whole neck piece is comprised of individual pieces, each connected with nall joints.  This gives not only the head, but the entire neck some great articulation. I know this pose doesn't make sense, but he looks cool.  Seriously though, would you think a transforming tanker truck to dinosaur would be so articulated?  I didn't. 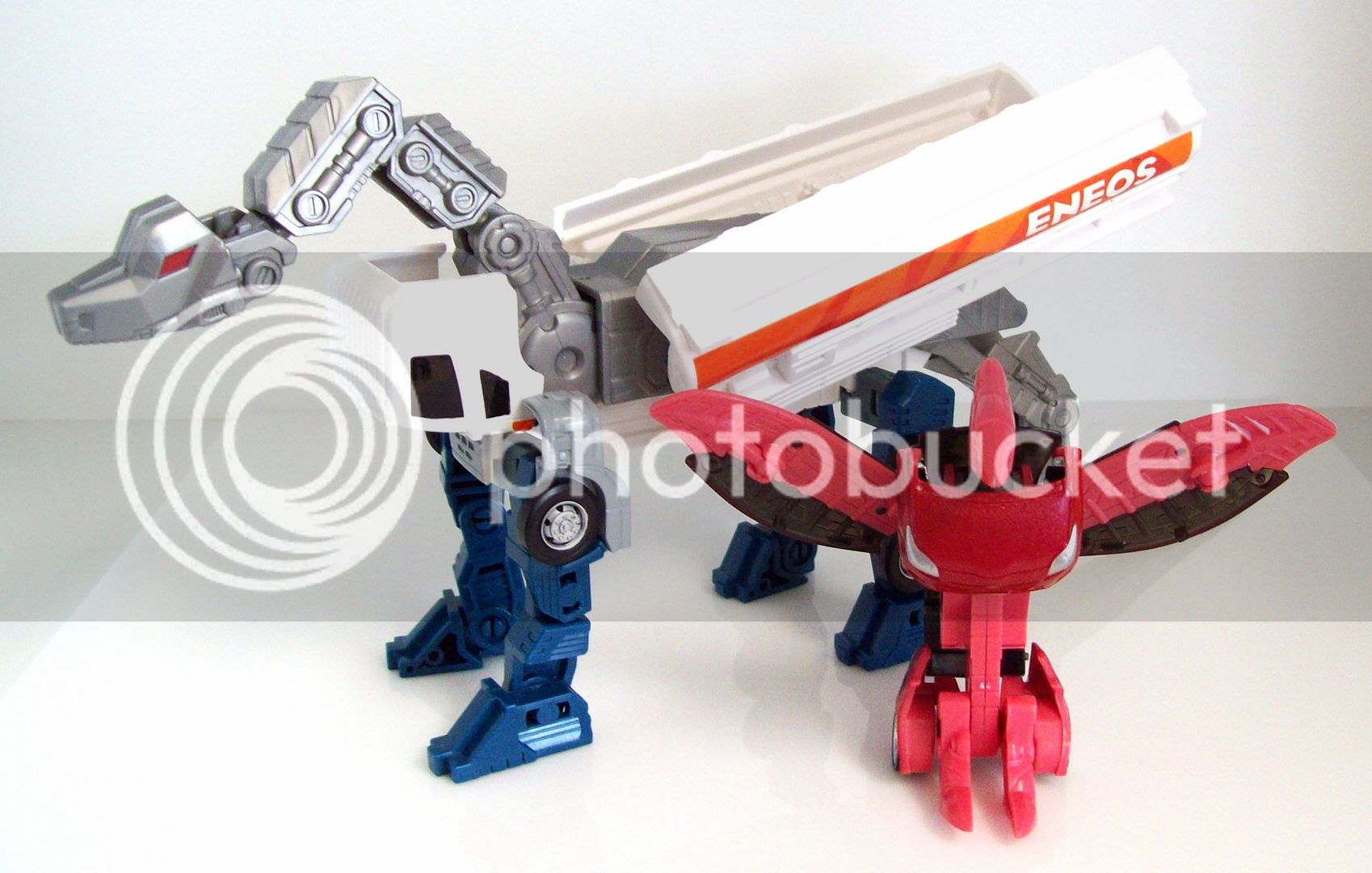 DR-1002 isn't the first dinosaur released in the DiaRobo series.  Priteradon DR-0008 was released earlier in the line.  It's alternate form is that of a Toyora Prius.  I've yet to do a proper review for this release, but one is in the works. 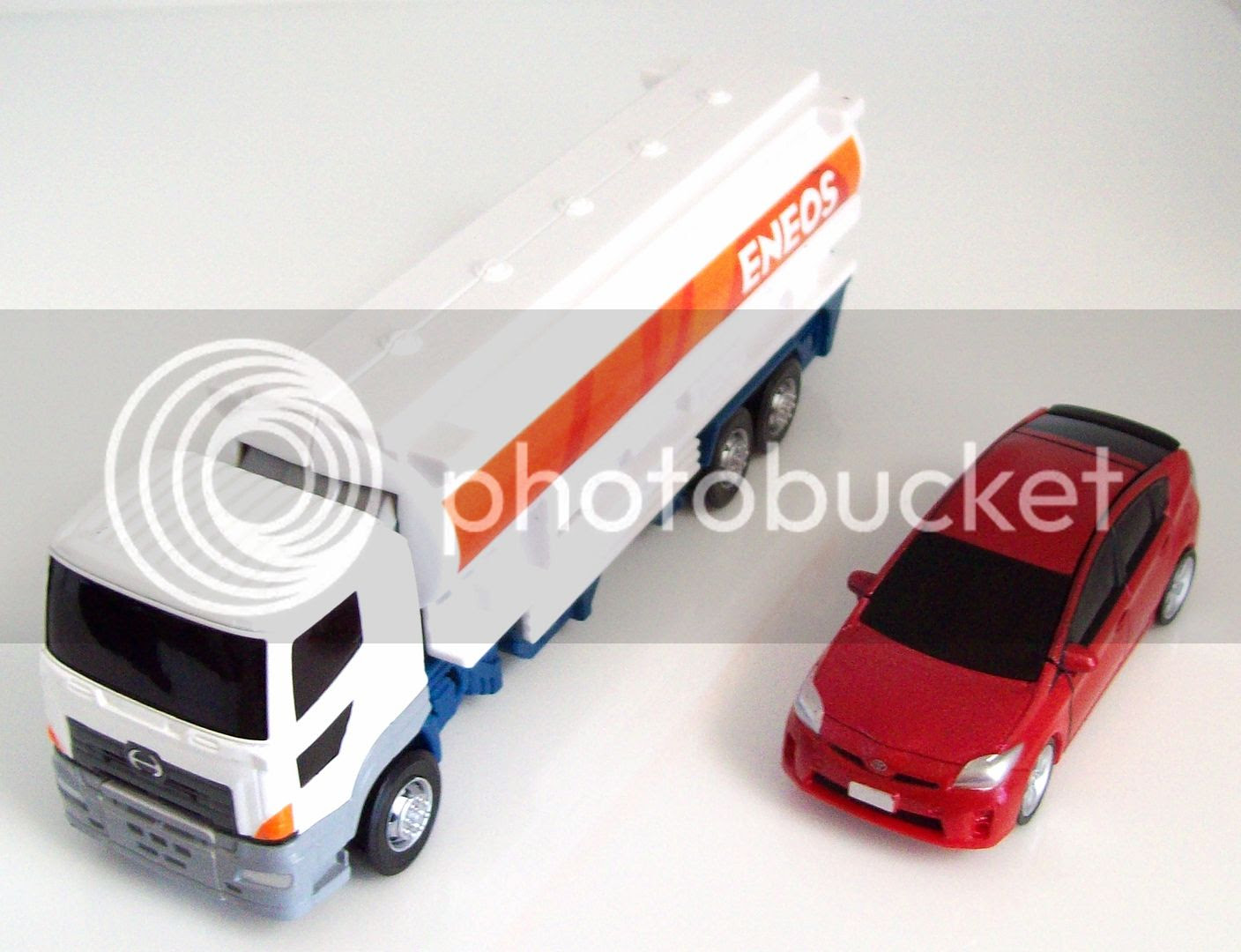 If you've been on the fence as to whether to import one of the DiaRobo toys or not, I can whole heartedly recommend DR-1002.  There is also a different colored release (DR-1001) that features a different truck shell.  He is high on my list after playing around with the Eneos truck.

Many online retailers offer the DiaRobo toys now, but I would be in the wrong if I didn't point you over to the great guy that supplied my sample.  He is currently working on a new web store, but for the time being you can visit his eBay store, The Agabyss.  Tell him flywheels from Random Toy Reviews sent ya!
at 3:46 PM