In 2005 a Japanese publisher released the definitive Machine Robo book simply called Machine Robo Wedge. The book featured lots of text (that unfortunately I can't read since it's all in Japanese) and lots of colorful pictures for Machine Robo toys that ranged from the beginning of the line through the then current Mugenbine line.

The book also came packaged with a region 2 DVD full of vintage Machine Robo commercials. I've only seen a few of these as I'm afraid to switch the region code on my laptop's CD-ROM drive too many times, but it was an excellent addition to the book. If you are a fan of any iteration of Machine Robo then I highly recommend you pick up this book. I believe at the time of this post HLJ still has it in stock at the time of this post.

Part of the book was some sort of contest for a special Mugenbine set called Quest Knight Wedge. Unfortunately I don't know much about the contest itself or how the toy was awarded or how many exist, but I did manage to run across one a few years ago and purchased it. I had completely forgot I even owned the toy as it never made it to one of my display shelves in my toy room and I only recently came across it buried in a box as I was moving. While I still love the Mugenbine toys my collection focus has changed so the toy wasn't a fixture in my collection. I did find a fellow collector to sell the set to and I'm happy it's going to a good home. Before I let it go however I had to open him for a quick review. 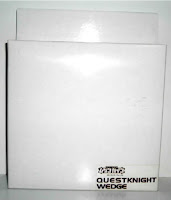 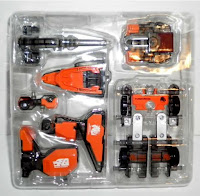 Quest Knight comes packaged in a plain white box with only a sticker letting you know which character is hiding inside. My Lucky Draw Carry Eagle came in a similar box. Slide the inner plastic tray out and you'll see the Turboroid and his Bineparts all laid out. Quest Knight Wedge is (obviously) a recolor of the regular Quest Knight figure. I believe he was one of three released that first used the new Turboroid figure as the base. The translucent smoke colored plastic combined with the orange and silver paint apps are beautiful. In some ways it looks better than the regular red version. 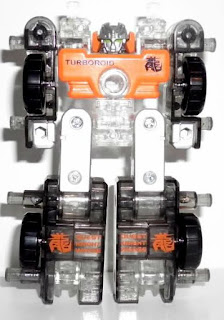 The Turboroid figures featured the same articulation and close to the same style that the "regular" Mugenroid figure had - only with wheels! This allowed the figure to convert to a vehicle of some sort with the attachment of other Bineparts. 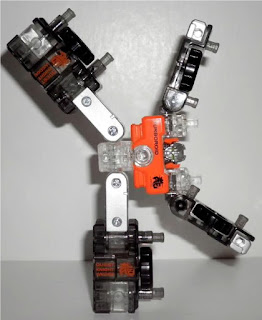 Not the greatest range of motion and articulation, but the combinations can be endless. Quest Knight Wedge has 3 different combined modes. The first is his beast mode - a dragon. Because this version is recolored from the original I have to say the dragon doesn't look as good being mostly translucent. The original featured a vibrant red plastic with white and gold paint apps. The toy still looks great in this mode however. Take a look. 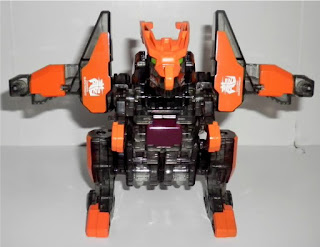 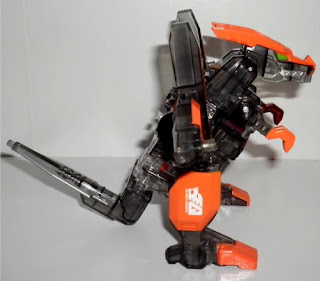 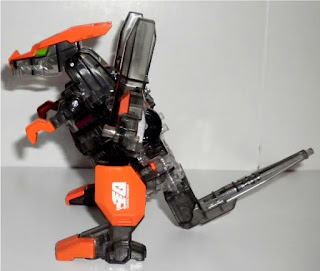 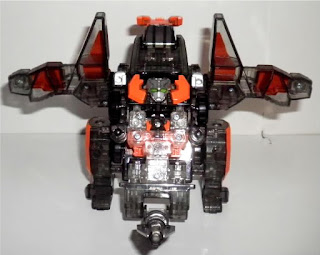 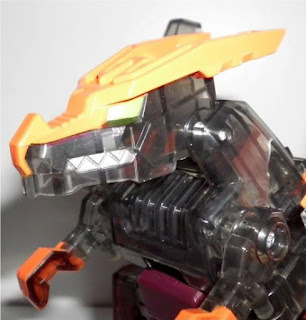 I should mention that the dragon's tail is comprised of a sword so it's rather thin. On the dragon's back you can also see the combined robot's head exposed which is a major drawback.

The second mode utilizes the Turboroid's vehicle form. Again without having the original red color you may not look at the vehicle form and immediately recognize that it's a fire truck of sorts. The rest of the included Bineparts form some sort of base if you will. None of the these Mugenbine Turboroid sets had very convincing structures if you ask me. I'll just call this thing a makeshift fire house. 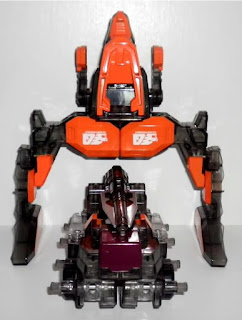 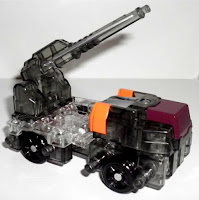 Is the dragon tail / sword a large fire hose or a ladder? You tell me! While the construct may be lacking the fire truck mode is actually pretty good. You basically just lay the Turboroid face down and snap on 3 pieces and wa-la you have a fire truck!

The last of the combined modes is a robot. I should also mention that Quest Knight can also form a larger robot with two other Turboroid sets (Razor Ninja & Save Gunman). Quest Knight's combined robot mode stands at 3 inches or so. It's not small, but it's not the size of a Transformers combiner either. The robot can wield the dragon's tail in either hand. You can rotate the arms out, but that's about all the articulation in this mode that you'll get. 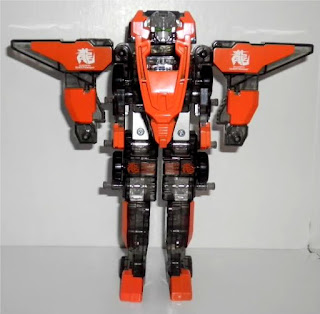 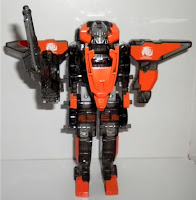 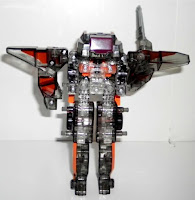 The head sculpt is excellent and the bright orange really pops on the translucent smoke colored plastic. This is a great set and has a lot of great parts. I was immediately reminded of why I was so attracted to these Mugenbine sets in the mid 2000's after taking these pictures. Part of me wishes I had more room for these toys as I would've loved to have kept my set as I had nearly the entire Mugenbine line. I doubt you'll run across this Wedge version, but if you can find the regular issue Quest Knight set pick it up. If you can find the other related sets and you have a good imagination you'll be able to pull off some great combinations.
at 3:38 PM