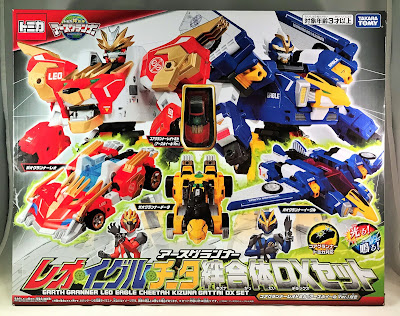 January 2020 I saw a pre-order for the first wave of Tomica Earth Granner toys, including this Kizuna Gattai DX set. I had loosely been following some of the previous Tomica series of toys, but while those focused on a rescue and emergency themes, I could tell Earth Granner was going to be different. I've never cared for Power Rangers, but that did cross my mind when I first saw these toys. After seeing a clip from the upcoming animated show I was intrigued enough to seek out a pre-order. 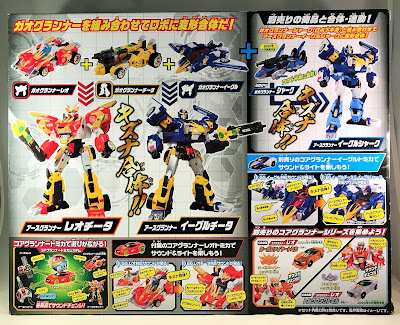 This set contains toys of Gao Granner Leo, Gao Granner Cheetah and Gao Granner Eagle, along with a special edition Core Granner vehicle (dubbed the Earth Wheel version). All of these toys (sans the special Core Granner) were made available individually, but at the time I coud pick up the DX set for less than purchasing the 3 toys separately.

When the giftset finally arrived in the mail I was floored by the size of the packaging. In typical Takara Tomy fashion, the packaging is top notch and well laid out. The back of the box gives you an idea of what the 3 toys are capable of. On the left side of the box you can see how all three toys interact. The right side of the box previews the next figure to be released in the series, Gao Granner Shark. 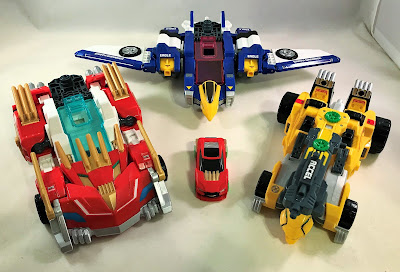 Inside the large giftset are all 3 vehicles, from left to right:
Gao Granner Leo, Gao Granner Eagle and Gao Granner Cheetah
The story of Gao Granner: Earth Energy is a force generated naturally by the Earth's rotation. A mysterious alien enemy from space know as "Dark Spinner" has invaded Earth in order to steal the Earth Energy and transform it into Dark Energy. The only ones who can stand up to stop them are twin brothers named Raiga and Kuga, who are fighting together with the Earth Defense Team, Earth Granner.
In typical Japanese fashion, the two brothers are young kids who just happen the be the key to the Earth's survival. Raiga pilots Geo Granner Leo while Kuga pilots Gao Granner Eagle. The Core Granner vehicle can merge with either of Leo or Eagle to combine with Cheetah (or Shark) to form a large robot. The premises is quite simple and very cool at the same time. 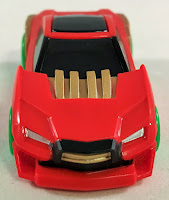 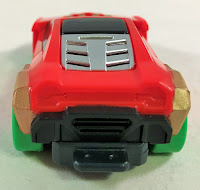 The Core Granner vehicle is your average size Tomica vehicle (or think Hot Wheels or Matchbox), yet there are electronic lights and sounds built into the figure that activate when the Core Granner interacts with one of the larger toys. I'm not sure if the sounds in this version of the Core Granner vehicle are different from the regular version that was sold separately, but you can see the wheels are cast in a bright green versus black.
When the top of the car is depressed it activates the electronic lights and sound. Leo's logo is displayed on the windshield of the vehicle and depending on how many times the button is pressed it will play a different phrase or sound. 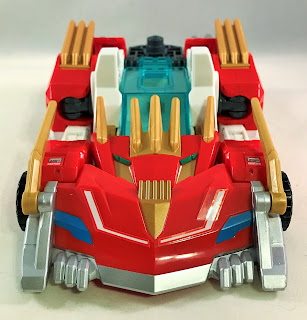 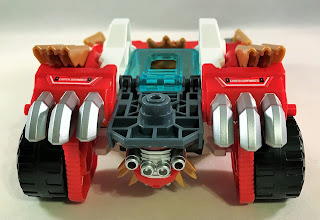 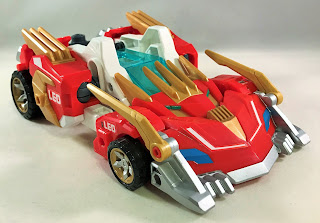 I have to say that Gao Granner Leo is pretty awesome. I wasn't sure what to expect when I started to unpack the vehicles, but once I removed Leo from the box I could tell the toy felt a lot like the previous Tomica toys I owned in the past. I love the red/white color scheme with the gold accents. In the center of the vehicle you'll see a translucent blue canopy, this is where the Core Granner vehicle can be inserted. 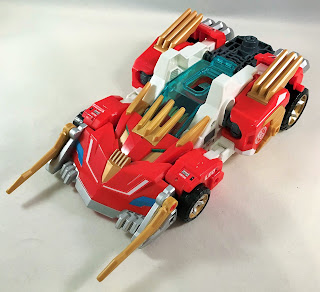 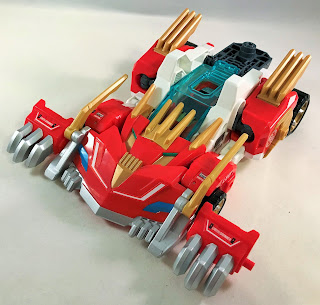 The large gold daggers on each side on the front of the vehicle can pivot forward for attack mode. Conversely, the large claws that normally cover the rear wheels can be attached to the sides of the front. 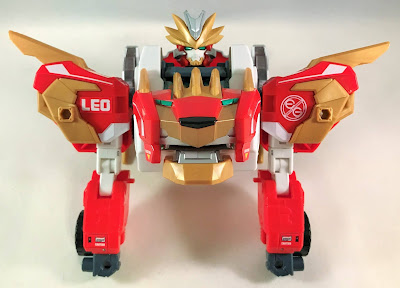 Gao Granner Leo transforms to form the top half of Earth Granner Lio Cheetah. Here you can really see the lion motif of Leo. As I started to form the combiner robot I knew that I was going to like this series. Next up is Gao Granner Cheetah. 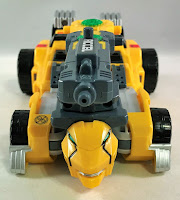 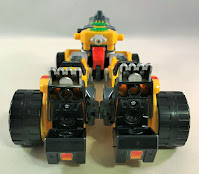 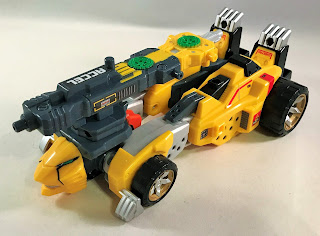 Gao Granner Cheetah is not nearly as impressive as Gao Granner Leo. The Cheetah motif is a little more obvious, but if you look at the vehicle close enough you can see it's basically just a set of legs with wheels. Cheetah does hold the combiner's large sword and sheath however on what is essentially the engine block. 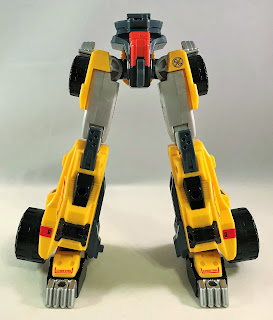 Cheetah's conversion to a pair of robot pants is rather simple and straight forward. As a stand alone vehicle the toy is rather unimpressive, but you wouldn't buy Cheetah if you didn't have Gao Granner Leo or Eagle. 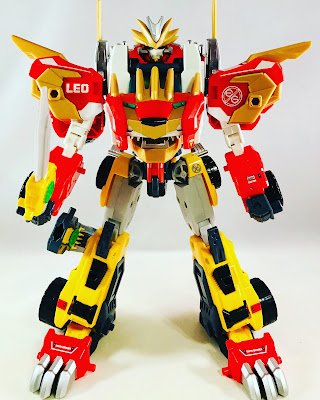 OK, now we're talking! Once you get Gao Granner Leo and Cheetah combined together you can see just how these two are mean to be one. The sword's sheath can be wield in hand or attached to either side of the legs. The level of articulation in combined mode is quite impressive with a wide range of motion in the shoulders, elbows, hips, needs and feet...all courtesy of satisfying ratcheting joints. 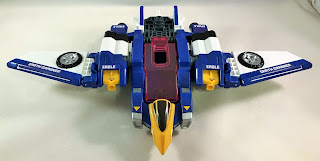 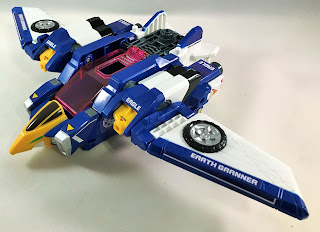 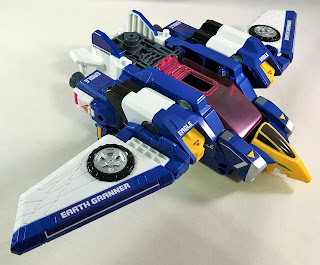 I found Gao Granner Eagle to be really impressive, perhaps the best vehicle of the trio in the giftset. The eagle themed sculpting is nicely done, yet the wheels that are integrated into the wings prove no real use...unless they they are meant to double as turbines as part of a VTOL system. In the rear of the vehicle you have two small jet engines. I the center is a translucent pink canopy for the area that houses the Core Granner vehicle. Just in front of the canopy is the eagle head that is painted to look a lot like the canopy of a jet.

The eagle claws that are normally underneath the vehicle can be removed and attached underside of each wing. Whether these are used as claws or a type of weapon (missile pods?) I'm unsure as I've only watched a few episodes of the anime. 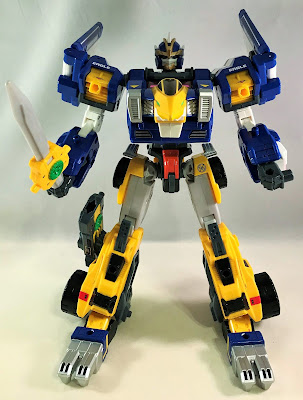 Once combined with Gao Granner Cheetah you've got another impressive combined robot. Being that Eagle already as yellow accents he looks pretty good with Cheetah attached. I didn't think I would care for this combination after I had Leo and Cheetah combined, but as nice as these two look together Eagle's combination partner was meant to be Gao Granner Shark. Originally he wouldn't be released until about 2 months later. Shark would go on to sell out pretty quickly (at least the individual release) and it would be quote some time before I was able to get my hands on him. Check back for a review on Shark and how he integrates with Eagle.
I had a lot of fun with these 3 toys. Since I picked up the gift set there have been a few other releases in the series and they look just as good, if not a little better. This is one of those series that if I had more money and display space I'd probably pick up more in the series, but if you only can pick up one set either one of these pairings are recommended. 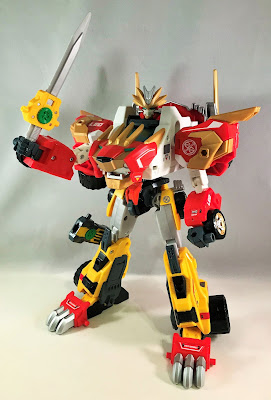 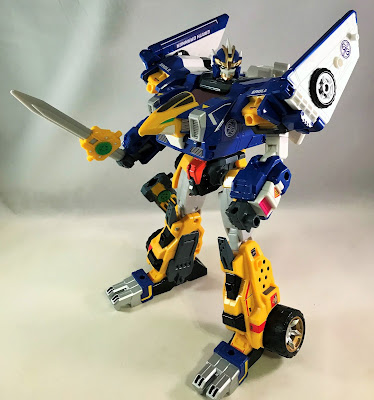