Alter Nation is a new series of action figures based on an original IP from Panda Mony Toys. In today's world of licensed action figures this is a breath of fresh air. The line debuted at 2019 SDCC and since I first learned about the series I was intrigued as what I saw re-ignited some nostalgic memories of toys I played with in my childhood.


Off the coast of California, at a secluded Naval base on San Nicolas Island, the GK Delta Special Forces team was created in a top secret government experiment. It's object: to create the perfect soldier by blending human and animal genetic abilities...

Follow the adventures of GK Delta as they uncover the top-secret generation Kymera conspiracy while questioning their duty to a human society that fears them with Alter Nation toys!

The initial line up is comprised of 6 figures, 5 heroes and 1 villain. The figures come in two different size and price points, varying from around 5 inches / $21.99 MSRP and 6 inches / $24.99 MSRP. You can order the figures directly from Panda Mony Toys or from other etailers such as BBTS.

The first Alter Nation figure that I've been able to get my hands on is the villain from phase 1, Sabotage. 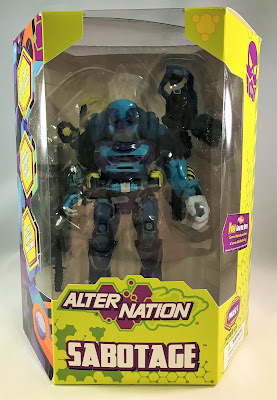 The packaging on these figures are freaking awesome! The box is a hexagon shape (for the geometry challenged, that's a 6 sided box!) and is so colorful. If these were on retail shelves at Target or Walmart they would easily stand out because of the shape and bright colors used. The large window allows you to see the figure and all of it's accessories packaged inside. 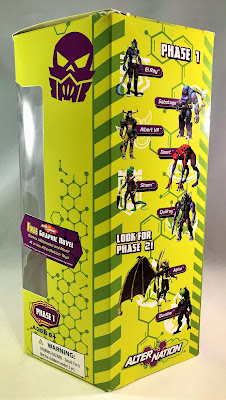 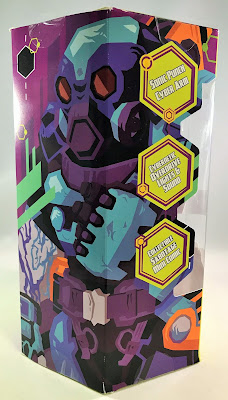 The front left panel includes a blurb that a small graphic novel is included inside the box. We'll look at in more depth in a bit. The right left panel displays the other characters offered in Phase 1 along with two figures coming in Phase 2.

The two panels on the right side of the box features a large, colorful art of the character (Sabotage) along with 3 small yellow hexagons that list the features of the toy, such as "Sonic Punch Cyber Arm", "Cybernetic Overdrive Lights & Sound" and "Collectible Sabotage Mini Comic". 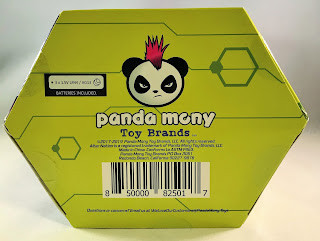 The bottom of the box features the Panda Mony logo (which is pretty awesome in my opinion), along with their contact info and a barcode. It also lists the battery info for the included batteries. 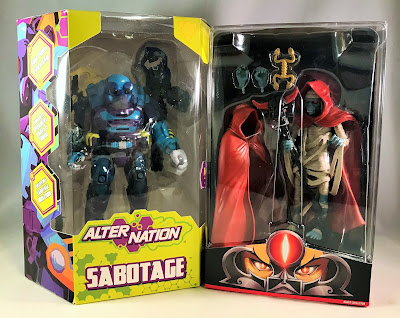 The closest packaged action figure I had near by when I took the photos was this Thundercats Classics Mumm-Ra. The two packages are nearly the same height and width, but because of the hexagon shape the Alter Nation box is much deeper.

I know some people don't care about toy packaging, but I do and I felt this awesome packaging deserved a little attention. Sure it may drive up the cost of the figure by a few dollars, but I'm telling you this packaging is a work of art and you can tell a lot of hard work and thought went into it. 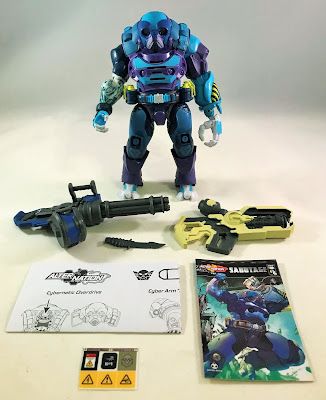 There is a lot of stuff crammed in the box and once freed from the plastic insert this is what you have. Sabotage comes with two large guns (a mini gun and a rifle), a combat knife, mini comic, instruction and sticker sheets. 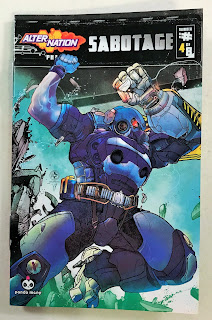 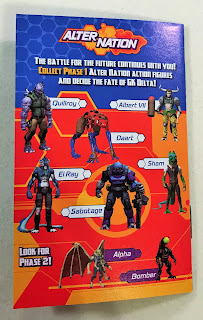 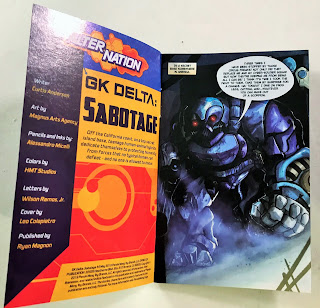 The included mini comic was so much nicer than I imagined it would be. The paper quality is very nice and the book contains multiple pages, held together by a stapled spine. The story is written by Curtis Anderson with some beautiful artwork by Magnus Arts Agency. While I'm not familiar with either of these creators, I am impressed with what I read and viewed.

I should also mention that Panda Mony Toys has entered an agreement with Dark Horse Comics to produce a comic book mini series for the brand. You can read more about that here. 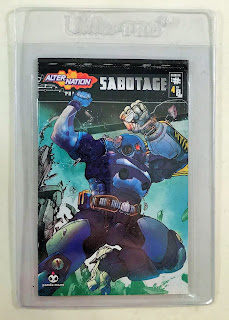 As I was looking at the comic the other day I thought it looked strangely the same size as a traditional trading card. Being a trading card enthusiast that I am, I grabbed a Ultra Pro flat rigid sleeve and the comic fit inside perfectly. I was even able to slide the comic into a penny sleeve...though a portion of the comic stuck out the top of the sleeve.

I've not seen any other reviewer point this out and whether or not its of any interest to others, this again was a little touch that I found to be very pleasing. 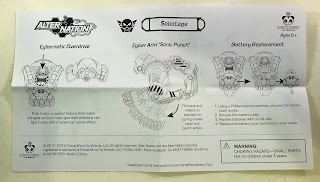 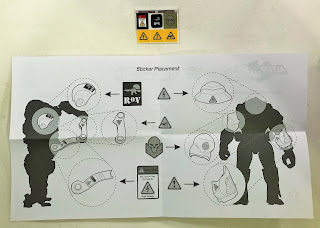 The included instructions are folded into quarters. The front side shows off the figures' action features while the back side hows you were the included stickers should be applied. I'm not sure if I'm going to apply the stickers, but they do add some nice detail...especially to his cybernetic arm. 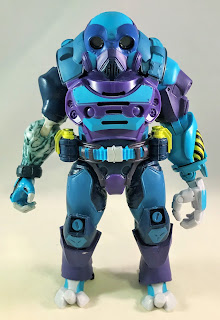 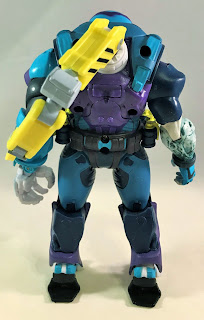 Enough with the packaging and inserts, let's get to the figure itself...Sabotage! This figure is big and hefty and very satisfying. He measures about 6 1/2 inches tall. The teal and purple colors used on the figure are a great match. The yellow that is used on the back of the cybernetic arm as well as on the grenades that are molded on his belt really pops and looks great as well.

On his back you'll notice a battery compartment in the center, along with a button just above. This button actives his electric lights and sound. 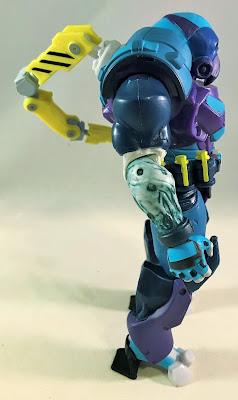 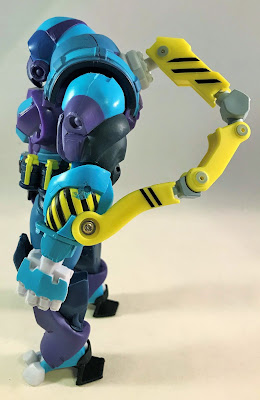 The only exposed portion of Sabotage is the lower portion of his right arm. His skin appears to be burned and has a greenish-blue hue. The paint apps used on this exposed flesh is awesome looking, with a gradient fade. His hand is molded in a way to allow him to wield his weapons with a decent grip.

His cybernetic arm is much larger with a robotic hand. Attached to his forearm is a long yellow apparatus that is attached to the top center of his back.

This arm features a pull back action feature that when pulled back will spring forward with a punching motion. Because of this gimmick, his left arm does rest in an extended form unless you tuck the arm behind a part of his leg or utility belt.

With all of the electronics built inside the figure, the articulation is limited, however there are still multiple points of articulation to appease the hardcore action figure enthusiasts and collectors. The right arm can rotate a full 360 degrees with a hinge joint in the elbow. The wrist has the same type of joint as the shoulder, allowing it to bend back and forth and rotate 360 degrees. His left arm is a little more limited due to the attached apparatus, however you can still bend the arm out to his side. A hinge joint is used for the elbow and the hand is like the other.

There isn't any articulation in the head, no ab crunch or waist swivel due again to the electronics inside. His legs are attached with ball joints to a T shape piece in the waist. This allows a good range of movement in the legs, however due to the sculpting of the armor you're not able to pull off a sitting pose. The feet are on hinges that allow them to be moved up and down, but sadly there aren't any ankle pivot joints.

Perhaps it was just my specimen, but I felt like the legs started to get a little floppy the more and more I tried to pose him. I haven't tried to remove the leg, but I would imagine if you could then one could apply some nail polish or even floor polish to help tighten up the joints where the legs attach to the waist. 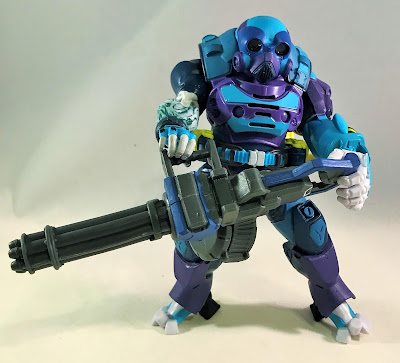 One of the two guns included with Sabotage is this large, gray mini gun. It took me a little bit of effort to get this gun in his hands, but I love the look once I got him to hold it. I'm not sure if you could pose him in a way where he was aiming this gun however. 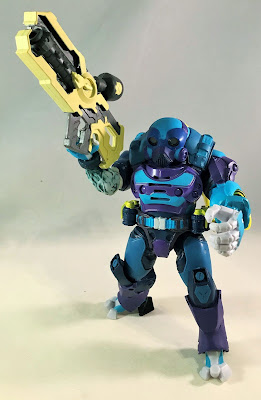 His other included gun is smaller and fits better in his right hand. The gun has a great sculpt and is two tone with yellow accents. On the top appears to be some sort of canister with a skull molded to the sides. 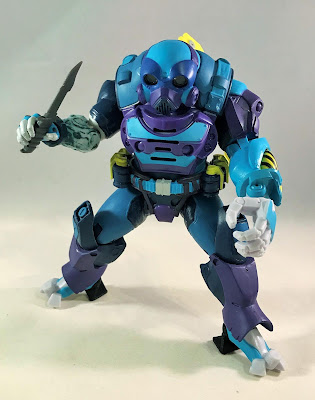 For those hand to hand combat situations Sabotage can also wield his combat knife. Be careful with this knife as the top point isn't all that blunt. This weapons has great sculpt as the one edge of the blade is serrated. 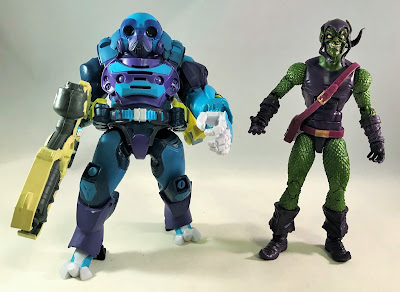 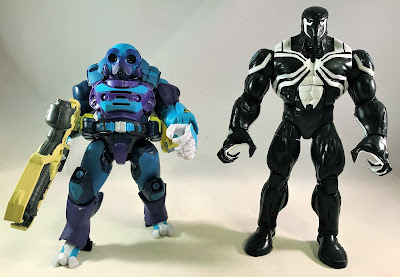 Comparison with a Marvel Legends Build-A-Figure

Overall I'm very pleased with what Panda Mony Toys has done here. First of all to create an entirely new IP and then create a line of action figures and toys is something that just isn't done (much) anymore. Then they create some great looking characters and pump out some great toys.

Sabotage isn't completely without it's flaws -  I mentioned I thought the legs got a little floppy the more I moved them, the figure is a little top heavy due to his cybernetic arm action feature and the electronics inside and his cybernetic hand doesn't want to wield weapons all that easily. However I strongly believe the positives of this figure far outweigh these negatives.

I am intrigued to see where this line of toys goes in the coming new year. I'm already excited about the winged villain, Alpha, that appears to be released in the 2nd phase. I hope people give this line a try because there seems to be a lot of good things going for it. Go ahead and drop by their store as all of the 1st phase of figures are available for purchase. 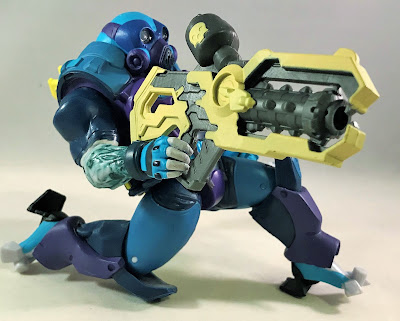