I honestly don't know much of the background on these toys other than they were released in the early 90's. It appears they were some of the last Machine Robo toys made. IMO these are some of the best MR toys, but can be hard to track down. I know they were released outside of Japan under the Robo Machine banner, but not sure which molds. Here is my feeble attempt at reviewing a few from my personal collection.

We'll start off with the packaging: 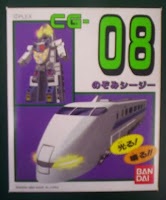 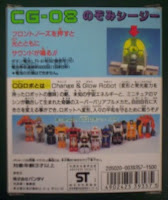 The packaging used has the same layout as CG-04's and box measures the same dimensions, 4 in. x 5 in. x 2 in.. Again a photo on the back highlights the lights and sound gimmick of the toy. This time being the lower portion of the train's front lights up when you press the button on the front bumper. I believe CG-08 was from the "2nd series" as you can see a much larger group shot of all the toys released in the line - 12 in all.


Next we'll look at the toy itself in robot mode: 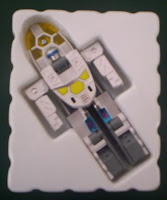 This time around the robot comes packaged in a white plastic tray. Nice overall design of the robot. Not much in the way of articulation, only the arms move. The legs just separate so there isn't any movement there at all. From the front it does scream that the alt. mode is that of a bullet train, but once you look at him from the side and back there is no hiding the alt. mode's form. The bottom lip if you will of the train's front flips down to form the robot's chest, revealing translucent yellow lights that light up when the button is pressed. There isn't much color to robot as all the plastic was either molded in white or gray. Thankfully the large chest sticker brings out some needed color (and adheres well too!).

This alt. mode sports a very simplistic, yet sleek design. The train itself is 4 1/2 inches long. The windows are painted black with the rest of the other colors/detail being stickers. There are black plastic free wheeling wheels underneath the toy, but to give it that more realistic look there are shiny silver stickers that give the train the appearance of having real train wheel assemblies. If you look on the bottom portion of the train's nose, you can see that the translucent yellow is one large strip. There is a gray sticker that is supposed to split up the yellow strip to give it the appearance of head lights I guess. The button that activates the lights and sound is just above the yellow light strip on the nose of the train. Unlike the tanker truck I reviewed early, this alt. mode does a fine job at concealing all of the robot parts.

Overall this is my favorite of the Change & Glow Machine Robos currently in my collection. I've always had a infinity for trains so when I came across this one a few years ago on Yahoo! Japan auctions I knew I had to have him. I believe I got him for a mere 800 yen, but haven't seen a packaged one for sale/auction since. The robot and train modes are equally well thought out and executed. Transformation is very simplistic, but that doesn't detract from the overall coolness of the toy. I would highly recommend this toy, even if you're not into Machine Robo or Go-Bots. Dare I say this is better than the Trainbots from Transformers?!
at 9:00 AM