If you grew up in the 80's and like transforming robots then chances are pretty good that you remember the Go-Bots brand. To many in that era they were the "poor man's Transformers". While Go-Bots may have not fared as well against the Transformers brand juggernaut in the U.S., the toys called Machine Robo in their native land of Japan had much better success.

In the mid 2000's Bandai attempted to bring back the Machine Robo name with a fresh new look and design called Machine Robo Rescue. The premise of the toys and the CGI/cel television show was the robots worked alongside humans (children) for the common good. There were 3 individual themes/teams represented including fire, police and construction. Each team had a leader robot if you will along with 4 identical drone like robots. Each team had the power to combine and form a larger combiner or gestalt robot. Occasionally their adventures lead them to do battle with an evil segment of robots called the Disasters.

The toys were sold in sets of 5. Red Wings, Blue Sirens and Yellow Gears were the first sets sold. Each team later branched out and had a another group of toys. Today's review of the 7th set released falls under the Yellow Gears themed set. 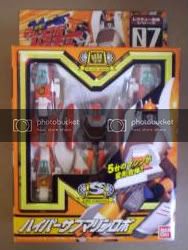 Each of the MR Rescue sets came packaged very similar to each other. The leader robot was positioned in the center with each drone around him. The drones are numbered 2 through 4 respectively. You can see the Yellow Gears logo in the top center of the packaging. 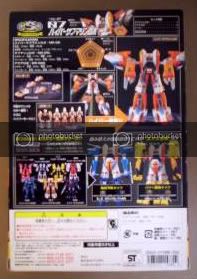 The back of the boxes are also very similar to each set as it shows the toys in both robot, vehicle and combined forms. On the bottom left side depicts other toys available. At the time of this release only 7 total sets were available. On the bottom right side you'll see that each leader robot is compatible with the drones from other sets. It's not shown on the packaging, but you can mix and match the drones even more, but the stability of the combined robot may be compromised as some of them can make the toy top heavy without the proper drones serving as legs/feet. 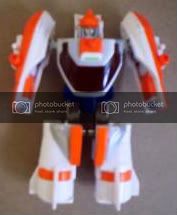 Submarine Robo (MR-06L) specializes in underwater rescues and is piloted by his Robo Master Shoh Ashikawa. Each leader toy is roughly the same size and shares a very simplistic transformation. I tried to include a close up of the robot's head, but the camera I was using couldn't pull off a clear enough picture. Each of the leader's head has a design sculpted into the head that resembles it's main function. In this case the robot has a small submarine "hat". Submarine Robo here stands at about 2 1/2 inches tall and is made of plastic with a little bit of die-cast metal used in the torso upper thigh area and shoulders. The only real articulation in robot mode is in the arms. Each arm is attached with a die-cast metal ball joint like mechanism allowing each arm a full range of motion. There isn't any articulation in the head, knees or legs however. Transformation into his submarine mode is rather simple. 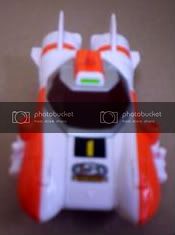 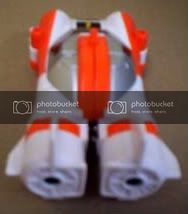 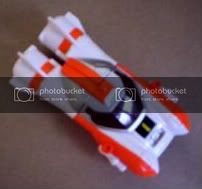 Lift up on the cockpit window section and rotate 180 degrees. Flip up the nose of the vehicle to cover the robot's head. Fold up each arm to form the front and sides of the submarine. Push each leg slightly in and up to form the rear. It's as simple as that. The submarine does have 4 small free rolling wheels on the underside and on a smooth surface it rolls quite well.

The drones are very simplistic and in my opinion look very odd in vehicle form. I say this because this set is based on the Blue Sirens #3 Police Robo set where the drones transform into motorcycles. The drones in this set look like motorcycles minus the wheels. It's a small complaint, but I felt should be brought up. Each drone is identical with the only exception being each one is numbered 2, 3 or 4. Each submarine drone has free rolling wheels on the bottom as well. The only articulation is in the arms and they can only rotate in a 360 degree motion. 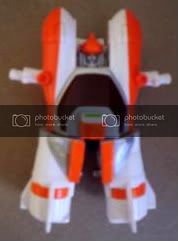 Combining all the toys to make the larger combined form is also very simple. Taking the leader figure in vehicle form you'll first loosen each arm to allow you to fold down the nose of the vehicle to expose the robot's head. Reattach each arm and the fold out the white pegs on each side. Separate the legs enough to allow a drone to be attached on each side. 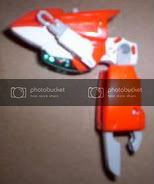 Each drone can be used to form an arm or leg - left or right - it doesn't matter. This was a nice touch as it allows a lot of different combinations if you own multiple different MRR sets. To form the arms take any of the 4 drones in vehicle form. Flip it upside down and then fold out the back of the craft down. On the end are 2 gray pieces that fold out to form the hands. The arm will then connect to the leader via the white peg and the hole in the middle section of the drone. 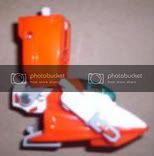 Forming the legs/feet is also very easy. From the vehicle form simply fold the rear of the craft up. Flip up the small white peg in the end as this will serve as the connecting peg. Fold down a gray piece in the back as this will act like a heal and help stabilize the combined robot. Plug the leg into the bottom of the leader robot. There you have the combined Submarine Robo toy. A few things you may notice in this combined form is the lack of a unique head and the overall size. Since each leader is basically controlling the drones this is more akin to putting on a suit of armor than transforming into a different or larger robot. If the toy was any bigger the small robot head would really look out of place, but in this case it works. I would like it if the head was a tad bigger, but I can live with it as is. The overall size isn't very big either. I apologize that I didn't include any size comparison pictures in this review. The robot stands rough at 5 1/2 inches tall. Since the toy is basically all plastic its very light weight. Submarine Robo has a few points of articulation in this form. The arms rotate up and down and ever so slightly from side to side. The claws are positionable as well. The legs also move ever so slightly from side to side, but not really enough that allows any dynamic poses. These may be mid 2000 grade toys, but the engineering is very 80's so don't purchase one thinking Transformers type articulation.

I personally love the Machine Robo Rescue line of toys. It's rather small as only a handful of sets were released. There are larger transport toys for each theme that are very cool and are worth seeking out. I own 2 of the 3 and I aim to post a review in the near future. With these toys being marketed for Japan and in some Asian regions finding them in the U.S. (or anywhere outside the West) can be difficult. I just recently purchased Submarine Robo as I drug my feet buying a lot of these toys when the likes of BigBadToyStore had them readily in stock so I ended up importing this toy via a proxy service company and spending way too much. I'm glad I was able to add this toy to my growing MRR collection, but unless you can find them for under $30.00 a set (excluding the transports) you may be better off saving your money. They are fun toys and if you own other sets in the series there are a lot of combinations awaiting your discovery.
at 5:54 PM