Have you ever been walking the toy department of your local retail store not being able to find what you were specially looking for, but had an itch to buy something anyhow? Well that's the basic story behind today's post.

While I purchased and reviewed past Halo sets under the Mega Bloks banner, I really can't say I pay a lot attention to them and I definitely don't collect them. I guess you could call me casual fan at best. My local Walmart (still to this date) had tons of trays containing this particular wave of blind packaged mini-figures. I took a look at the package and though "why the heck not". 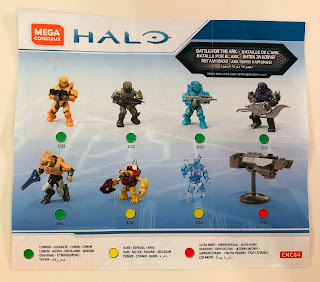 There are 7 different figures and one mini ship (?) in this wave. Like with past assortments, the figures come in varying rarity - green for common, yellow for rare and red for ultra rare. Being a fan of the Halo video games, I was familiar with all but one of the characters...the rare translucent hologram. Of course this is the one I ended up with! I was really hoping that I get one of the UNSC figures, the Brute or even the Grunt. 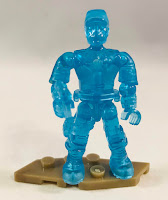 A quick Google search told me that the figure I pulled was Captain James Cutter. Apparently he first made his appearance in the Halo mythos in the Genesis book, which was a prequel of sorts to the Halo Wars video game. That's why I didn't know who he was...I just stuck to the mainline Halo games.

I really don't know what to say about the figure other than it's small, blue and translucent. He comes with a pistol and a figure stand. The problem with these translucent figures is that the sculpted detail gets lost without paint apps. I guess it's cool, but I can't say I was exactly thrilled. I kept thinking that I would try my luck again in hopes I'd get another character I'd know and appreciate more, but since this was a more or less impulse purchase, I haven't gotten around to revisiting the Mega Construx Halo toys since.
at 4:26 PM